A period drama set during the Depression? Based on a popular, critically-acclaimed novel? Starring an ensemble cast of superb acting talent? Well surely nothing can stop this awards-garnering juggernaut from winning... wait, is that Shia LaBeouf? (*sharp intake of breath*)


Shia is a bit of a divisive actor to have as your lead, isn't he? He's become the face of childhood-ruining bile but it's not really his fault. Okay, so he's starred in a few hugely-anticipated, ultimately dreadful duds, and he keeps mouthing off in interviews, but I still maintain that he's a good actor.

And yet, if you can't sit through two hours of him on screen without seething "you fucked up Indy with your Tarzan shit" then this might not be the movie for you, because he continues to play his usual 'earnest and cocky' shtick here. It would be a shame if you felt that way because Lawless - even with Shia retaining most of the screentime - is actually a well-crafted, immensely enjoyable film.

LaBeouf plays Jack Bondurant, one of three bootlegging brothers who have to fend off competition from gangs, stand up to local authorities demanding a cut of their profits and a hide from a creepy new Special Deputy who is determined to stamp down on their activities. Initially a timid lackey for his brothers, Jack must learn to stand up for himself and, at the same time, attempt to woo Bertha, the local preacher's chaste daughter. 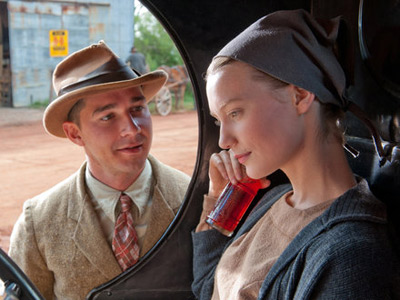 
It's all very typically 'gangster' - even allowing for an extended cameo from Gary Oldman as tommy-gun-touting racketeer Floyd Banner - but, thanks to the film's affection for its own dated Virginia setting, this is more vintage than violent; more quaint than cruel. Between the impressive acting from all involved and the classic cars, clothes and guns on display, the film becomes a loving ode to the era, with magnificent attention to detail.

Luckily for all those LaBeouf-haterz among you, Tom Hardy acts as a major second lead throughout the film. With such a hulking presence and a 'tough, emotionally-detached guy finds love' storyline all of his own, Hardy is the one you'll find most interesting in this film - cardigan an' all. It's a testament to his prowess as an actor that the funniest moments in the film come from his single non-communicative grunts. If, in Bane, Hardy managed to act in words and without expression, in Forrest Bondurant he manages the complete opposite - it's just as arresting to watch. 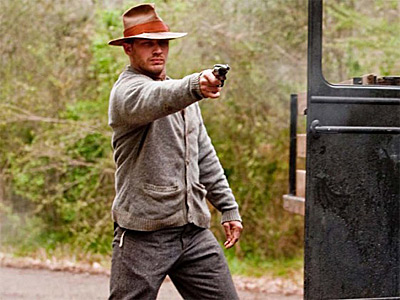 [Insert your own 'Hardigan' joke here]


Yet, for all the film's many triumphs, it is let down overall by a tone that swings from one extreme to the next. One scene that revels in the nostalgic tint of this golden age will immediately be replaced with one of jarring brutality; the twee countryside suddenly gives way to bloody fights of broken teeth and gory stabbings. Screenwriter and famed country goth Nick Cave explained somewhere that he was trying to emulate the book's shockingly graphic descriptions that would suddenly appear from nowhere, but the end result is like watching Last Of The Summer Wine and occasionally flicking over to watch Battle Royale on the other channel.

The film's unbalanced tone is further exacerbated by Guy Pearce's villain Special Deputy Charlie Rakes, brilliantly portrayed as a disturbing, unpredictable creep with borderline OCD. He's ultimately a far-fetched character in an otherwise traditional tale, yet Pearce is clearly invested in playing this eerie baddie, performing his scenes with as much conviction as any of the grittier, more rounded roles. 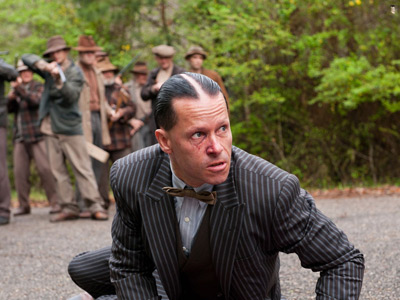 
These issues aside, Lawless remains a joy to watch – a demonstration in masterful acting and painstaking recreation of a golden-hued, bluegrass period not often explored in films. It's let down by a slightly silly and out-of-place ending, but otherwise Lawless is a hugely impressive achievement for all involved. Even Shia.

More:  Lawless  Shia LaBeouf  Tom Hardy  John Hillcoat  Nick Cave
Follow us on Twitter @The_Shiznit for more fun features, film reviews and occasional commentary on what the best type of crisps are.
We are using Patreon to cover our hosting fees. So please consider chucking a few digital pennies our way by clicking on this link. Thanks!