It’s no great revelation to say that biopics, by their nature, are fundamentally flawed. Unless somebody’s life follows a perfect three-act structure, unless the subjects really are two-dimensional models of greatness, and unless any number of indiscretions or inaccuracies can be overlooked without raising too many eyebrows, then biopics tend to fall into the viewing equivalent of the uncanny valley. While all of these still apply to Legend, the film makes up for it with one brilliantly simple decision: to treat the Krays like completely ridiculous, larger-than-life, cartoonish characters of fiction. And it’s probably safe to say that they are so much more fun that way.


It all depends on how hung up you are on the idea that filmmakers have a responsibility to portray their real-life subjects with the utmost conviction. To some, the impression that every scene, line and mannerism hasn’t been recreated with impeccable attention to detail is enough to ruin the entire movie. These are the people who will leave the cinema complaining about a complete disregard for historical fact because “I’m pretty sure I read somewhere that he ate a prawn sandwich before bludgeoning that guy, but they just completely left that part out!”. These people are also clearly mental.

But with Legend treating its vicious gangster protagonists with just as many touches of deft, daft humour as bursts of brutal violence, the question of adhering to realism becomes a little more pertinent. After all, if you really think about it, turning the unhinged, unpredictable, psychopathic - and candidly homosexual - Ronnie Kray into the punchline of almost every scene seems a little distasteful, doesn’t it?

But then this is exactly what makes the film so enjoyable. Or rather - and this will come as a surprise to no one - it is Tom Hardy's superb dual performance that makes the film so enjoyable. In fact, while Legend remains a compelling story about the rise and notoriety of two twin gangsters in 60s London, history fans might do better to not think of them as the Krays, but rather as the Hardy Boys, because it is the actor that we're really here for. And in terms of playing two completely separate personalities of twins divided only by a completely invisible split-screen, Tom Hardy absolutely Winklebosses it. 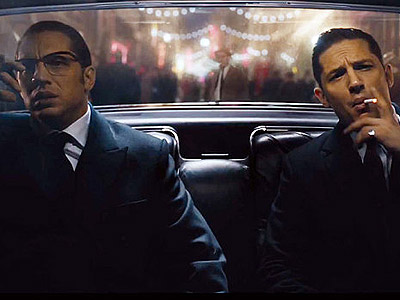 Tom Hardy sitting as far away from Tom Hardy as possible for some reason.


Hardy portrays his (leading) protagonist Reggie Kray with cockiness and control as he romances and then struggles to keep hold of girlfriend Frances while simultaneously building a criminal empire. Meanwhile Hardy also portrays his (secondary) protagonist Ronnie with mumbling incoherence, a sadistic schizophrenic who is both parts highly intelligent and completely clueless, and who wrestles with keeping his emotions in check, which incidentally leads to several hilariously frank admissions about his sexual activity. As such, Ronnie Kray is the character you look forward to seeing on screen most, which really is an uneasy thing to say when you consider the far more terrifying real-life Ronnie.

Elsewhere, Emily Browning somehow manages to stand out amid Hardy's powerful double act, with her love interest Frances played as both mentally strong and emotionally fragile. But there just isn't much room in the script for her to do much more than cry and look mournful at Reggie's continuing criminal activity.

It is also a strange decision on writer-director Brian Helgeland's part to have Frances provide narration for parts of the film when we don't actually see the story play out from her point of view. But then Helgeland does opt for a more stylistic approach to the film anyway. An opening CGI-ed skyline shot and the occasional sore-thumb use of Cockney rhyming slang suggests that this production comes from an American who merely views the 60s London gangster scene as little more than cute fun. 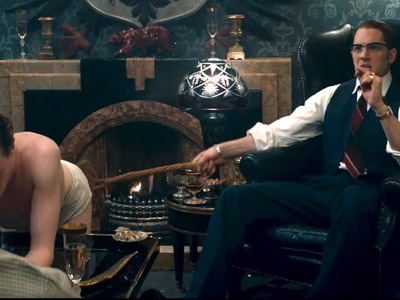 
And then there are the familiar biopic trappings. Predictably with this genre, we have a plot with few peaks and troughs that instead plays out like a steady treadmill of passing time, ending with an anti-climax followed by a text-on-screen epilogue.

All of which sounds like the film doesn't deserve many plaudits, but occasionally an actor's performance is so captivating and enthralling that it elevates everything around it. And here, Tom Hardy does that twice, at the same time, which - perhaps regrettably - becomes more fascinating than the Krays' story itself.

More:  Legend  Brian Helgeland  Tom Hardy  Emily Browning  David Thewlis  Christopher Eccleston  Taron Egerton
Follow us on Twitter @The_Shiznit for more fun features, film reviews and occasional commentary on what the best type of crisps are.
We are using Patreon to cover our hosting fees. So please consider chucking a few digital pennies our way by clicking on this link. Thanks!