There is a subtle moment in the first few minutes of Foxcatcher - a moment between moments, really - that I just couldn't shake. Gold medal-winning wrestler Mark Schultz (Channing Tatum) sits down alone at his table in an apartment that seems almost comically small for a man of his size. He has prepared himself some ramen noodles, presumably for his evening meal. Sitting in silence, framed against blank, beige walls, Schultz raises the spoonful to his lips but pauses for several seconds, staring intently at the noodles before putting them in his mouth. There is so much unsaid in that arresting pause; even this basic act of nourishment seems to be a struggle. It's a moment indicative of Foxcatcher as a whole; a glacial, passive drama where true emotions seethe beneath a surface of calm - until they can be contained no more.


This is a true story with room for three excellent performances, each given room to breathe and evolve. It's a career high from Tatum, who's at his physical and professional peak as Mark Schultz, the wrestler aiming to recapture Olympic glory while struggling to keep his head above water when not grappling in the squared circle. He's given a boost when taken under the wing of wrestling aficionado John Du Pont, an unrecognisable, astonishing Steve Carell playing one of the wealthiest - and weirdest - men in America. Reliable ol' Mark Ruffalo completes the trio as Schultz's altogether more well-rounded brother David, who quickly senses the toxic relationship between the pair and sets about getting to the bottom of it. 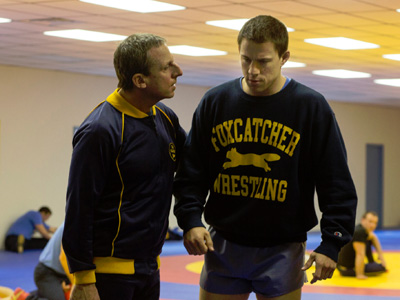 Tatum forgot his kit so was forced to wear the crusty spare.


Bennett Miller is in no rush to skip to the juicy parts of Foxcatcher, seemingly content to let the darkness creep. This is a film of such unbearable loneliness, the silence in which the characters sit feels like it might make your ears bleed. It depicts an intensely sad but all-too-familiar situation, in which a professional athlete uses crutches to substitute friends and family; Foxcatcher examines what happens when those crutches are taken away, or worse, used to abuse those who came to depend on them. In another early scene, Mark delivers a rousing, inspirational speech about the virtues of success to an audience of six-year-olds. It's so heartbreaking, it's no surprise when Schultz gives himself fully to the first person to show a vested interest in him - Du Pont is a man who shares Mark's values, but also his demons.

Tatum - body like Adonis, face like an Easter Island statue - is a revelation, dialling back the bravado that's made his career turnaround so much fun to watch. You come back to that big, dumb, sad face that was staring through that plate of noodles, jutting lower jaw only matched by his neanderthal brow, and how well it wears betrayal and regret and hopelessness. When those emotions eventually surface, they erupt in spectacular fashion, and suddenly Tatum is one of the most watchable men in Hollywood.

Sit him next to Steve Carell, however, and you'd be hard pushed to notice him. You've heard of actors disappearing into roles before, but this is some Harry Houdini shit: a vanishing act. It's not just the physical affectations he wears (prosthetic nose, liver spots, stoop) but Carell's speech patterns too that complete the disguise. A complex, tragic soul suffering from a starvation of affection, John Du Pont is a fascinating figure and Carell is nothing short of mesmerising. You look for Michael Scott but he's simply not there, except when John scores the film's big laugh: "Don't call me 'Sir' or 'Mr Du Pont' any more," he tells Mark. "I consider you a friend, and my friends call me... Eagle. Or Golden Eagle." 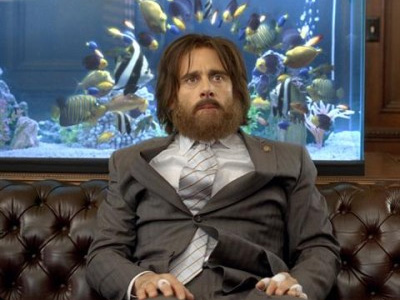 A master of disguise.


Opposite two such beguiling roles, Ruffalo has the thankless task of playing the most well-adjusted man in the room, but he does so admirably, his painted smiles quickly wearing him. His role takes on greater importance as Foxcatcher reaches its apex, still with around an hour to go, slowly slipping into the dark territory you knew was coming. There are lots of ponderous glances and silent exchanges and there is no shortage of lurking in doorways, but Foxcatcher is at its most affecting when Ruffalo and his screen brother/training partner literally wrestle with their problems, letting their bodies express what their brains cannot.

Seasons change, and when a harsh winter on Foxcatcher farm rolls around, the film finally reaches its chilling conclusion - although by this point, you may have already been left cold. Miller takes his time getting to the denouement - thanks to some welcome detours via Vanessa Redgrave's matriarch - but Foxcatcher is purposely paced to frustrate, a dish to be savoured slowly: it's a movie that's better digested by concentrating on the moments between mouthfuls.

More:  Foxcatcher  LFF 2014  Bennett Miller  Steve Carell  Channing Tatum  Mark Ruffalo  Sienna Miller  Vanessa Redgrave
Follow us on Twitter @The_Shiznit for more fun features, film reviews and occasional commentary on what the best type of crisps are.
We are using Patreon to cover our hosting fees. So please consider chucking a few digital pennies our way by clicking on this link. Thanks!