It should probably come as no surprise that it takes a film so hilariously absurd and so utterly surreal to provide what is actually very insightful commentary about the nature of everyday relationships. Sure, this is a film where people are threatened with animal transformation, where people hunt each other in the woods and where, at one point, Colin Farrell tries to take off his trousers while having one hand shackled to his belt, but this film exposes more home truths than a shelf full of self-help books. And it may all seem like ludicrous nonsense on the surface, but what it has to say about love, fidelity and dependency is more revealing than anything Farrell wears under his kecks.


Let’s start at the beginning. Colin Farrell’s sad sack David is smarting from a serious break-up and so attends a hotel – a dating farm, if you will – where the intention is to pair off with one of the other guests within a given timeframe. If you do not achieve newfound love in this time, then you must instead undergo a transformation into an animal of your own choosing (in David’s case, a lobster because “they live for a long time” and because he “likes the sea”).

During their stay, the guests take part in various bonding activities, chief of which is late-night hunting of those previous guests who have escaped the hotel and now roam free as single people in the woods outside. For every single person shot with a tranquiliser dart, you get given an extra day added to your timeframe for finding true love at the hotel. Are you following? Are you sure? Because I can guarantee that no matter how bizarre this premise sounds, it is far stranger when played out in the film. 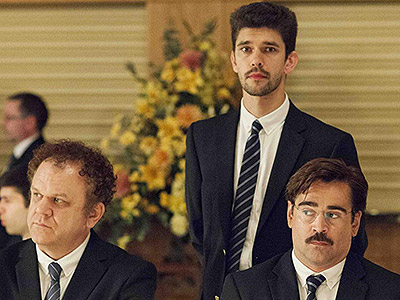 Start queuing at your leisure, ladies.


Part of this is down to the performances, with everyone giving clipped, deadpan line deliveries no matter the peculiarities at hand. While the guests in the hotel – including Farrell, John C. Reilly, Ben Wishaw and Ashley Jensen – convey pathetic timidity, emphasising not only their vulnerability but their complete desperation to find a new mate, Olivia Colman’s hotel owner oversees them all with baffling self-assurance and authority. It all makes for a series of inexplicable situations where the most pedestrian of lines can suddenly become gut-bustingly funny.

Beyond the curiosities though, this is a film that satirises the very nature of relationships in twisted, but ultimately relatable, ways. Each guest, for example, goes to great lengths to find common ground with any potential suitor, no matter how appropriate that ground is. In David’s case, he is obsessed with other people – both possible mates and love rivals alike – being as short-sighted as he is. Ben Wishaw’s limping guest hopes to find a woman who has a similar hobble (when his friends give him hope of a new arrival who looks to have a limp, he mournfully replies “no, it’s just a sprained ankle”, writing off any hope of them being compatible).

It is when the guests start to fake mutual interests just to pair up with someone that both the plot and the message evolves in interesting ways. A willingness to lie just to be with someone ultimately results in unsatisfying love matches, and in David’s case, the whole pairing backfires and he ends up running away to join the singles. There, running free in the wilderness, it is implied that he can enjoy a newfound freedom, but he soon learns that singledom is a just a different kind of prison to coupledom. 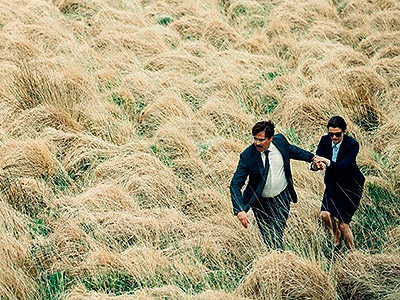 
Accepting a life in the great outdoors and agreeing to enforced rules of chastity in the process, David’s story becomes less enjoyable than when he was in the more accessible farcicalities of the hotel, but it is here that he finally meets Rachel Weisz, and the film gets to explore its themes to the fullest. Namely, if every relationship we have seen up until this point is based on unhealthy compromises, is there actually ever such a thing as true love?

The complexities of the issues at hand in the context of this surreal situation means that as the plot spirals away from its starting point, it can often feel a little rambling and drawn out. But it remains a fascinating and hysterical film that packs a brutally honest punch at its emotional core. The greatest lesson it teaches us, however, is that, while we may not recognise the ridiculous facets of this particular story, there’s no denying that – as a species – we are actually already ridiculous.

More:  The Lobster  Yorgos Lanthimos  Colin Farrell  Rachel Weisz  La Seydoux  Ben Whishaw  John C Reilly  Olivia Colman
Follow us on Twitter @The_Shiznit for more fun features, film reviews and occasional commentary on what the best type of crisps are.
We are using Patreon to cover our hosting fees. So please consider chucking a few digital pennies our way by clicking on this link. Thanks!