It's a tricky thing to underpin the emotional core of your movie with a giant CGI monster. Hypothetically speaking, you could have a massive tree creature offering support to a little boy coping with his mother's terminal illness and, every time he walks away, some members of the audience might get distracted by the behemoth's huge bark-buttocks chafing with every step. Hypothetically speaking.


It's not that A Monster Calls doesn't already allow for some levity, however. There's actually a generous amount of sweet humour in this fantastical film, which otherwise often struggles in its attempt to be both wonderfully whimsical and powerfully poignant at the same time. Overall, it's fun and smart, but all its roots are bedded in emotion, with anger and frustration giving way to tissues and tears as the story progresses.

Lewis Macdougall ascends the usual problems with 'kid-acting' by giving a truly heartfelt performance as Connor, the mature, toughened young daydreamer becoming more isolated as he is left to look after himself in the wake of his mother's (Felicity Jones) illness. He gets visited in the night by a thousand year-old yew tree (an unfortunate detail in a film about a child), which suddenly sprouts legs, fiery insides and Liam Neeson's gravitas. The tree is here, it says, to tell a bitter and unimpressed Connor three tales, before Connor must, it instructs, tell the tree a fourth. 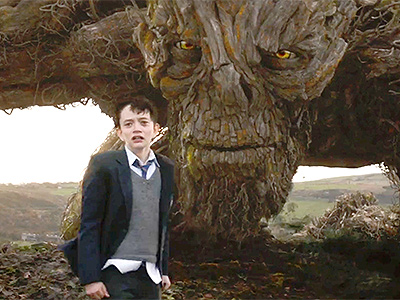 "But my mum always tells me off for telling tales"
"Well, that's not going to be a problem for much longer."


The tales themselves are fables that deliberately subvert and question fairytale formulae in order to be more representative of the often unfair, true nature of real life. While these are obviously designed to help Connor slowly confront his own feelings, they are charmingly rendered on screen as animated watercolours brought to life with every fresh splash of paint.

These distinct segments merge with the monster, who weaves in and out of them like a well-choreographed Ent and who, in turn, encroaches on Connor's real life in unexpected but seamless ways. The result is a glorious, colourful mesh of styles that reflects Connor's inner conflict and turmoil; a melody for his mother's malady, if you will.

As might be predicted, the tree's tales are connected thematically to Connor's real-life tragic situation - for example, the wicked witch stepmother of the first story comes at a time when Connor is refusing to cooperate with his strict disciplinarian grandmother (Sigourney Weaver). But the parallels work on a deeper, more subtle level too. The destruction that Connor indulges in during one tale plays out in real life with him angrily lashing out at his surroundings, and all of this - we discover later - coincides with his mother having 'a funny turn' in the hospital. A bad reaction, indeed. 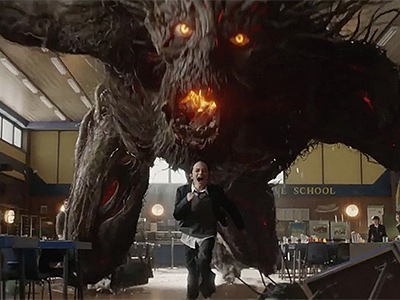 "AAAARGH I'm going to fuck your shit up, cancer!"


Overall, the film effectively manages to pull off a difficult proposition: exploring the way in which a child processes grief using the framework of an epic fantasy anthology. At times the film feels too derivative, and often the monster's vast experience comes across as arrogance, as if the big tree could have easily been voiced by Vin Diesel repeating "I Am Astute" over and over again.

But, on the whole, it works extremely well, with audiences much more likely to buy into the emotional investment of each scene rather than, say, get distracted by gigantic hairy bum fluff made of moss. Hypothetically speaking.

More:  LFF 2016  London Film Festival  A Monster Calls  JA Bayona  Lewis MacDougall  Felicity Jones  Sigourney Weaver  Toby Kebbell  Liam Neeson
Follow us on Twitter @The_Shiznit for more fun features, film reviews and occasional commentary on what the best type of crisps are.
We are using Patreon to cover our hosting fees. So please consider chucking a few digital pennies our way by clicking on this link. Thanks!