Remember that sequence in Spaced, where Tim gets out of a bind by initiating a pretend shootout with finger guns, safe in the knowledge that no one in the near vicinity can resist joining in? Ben Wheatley's new trigger-happy triumph plays out exactly like that, complete with stylised slow-mo, only with real guns, real bullet wounds and with it all carrying on for a real long time.


I say 'real' but, with each new film, Wheatley's unique style as a filmmaker is becoming slowly more definable, and one common element is his use of a fictional reality; a hyper-fantasy world that allows for exaggeration.

So, in this film about a weapons deal gone bad and the subsequent extended shootout, all played out in real time, muzzle flashes are everywhere, ammunition is seemingly endless (except for when it serves the film) and people react to getting shot in the legs, arms and arse with angry retorts. You wouldn't be surprised if the bullets turned out to be imaginary and the abandoned warehouse in which it all takes place turned out to be a playground. 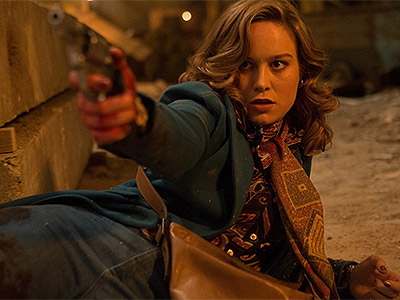 
There's not much to look for beyond the surface - the film is very much single-barrelled in terms of plot - but it still hits the mark. The action is self-evident, but there are plenty of laughs and even a few shots of gratuitous gore too, just to keep the film loaded with entertainment. Given its singular focus, tight time setting and even tighter location, it's a remarkable achievement by Wheatley. It's his .44 Magnum opus, even if it is by no means a masterpiece.

The humour throughout is clear, but for all the frequent chuckles it gives, there are very few memorable howlers. For every actor playing it straight (Brie Larson, Cillian Murphy, Michael Smiley), there's the junkie loser (Sam Riley), the unruffled, experienced facilitator (Armie Hammer) and well, Sharlto Copley, who all get the best moments. 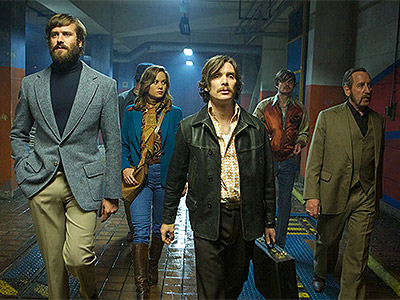 
Copley, in particular, is the scene-stealer here, his character being far too concerned with the briefcase of money in play, making advances on Brie Larson and damage to his sharp suit than with the many bullets whizzing past his head, but the laughs come more from his delivery than the scripted lines. Although it's still a credit to Wheatley to let him push the role as far as he does.

Meanwhile, the 70s aesthetic lends the film an undeniable cool factor, but it isn't the instant cult classic it thinks it is. In fact, Free Fire's banter-to-violence ratio means that, at times, it feels like little more than Tarantino posturing ('Reservoir Dogs meets The Hateful Eight' isn't far off the mark here).

And yes, the film succumbs to obvious flaws too. Allegiances are formed and swapped without much sense and all of the shooting gets a bit tiresome after a while. The result is a whole lot of chaos that's fun, but is often hard to follow. And yes, I know that's exactly the point of a film throwing its audience in the middle of a mass shootout, but er... (*pulls finger gun from imaginary holster*) pew! Pew pew! Pew!