Did you know you can kick a man’s head off? Like, clean off his shoulders? Or witness what a face looks like after it’s been stomped by a pair of size 10s? Have you ever seen a jaw literally, literally drop to the floor? How about enjoying funny guy Vince Vaughn in a prison movie with brains, but those brains are frequently splattered across the concrete ground? Before I saw Brawl In Cell Block 99, I wasn’t aware of any of these things. God, I was a different person back then. It is, as a colleague described it, the Citizen Kane of facial trauma movies. It’s Grade A Grindhouse. It’s V For Vaughndetta. It’s not like anything you’ve ever seen before.


S. Craig Zahler’s follow up to Bone Tomahawk is a brutal tale of violence, vengeance and viscera with a vice-like grip on your senses. Vaughn is Bradley (not Brad) Thomas whose journey to Cell Block 99, the titular prison within a prison, is a literal descent through the nine circles of hell. The big guy is on top form as a recovering alcoholic whose day goes from bad to worse after being laid off and then discovering his old lady (Dexter’s Jennifer Carpenter) has been seeing someone on the side. His response is to dismantle her car with his bare hands, a scene that at the time seems over the top but makes perfect sense later on. Here is a man whose singular focus means nothing can or will stop him from working out his rage. Skip forward eighteen months and after a drug deal gone wrong, Bradley is facing a seven-year stretch and will miss the birth of his daughter. 70 minutes in and it’s so far, no brawl, but the deliberate slow burn to his incarceration is the calm before the bloody storm that is about to erupt in your face. 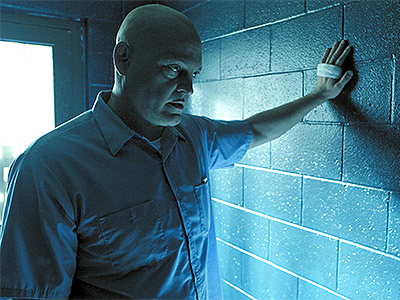 
A visit from a creepy German (Udo Kier, whose long fingernails are the least repellant thing about him) informs Bradley he is now seriously in debt to a Mexican drug cartel, and the only way to repay is to kill another prisoner currently residing in a different maximum-security jail. Bradley has to inflict enough damage to get transferred to the notorious Red Leaf prison, or else something very, very bad will happen to his kidnapped pregnant wife. The hideous danger hanging over her swollen belly is extremely shocking, but serves to show just how far beyond the acceptable Brawl In Cell Block 99 is willing to go. Honestly, you see a man’s face scraped off, but this chilling threat is enough to make you feel really icky.

Thus his bone-splintering odyssey begins and Bradley doesn’t want to waste any time. Guts are pummeled and arms are snapped in a matter of minutes in order to get his ticket to the bad place, all performed with stoic precision. Zahler frames the violence with full body shots and minimum edits, meaning there are no cut-aways from the stomach-churning sights of bones breaking through skin or skulls being smooshed through the surface of a face. The fight scenes are almost beautiful, reminiscent of a Fred Astaire dance scene, twirling and gliding and well choreographed, except with more claret and grey matter splashing around. 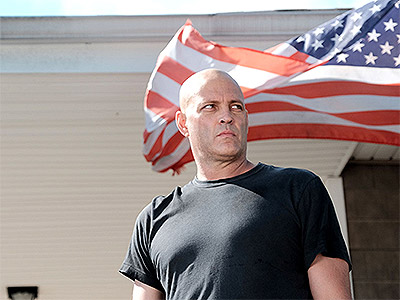 
However, it’s Vaughn who gives the film its killer punch, over and above the violence. His comedic chops are restrained even if his fists aren’t, delivering dry witty jabs rather than his trademark motor-mouthed bants. Bradley’s physique is enough to make the prison guards swoon ("What are those muscles for?") and take bets on how tall he is, but interestingly he’s not overly ripped and is even slightly doughy in places, revealing a surprising soft underbelly to a skinhead who doesn’t think twice about driving a boot through a man’s skull. It’s all in the name of love though, so it’s OK.

If you can handle the painstaking pace and the ultra, ultra violence, what’s left is a deep and psychologically complex performance that will more than likely kick start the Vaughnaissance. Brawl In Cell Block 99 will get all up in your face, your brain and your stomach and make you see Vince Vaughn in a whole new light. Things will never be the same again; don’t say I didn’t warn you.

More:  Brawl In Cell Block 99  Vince Vaughn  S Craig Zahler  Bone Tomahawk
Follow us on Twitter @The_Shiznit for more fun features, film reviews and occasional commentary on what the best type of crisps are.
We are using Patreon to cover our hosting fees. So please consider chucking a few digital pennies our way by clicking on this link. Thanks!