Following on from 2015's A Bigger Splash, Luca Guadagnino continues his fascination with swimming pools, sultry Italian summers and dancing men with a heartbreaking coming-of-age tale set in 1983. It's a film so alluring and luminous it almost makes up for the fact I never experienced a holiday romance of my own. Who knows what could have happened had Armie Hammer's family ever decided to holiday during the late 90s at Rockley Park, Bournemouth's premier caravan park? While I lament the life that could've been, I'll have to content myself with this transcendental account of first love that is the very definition of bittersweet. It's seductive, sensual, and at one point someone ejaculates into a peach. It's got everything.


Seventeen-year-old Elio (Timotheé Chalamet) is spending his summer being bored in his parents' impossibly stylish villa. Confident and ridiculously smart, he hangs around smoking cigarettes being all bilingual and comfortable with himself, liked by everyone who meets him. His summer plans go off on a tangent when American student Oliver (Armie Hammer) rocks up in his pastel shorts and hi-tops. Full of braggadocio and looking like a Ralph Lauren model with a penchant for bopping to pop music, Elio has met his match and is immediately transfixed. 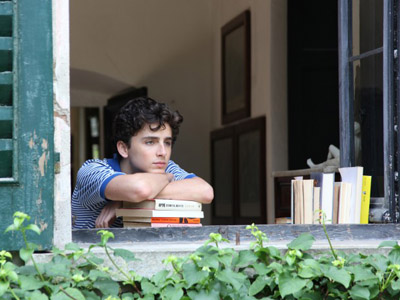 If you're that bored read one of your books mate.


Their romance is more of a slow burn than a whirlwind, the two circling each other in sun-drenched fields with the occasional brush of skin and glances that last a second too long. The fact this is against a backdrop of 80s fashion, electronica and a Sufjan Stevens soundtrack makes for a heady experience that's hard to shake. Guadagnino obviously wants to set up his homeland as a land of sensual delights, and Call Me By Your Name will make you long for endless evenings spent drinking prosecco, skinny dipping at midnight and lingering kisses in the moonlight. Moreover, it will make you wish that you could be captivating enough to pull someone like Armie Hammer.

At the centre of it all is a remarkable performance by Chalamet, who delivers enough nuance not to make the precocious Elio an annoying little shit. He carries the right amount of arrogance and provides a refreshingly different look at sexuality. Although tempted by the occasional juicy peach, the teen never questions his desires or wrestles with his sexuality and is as much in control as his older lover. When Elio casually tells Oliver: "If only you knew how little I knew about the things that matter", Oliver (seemingly innocently) questions exactly what things. Looking him in the eye, Elio murmurs, "You know what things", and Oliver is left in no doubt as to his intentions, as are we.

Hammer is equally mesmerizing as the all-American jock in short shorts whose masculinity oozes off the screen and casts a beguiling spell over his paramour and audience alike. At first unlikeable, departing each scene with a casual "later", he gradually unfurls to Elio's advances and it's hypnotic to watch. Full of sensuality and emotion, the screen loves him and Hammer shows an unprecedented depth we've not seen from him before. And did I mention the tiny shorts? 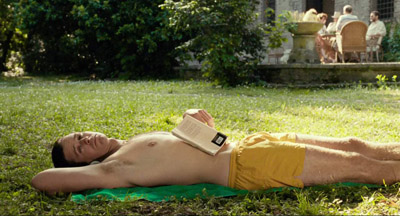 Going to need a minute here.


With such joy there is also sadness, and Call Me By Your Name perfectly captures that sweet ache of first love that never leaves you. There's the breathlessness of snatched moments and the first forays into sexual awakenings, illustrated beautifully by long shots of fruit ripening on trees and the lengthening shadows of summer announcing the end of this holiday romance. To translate Joan Baez's "Plaisir d'amour", the joys of love are but a moment long, (but) the pain of love endures the whole life long, and this is perfectly encapsulated in a conversation between Elio and his father (Michael Stuhlbarg), which is one of the most heart-wrenching speeches ever dedicated to film. To try and paraphrase it here would be a great disservice, but it serves as a sweet coda to Elio and Oliver's relationship and will leave you in pieces before an equally devastating end credits scene.

Sultry and oh-so sexy, Call Me By Your Name is a masterful piece and romantic enough to win over even the hardest of hearts. It may seem difficult to feel sympathy towards Elio, given his liberal and understanding parents and the fact he's pulled Armie Hammer in his prime, but if offers such a powerful account of love, it'll make you wonder if you've ever experienced anything this profound. And if it doesn't, you can just enjoy Armie dancing in his shorts instead.

More:  Call Me By Your Name  Timothee Chalamet  Armie Hammer  Michael Stuhlbarg  Luca Guadagnino
Follow us on Twitter @The_Shiznit for more fun features, film reviews and occasional commentary on what the best type of crisps are.
We are using Patreon to cover our hosting fees. So please consider chucking a few digital pennies our way by clicking on this link. Thanks!