You would think that a film about shrinking people down to miniature size would primarily be about doll houses and hilariously oversized pencils – and there is a lot of that here – but mostly Alexander Payne’s new 'short' film is concerned with socio-political issues and climate change. It’s a film that says you should be doing more for your fellow man and for the environment. Basically, it has the power to make you feel very small indeed.


This will come as a disappointment for those that just want to see a pocket-sized Matt Damon act as some kind of Borrower Bourne. And, to be honest, that is a much more enticing prospect than what we actually get: a journey of self-discovery with as many Very Important Messages as funny moments. It’s a dramedy that will leave you feeling the same sense of bemusement that you get whenever you hear the word 'dramedy'.

It all starts when Matt Damon’s stuck-in-a-rut occupational therapist looks to make a fresh start with his wife Kristen Wiig, and becomes enamoured with a relatively recent social trend: to get shrunk down and live forever in a little town populated with other such volunteers. As explained at the start of the film, this is a scientific breakthrough designed to save our planet from over-population, but as becomes apparent, those that sign up for the procedure have financial motives rather than ecological ones. After all, when property is tiny and dinners are crumb-sized, everyone can afford to live the high-life… albeit while very low down to the ground. 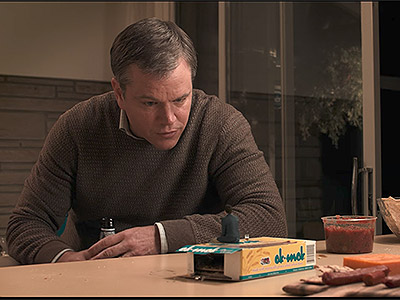 
It all sounds like the perfect remedy for Matt Damon’s life woes and listlessness, but when a post-op spanner is thrown in the works, he is forced to live a different lifestyle to one he expected and discovers a less idealistic side to the diminutive society he has joined. It’s at this point that the film doesn’t seem interested in its own central concept any more, ironically choosing instead to explore far bigger issues.

Up until this moment, Alexander Payne and co-writer Jim Taylor raise some really interesting points about the practical implications of 'going small', and not just in presenting the absurdity of the surgical process itself or in the workability of reproducing life to a smaller degree (the fact that early scenes are littered with props that haven’t quite got the scale right is a stroke of genius). For instance, when a drunk guy at a bar belligerently argues that miniaturised people don’t deserve the right to vote because they are contributing less in tax and to the economy, you start to realise the true size and scope of this 'small' concept.

And yet Payne basically starts to ignore the idea halfway through, with Matt Damon meeting Hong Chau’s one-legged humanitarian cleaner and starting a road to discovering what’s really important in life. Maybe it’s an attempt to avoid over-egging the one-joke gimmick, or maybe it’s a subtle way of saying that size doesn’t really matter, but it’s hard not to feel that, at this stage, Downsizing is going back on its promise of "haha, little people". 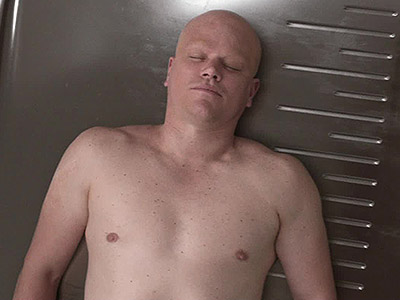 
Scene to scene, the film is still very enjoyable and makes good use of the time it spends portraying this unique social scenario, but a lot of its charm relies on its actors. While Damon is hardly stretching himself here, his everyman schtick with just the hint of sad-sack providing a decent backbone to hang the story on, he still manages to deliver some of the best moments, including a great scene that sees him tripping balls at a house party. Meanwhile Wiig is underused, even if for legitimate narrative reasons, and Christoph Waltz relishes his Euro-lothario character Dusan, living a party life while dealing in shady black market deals on the side. It is, however, Hong Chau who is the standout star here though, maneuvering from amplified scolding to heartbreaking timidity at the drop of her character’s broken, wooden leg.

And yet, even she is just one piece in Payne’s jigsaw puzzle of ideas, which all go underserved as the film refuses to commit to any one of them wholesale. Downsizing begins as an oddball comedy about how a society of voluntary little people would work in the real world, and then switches out the concept entirely for a far more preachy latter half drowning in Payne’s familiar sentimentality. Between exploring the miniaturisation concept, it’s resultant problematic austerity, themes of idealism and naivety and - because of course this is the main issue somehow - the melting ice caps, Downsizing could really have done with some reduction of its own.

More:  Downsizing  Alexander Payne  Matt Damon  Hong Chau  Christoph Waltz  Kristen Wiig
Follow us on Twitter @The_Shiznit for more fun features, film reviews and occasional commentary on what the best type of crisps are.
We are using Patreon to cover our hosting fees. So please consider chucking a few digital pennies our way by clicking on this link. Thanks!