Arriving at the London Film Festival without so much as a fanfare or even a comical parp on a tuba, Headhunters is a thriller from the same production house as the Millennium trilogy, which naturally led me to begin prepping me 'The Film With The [Blankety] [Blank]' puns.


In fact, the two entities have little in common – surprising that, given that the Scandinavian film industry is a little bit bigger than my xenophobic brain can process – other than the fact that both are extremely competent thrillers in which the language barrier matters very little. The Jo Nesbo book wasn't half as ubiquitous as the Steig Larsson trilogy, but like Lisbeth Salander's adventures, Headhunters is already getting a remake, which should tell you all you need to know about how accessible and fun it is. 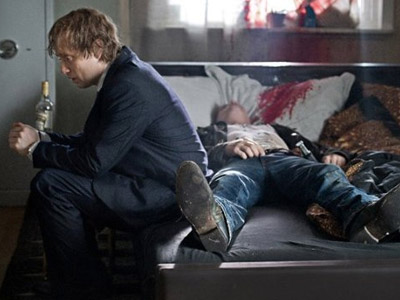 Never underestimate how cheap booze is in Norway.


Roger (Aksel Hennie) is our so-called hero; a high-flying headhunter for a technology company and the holder of the keys to the cushiest job in all of Norway. He's also an art thief, who sounds out his potential victims in their job interviews before popping round their gaff with a stanley knife and a ski mask. Embracing a life of crime to fund his extravagant lifestyle and keep his premier league wife happy, Roger comes a cropper when he attempts to screw a new client, Clas Greve (Nikolaj Coster-Waldau), who happens to be an ex-special forces tracker – one who doesn't take kindly to being robbed. Cat, meet mouse – you guys will get along thrillingly.

Headhunters is really more of a satire than it is a genuine goosebump-inducing thriller, beginning with a line-up of dislikeable characters that you're quite happy to see put through the wringer. As bloody and visceral and tense as the action gets, you'll meet it with snorts of laughter rather than gasps of concern. I hesitate to call it Coen-esque, although they seem to have cornered the market on murderous thrillers that verge on the absurd, but there's a wicked streak of pitch black humour running through Headhunters that ensures the mayhem isn't taken too seriously. 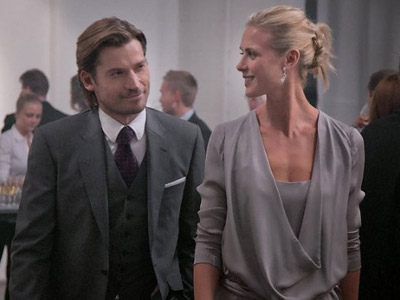 Something something David Beckham joke.


I say mayhem, and I mean it. Poor Roger is basically tenderised over the course of a couple of hours. Car crashes, gun-fights, getting covered from head-to-toe in liquid shit: Jason Bourne might have had a fight on his hands but he never had to wash poo out of his hair. The onslaught is relentless, but thanks to a neat line in tension-deflating visual gags and the fact that Roger isn't exactly the most sympathetic fellow, you've got a hugely enjoyable, unpredictable thriller that never forgets to be fun first and foremost.

Hollywood take note: In Bruges director Martin McDonagh to helm the remake, please. The only tragedy about translating it to the English language is that the title isn't half as comical as the Norwegian original. Honestly, it's like they want us to think they talk like this.

More:  Headhunters  LFF  Aksel Hennie  Nikolaj Coster-Waldau  Synnve Macody Lund
Follow us on Twitter @The_Shiznit for more fun features, film reviews and occasional commentary on what the best type of crisps are.
We are using Patreon to cover our hosting fees. So please consider chucking a few digital pennies our way by clicking on this link. Thanks!