My uptake of films from the London Film Festival has been pretty slow so far – curse you, day job! – but with Shame marking another notch on my metaphorical bedpost, I'm three for three for excellent movies so far. If I were a Radio 1 DJ, I might describe it as "a non-stop hit parade of massive club bangers", but I'm not, so I'll just say I've seen three cracking films in a row, and hooray for that.


Steve McQueen (the director, not the ghost) first hooked up with Michael Fassbender in prison drama Hunger, with the actor playing Irish republican Bobby Sands, an inmate on hunger strike. I didn't see it, but it has some fairly obvious parallels with Shame, namely a fearless, raw performance from Fassbender, who's required to shelve any pride and/or body issues in his role as Brandon, a man suffering from sex addiction. Not the caught-with-their-pants-down 'sex addiction' of celebrity adulterers, but the real deal – a compulsive urge for coitus that sees Fassbender's addict masturbating constantly at home and at work. Tiger Woods is also a massive wanker, just not in the same way.

Though it's played straight, the fairly unique subject matter naturally leads to moments of levity, although McQueen is careful never to stray into out-and-out bawdiness. The story is kickstarted by Brandon's sister Sissy (Carey Mulligan) crashing his plush New York ad, which almost immediately puts further cracks in Brandon's already fractured lifestyle. When Sissy accidentally barges in on her brother whacking off, it's a brief moment of comic relief, but Brandon's aggression quickly turns the scene nasty. The tragedy is that when he's not acting on his hormones, he's a perfectly nice gentleman – just one with a metric fuck-tonne of filth on his hard drive. 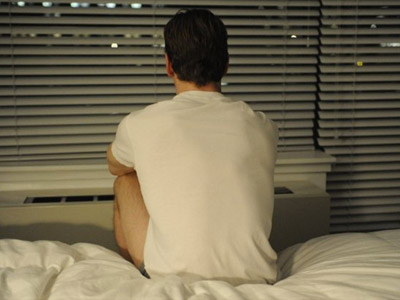 
Therein lies the schism of Shame: a portrait of a good man being ripped apart from the inside by rampant urges he doesn't understand – who craves sex but has a life completely bereft of intimacy. Fassbender is up to it, never coming across as a sleaze or a player – there are barely any 'seduction' scenes as in Roger Dodger, rather we skip straight from the flirting to the fucking. There's precious little smarm too, although that's offset by Brandon's tragically naff boss, played by James Badge Dale (who's hand has grown back since he appeared on 24). Brandon is a complex role that requires a great deal of internalisation, but Fassbender nails it. LITERALLY. (*falls down stairs carrying cymbals*)

As in Hunger, McQueen lets his camera roll indiscriminately, capturing moments of extreme tension and awkwardness in the long silences between – what I presume to be mostly improvised – dialogue. The sex scenes are graphic and numerous, shot mechanically for a reason, but Shame is a stylish movie through and through. New York – lit up and sparkling like a strip club – has rarely looked better, and neither has Fassbender (top scarfing, great winter wear). The score is brilliant too, lending the sex scenes a gravitas that Fassbender's cum-face can't quite provide on its own. 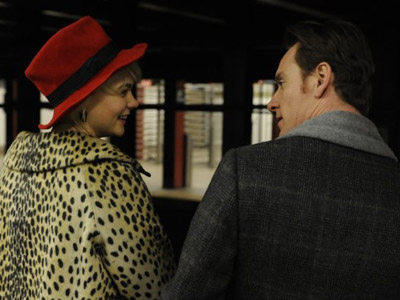 He'll fuck a hole right through your stupid hat.


There are moments that are somewhat ham-handed (pun most definitely intended), like Fassbender sexing a woman up against a wall with graffiti reading 'FUCK' written on it in giant letters, or his record player spinning 'I Want Your Love' when Brandon finds his equally needy sister come home to roost. Conversely though, Shame doesn't pretend to have the answers to Brandon's affliction, nor the root of his animosity towards Sissy, and doesn't bother to peddle any easy answers – don't expect much in the way of resolution.

Shame is a snapshot of a tumultuous life, shot without judgement and censure – the fascinating story of a man who seemingly has everything and nothing both at once. It is also a really, really shit date movie.

More:  Shame  LFF  Michael Fassbender  Steve McQueen  Carey Mulligan
Follow us on Twitter @The_Shiznit for more fun features, film reviews and occasional commentary on what the best type of crisps are.
We are using Patreon to cover our hosting fees. So please consider chucking a few digital pennies our way by clicking on this link. Thanks!