It’s got awards buzz written all over it. It’s based on a true story with all the focus on one man, played with complete conviction by a two-time Oscar winner. It’s a gripping, compelling, terrifyingly tense drama delivering complete authenticity and utmost sincerity. Welcome to Hanks! In An Adventure With Pirates!


On the face of it, this one-man sea shanty looks like the kind of Oscar-grab that showcases its star’s hugely impressive ability to carry an entire film by themselves, complete with tragic heartbreak scenes and righteous acting chops. But Captain Phillips is a refreshingly simple tale, with no discernible showboating from either Hanks or director Paul Greengrass.

It’s a film where realism is key, but not the fake kind of Hollywood realism where everything is DARK and GRITTY and SUPER-TRAGIC. No, this is a film in which you are given just enough information about characters to get a sense of them as real people complete with moral ambiguities. It’s a film that spends as much time on true-to-life protocols as thrills and spills. And it’s a film in which Tom Hanks sweats unattractively from his man-boobs. Talk about uncompromising. 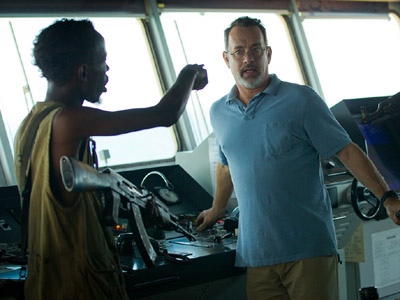 A gun right there, and yet Phillips is terrified of this man's finger.


Also refreshing for a film of this status is that there is very little in the way of set-up. After just a short car journey taking our captain to his fateful voyage, we are given a lengthy scene where the dangerous Somali pirates choose their ransacking crew and that’s it – we are then officially in stress-building territory. Then, despite the film being roughly split into two parts – the pursuit and boarding by the pirates followed by the second-half Hanks-napping – the film never really lets up. There’s constant tension-ratcheting at every turn with huge credit to Greengrass, who shuns his usual dizzying, dynamic approach to wring pressure points from every scene using a surprisingly economical approach to his storytelling.

Of course, all eyes are still on Hanks in this film, and its attention that is well deserved. The veteran everyman is nothing short of astounding, underplaying his hero role at every step and yet making him appear so superhumanly fearless that you’ll happily board any ship of his going into any unchartered waters gleefully shouting “O Captain! My Captain!” Despite an understated performance throughout, Hanks still gets one major heavyweight acting scene that appears right at the film’s end, and it is one of the best of his entire career. It’s a moment that will be your lasting impression of the whole film and is a scene so utterly heart-wrenching it's akin to watching your own father cry. 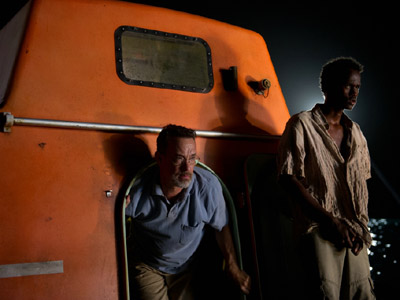 Did anyone else do a double-take at this man's crotch?


Kudos also goes to newcomer Barkhad Abdi as Muse, the leader of the Somali pirates who, despite a huge cultural difference, is a canny and cynical criminal with nifty shades of grey to make him so much more than the 'anonymous, villainous hijacker' he could have so easily been. What this skeleton-thin pirate lacks in an eye-patch and peg-leg, he makes up for with a shrewdness and a burgeoning respect for our protagonist.

When the film is inevitably remembered come Academy Awards time with glossy ads emphasising the film's worthiness 'for our consideration', the ensuing attention is likely to diminish this film's otherwise honest tone and modest authenticity. And yet, while it's hard to think of a performance given so far this year more deserving of the Best Actor Oscar, it will seem strange for the award to be given for such an unassuming role. I mean Captain Phillips isn't even the slightest bit disabled or mental.

More:  LFF2013  Captain Phillips  Paul Greengrass  Tom Hanks  Barkhad Abdi
Follow us on Twitter @The_Shiznit for more fun features, film reviews and occasional commentary on what the best type of crisps are.
We are using Patreon to cover our hosting fees. So please consider chucking a few digital pennies our way by clicking on this link. Thanks!