Joseph Gordon-Levitt is impossible to dislike. The bastard. Attractive, talented, creative, industrious and brilliant at karaoke, he's the kind of self-made leading man who you actively will towards success – as opposed to all the no-talent shit-for-brain himbos for hire who I actively will towards homelessness. Gordon-Levitt's directorial debut Don Jon is certainly an accomplished and confident first film, but I can't help but think a lot of the praise it's receiving is directed at its star and not its screenplay – subtract all the personal goodwill that Gordon-Levitt has banked over the years and Don Jon remains a good film, just perhaps not a great one.

Not pictured: me, in a nightclub with anyone this attractive, ever.


As you may have guessed, Don Jon does not play out like your typical romance. Scarlett Johansson appears to be the object of his affections as Jon's equal – scorchingly hot but bracingly vacuous plasto-person Barbara – but there's little courtship to speak of. Gordon-Levitt's screenplay actually has aspirations of deconstructing the romcom, comparing Jon's love of porno to Barbara's love of cheesy Hollywood shlock, although the two subjects never quite mesh. One neat visual gag at the local cinema sees the pair exit from a Tatum/Hathaway topliner and move in for a kiss, emulating the screen stars by embracing to swelling music, except surrounded by grotty popcorn vendors and pachinko machines. Had this school of thought continued throughout, Don Jon might have been more than a simple, enjoyable comedy; as it is, it's a missed opportunity to skewer a genre that Don Jon so clearly has no interest in being part of.

There is no shame in a movie being slight as long as it's tight, and Don Jon: The Film is as uncomplicated as Don Jon: The Person. Jon's obsession with routine – sex, cleaning, driving, gym, church, partying, shagging, repeat ad infinitum – gives the movie a neat structure which Gordon-Levitt is then able to disassemble the more Jon's regimented way of life becomes disrupted. There are hints of a Pavlovian response in the title character – the boot-up sequence to his laptop has him "hard as a rock". Otherwise, Don Jon is simple and mechanical and perfectly enjoyable – like a good old missionary shag.

Gordon-Levitt sells it, of course, amplifying the hint of smugness that's part and parcel of his persona without ever making Jon as loathsome as he sounds on paper. He's totally convincing as a nightclub predator, but when he eases off the hair gel and wears clothing with more than one micron of bagginess towards the end of the movie, you forget that Joseph Gordon-Levitt isn't actually a knucklehead. Johansson is superb as his 'love' interest, maintaining a fine balance of sassiness and trashiness, while being hotter than the Sun. Tony Danza is an inspired choice as Jon's vest-wearing dad and the head of his 'bad sitcom' family, but Julianne Moore is Don Jon's trump card, giving the movie's final third a more conventional, albeit satisfying, conclusion. She's possibly the only character who isn't drawn as a caricature; a fully-realised woman of depth and shade. 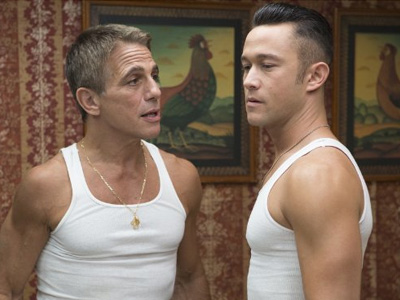 How many cocks can you see in this picture?


Though Don Jon succeeds in being funny at every turn – Gordon-Levitt singing Marky Mark is the new Alan Partridge singing Roachford – it is less successful in being a movie with something important to say. The opening credits, a montage of semi-pornographic music videos, commercials and yoga videos, suggest an astute breakdown of Hollywood's 'sex sells' philosophy is incoming, but Gordon-Levitt is happy to default to the not-so-startling revelation that making love can be just as fulfilling as fucking. The fact that the suffix '-s Addiction' was removed from the film's title makes perfect sense when you see how easily Jon is able to squash his vice. And that's before you realise that the entire plot hinges on the fact that a red-blooded male in 2013 has never heard of 'clear history'.

But let's call off the hounds. This is film #1 on Joseph Gordon-Levitt's sure-to-be considerable directorial CV, and though it is undoubtedly flawed, it is undeniably entertaining. How could you not love a lead character who charts his progress in life by how many Hail Marys he's punished with each week? It's unbelievable: even when he's playing a total tosser, Joseph Gordon-Levitt is still a total delight. The wanker.

More:  Don Jon  Joseph Gordon-Levitt  Scarlett Johansson  Julianne Moore  Tony Danza  Brie Larson  Sex
Follow us on Twitter @The_Shiznit for more fun features, film reviews and occasional commentary on what the best type of crisps are.
We are using Patreon to cover our hosting fees. So please consider chucking a few digital pennies our way by clicking on this link. Thanks!