There are a few questions that spring to mind when watching London Has Fallen, the first one being WHEN ARE THEY GOING TO BLOW UP BIG BEN? The second; is Gerard Butler the luckiest man in show business? And if I’m going to round this out with a third, does Morgan Freeman just have a stock set of scenes of him against a green screen that he flogs to studios? I swear I haven’t seen him interact with another live being for nearly two years now.

Only one of those questions above is answered, and it comes at roughly half an hour in, when London becomes collateral damage. Where Olympus Has Fallen was "Die Hard in the White House", the sequel is essentially the wet dream of Alan Partridge; it’s all "And move and fire and move and fire and – get back to the lift, Lynn!"

After the death of the UK Prime Minister, the leaders of the free world become sitting ducks for the world’s richest terrorist at the state funeral. What those pesky freedom-haters from Fakeanistan didn’t count on is Ass-Kicker-in-Chief Mike Banning (Butler) who’s not going to let anyone lay a finger on his best bud, POTUS Benjamin Asher (Aaron Eckhart). Luckily, Banning is built on "bourbon and poor choices" (actual line of dialogue), which is not only enough to power him and the President through London, but also to take control of an elite SAS unit after bumping into them on the street. 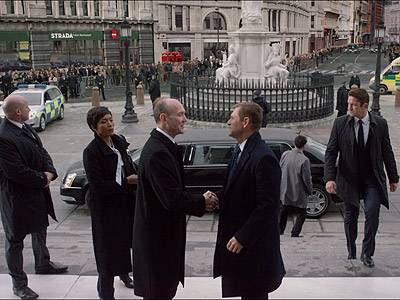 Just out of shot: A phonebox, a bus, a black cab and a bumbling bobby.


I’ve long been an admirer of Gerard Butler. Sorry, I mean baffled onlooker. He pops up in the most ridiculous movies – Gods of Egypt looks like a fever dream brought to life – and is an unmemorable presence in all of them. London Has Fallen is really no different, asking no more of him than to haul his beefcake across town and keep a straight face in light of lines such as “Go back to Fuckastani, or wherever it is you came from!”

Even less is asked of Morgan Freeman, who’s missing all the fun and waiting for his cheque to clear back in the US, as the now-Vice President Allan Trumbull. All he has to do is deliver the odd quavering "Oh my god" open-mouthed at a huge screen. If it wasn’t for him trying to grab a biscuit at this year’s Oscars, you wouldn’t be able to convince me that Morgan Freeman is now just Andy Serkis in a mo-cap suit, available to be spliced into any movie at the right price.

At least this time around, Antoine Fuqua's replacement, director Babak Najafi, spares us pensive shots of tattered American flags and Melissa Leo screaming the Pledge Of Allegiance as she’s kicked in the stomach. What we get instead is an entertaining 10-minute sequence of London landmarks being blown to shit, with foreign leaders conveniently placed on them. Wondering why the Italian PM and his lady friend were on the roof of Westminster Cathedral minutes before a funeral, or why the French guy preferred to hang out on a boat next to the Millennium Bridge is all part of the fun. No beloved landmark is spared: they even blow up Sotheby’s, the bastards. 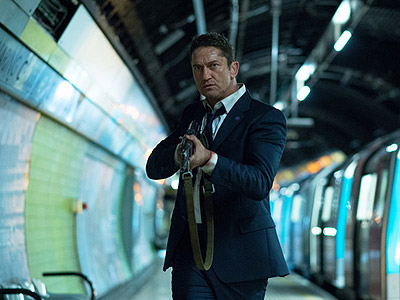 
When all the blowing up is over, the Prez is the last guy standing and there’s a mad dash to escape the clutches of the bad guys who want to execute him live on YouTube, and then get him to the chopper on time. Save for an inventive Call-Of-Duty-style storm through one of the seemingly many empty buildings around Soho, it’s all pretty much "move and fire" again. It’s all just dumb amusement amidst the wanton destruction - just don’t think too deeply.

Where there should be at least some sense of mild peril or grand spectacle, the SNES-level graphics are a tad shoddy and cheap-looking, which begs another question of what did they do with the $100m budget? Was it on a top-tier Morgan Freeman package, complete with the speech from Deep Impact? 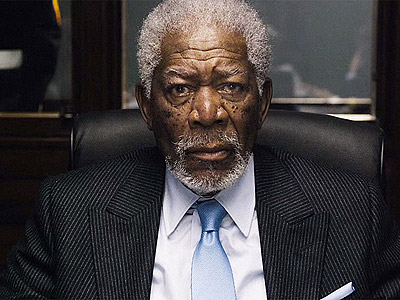 I honestly don't know which film this pic has been taken from, but it will clearly do.


You also have to forgive the odd liberty with London geography (you can’t turn that way on to Embankment!) and lack of detail: after such a devastating widespread attack, London tourists will still be apparently determined to continue with their shopping, because they won’t do what the terrorists want! As long as Whole Foods stands, London stands.

The saving grace is a mercifully short running time, which ensures the plot never has a moment to run out of steam - as predictable as it is - and the fact that LHF never really takes itself seriously. Amid the OTT action, there are some genuine moments of comedy, thanks in part to the (deliberately?) clunky script and hokey special effects. Don’t question why, just strap yourself in and feel the cheese.

More:  London Has Fallen  Olympus Has Fallen  Babak Najafi  Gerard Butler  Aaron Eckhart  Morgan Freeman
Follow us on Twitter @The_Shiznit for more fun features, film reviews and occasional commentary on what the best type of crisps are.
We are using Patreon to cover our hosting fees. So please consider chucking a few digital pennies our way by clicking on this link. Thanks!