"Hey girl, I made a surreal scary nonsense film because I’m a tortured, sensitive artist. Want to watch it with me? I think you’ll like it. It’s got loads of symbolism about, like, women and sex and monsters and theatre and street lighting. And there’s funny dancing in it. And lots of fake blood. And fire. And lots of bright colours. And a scene where Doctor Who cuts off someone’s lips with a pair of scissors. Want it see it, girl? Hey girl. Hey. HEY. Aww." (*Looks into the distance with sad, longing eyes while lifting up t-shirt to reveal chiselled abs*)


In assessing – or rather, trying to find – the merits in his directorial debut, it’s hard to separate Ryan Gosling: Perfect Specimen Of Manhood from Ryan Gosling: Try-hard Amateur Filmmaker, but the truth is that Lost River smacks of someone desperate to shed his popular, lovable hunk mantle for a title with more integrity and credibility. As such, it comes across like the college coursework of a film student trying to convince the girl of his dreams that he is 'deep' and that he 'gets stuff'; it’s the cinematic equivalent of carrying around a copy of Plato’s The Republic on your commute to work, sneering at anybody busying themselves with the Metro’s 60 Second Interview.

The good news is, it worked. Ryan Gosling has taken a step away from "popular, lovable hunk" with this film. The bad news is that he has taken a massive outstretched jump towards "cack-fisted fraud". 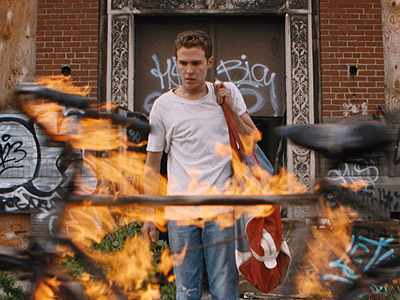 This runaway bike on fire is a metaphor... for the whole film.


Because it is immediately evident that Gosling has written and directed a film under the direct influence of recent collaborator Nicolas Winding Refn, and then thrown in some Lynch standards for good measure. In particular, Lost River owes a great debt to Only God Forgives, which was already a polarising film (for clarity’s sake, I loved it), with blinding neon lighting and woozy tonal shifts, all set to a pounding score. But it’s as though Ryan Gosling watched this last movie he made with Refn just once, and then set himself the challenge of trying to recreate it from memory years later, with no clear recollection about what made it work, and no real experience in handling a camera. "I remember there was some bright pink in there, and it was all slow motion and everything draaaaagged, so this is probably near exact."

Yet, on occasion, Lost River does show subtle glints of promise and potential in Gosling as a filmmaker. There’s a steady confidence in his frequent, over-stylised lingering shots that suggests a man capturing exactly what he wanted in every scene, rather than fumbling around with grown-up equipment that is beyond his comprehension. The larger problem, however, is that the intention itself is misplaced.

Gosling’s real failing is not as a director, but as a writer. What we have here is a muddied mess of erratic ramblings, a movie that contains a lot of individual surreal elements and has nothing to hold it all together apart from Gosling’s own blind faith that weird = clever. 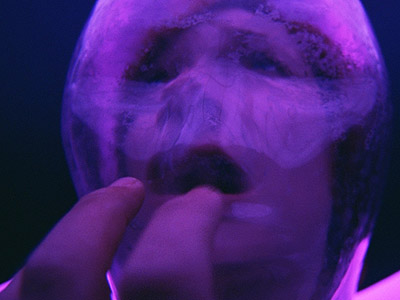 Ergo the smartest moment of the film.


Just look at the cast of characters. We have Iain De Caestecker’s Bones, a young man who steals copper from the house ruins of his derelict neighbourhood until he runs afoul of Matt Smith’s unpredictably violent Bully, the head thug who considers himself in charge of the area and who drives around sitting on an armchair strapped to a convertible showing off a gold-sequined jacket and a bare chest. Meanwhile, Christina Hendricks is Bones’ mother, Billy, who after falling short with her mortgage repayments, reluctantly agrees to take a job offered by sleazy bank manager Dave (Ben Mendelsohn), where she has to perform for braying men at a Theatre of the Macabre. And then there’s Saoirse Ronan who plays Rat, a girl who keeps a… er… rat, and who looks after her grandmother, a Miss Haversham-type recluse who does nothing but watch her old wedding video all day long in a mourning dress.

Aside from Bones and Billy, who are drawn with more purpose if not any actual characterisation, the cast is mostly made up of cartoonish types each with one clear, recognisable trait and no other discernible qualities. Take Matt Smith’s Bully, for example, a brutish, psychotic character who is actually one of the only interesting elements in the whole film, but that dubious triumph is all down to Smith’s performance. Bully never actually really says or does anything of note other than display a few instances of extreme violence. He, like every single person in this film, is woefully underwritten to the point of being a blank page that merely makes up some paper-thin storytelling. 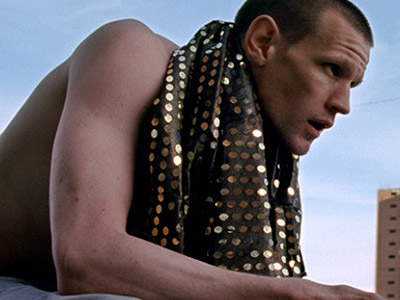 "What if I take the jacket off? Does that count as a character arc?"


The sad thing is, by the very nature of this kind of movie, Gosling was probably already expecting negative criticism. He’ll probably just think "Haters gonna hate" while eagerly awaiting Nicolas Winding Refn’s new movie so that he can start planning his own next one. And, worse still, he has probably already elevated himself to the title of ‘misunderstood genius’ and will use the bad reviews to fuel his passion for making another misjudged film. After all, auteurs gonna aute, right?

More:  Lost River  Ryan Gosling  Iain De Caestecker  Christina Hendricks  Matt Smith
Follow us on Twitter @The_Shiznit for more fun features, film reviews and occasional commentary on what the best type of crisps are.
We are using Patreon to cover our hosting fees. So please consider chucking a few digital pennies our way by clicking on this link. Thanks!