Ooooh, Luther's back. And this time, he's mad. Actually, he's not that mad. I'd been led to believe he would be by that trailer where he smashes up the office backwards. Right, I'm calling Points of View. Is that still on?

I watched the first episode or two of Luther last year, and thought it was just about diverting enough. Cop is married to the job: check. Wife's left cop: check. Murderer becomes obsessed with cop, enjoys setting puzzles for him, they grow to respect one another as adversaries: checkity checkity check.

It's pretty standard stuff in terms of storyline. What elevates it, though, is Idris Elba. Whether or not the show was written as a vehicle for him I've no idea, but you'd imagine so: there's not much point to it otherwise. 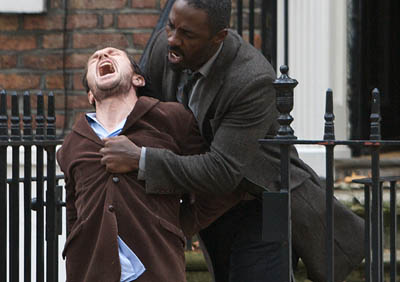 Luther: get shirty with him and he'll proper rough you up and no mistake. Guv.

Now, I missed the end of the last season, but apparently his ex-wife got murdered or something, and as we rejoin him he's getting back on the force after a sabbatical. Plunged straight back into a case where a guy in a Punch mask is doing some bad murders and taunting the police about it, Luther gets back on the job with gusto, while also tracking down a friend's daughter who's now a prostitute.

I don't quite buy the speed with which he's got back into the swing of things though. I'd kind of thought Luther was going to be a massive loose cannon and be all nuts and stuff, but he seems fairly lucid in general. Then again, he seems to play Russian roulette every morning while having his Frosties, so it's a mixed message really. By way of illustration I've devised the following Luther Mentalometer to track his mentalism. 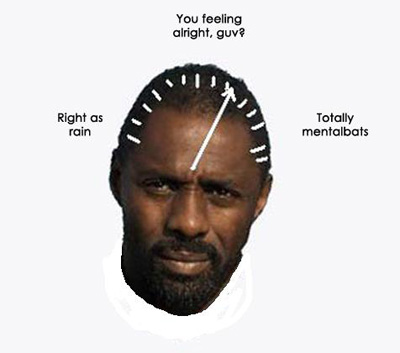 According to the Royal College of Psychiatrists I "need to refine the parameters a bit".

But the thing about this masked murderer is, he's like every other police-taunting killer there's ever been in anything. He's a lone nut with a manifesto, obviously, which might have been written by Tyler Durden, or the guy with the van in Source Code, ie: "We live in a decadent age! Mass consumerism! The people of London are asleep! I want to wake them up! By, er, killing them! Yeah!"

But couldn't you just run for the London Assembly or something? No? Sticking with the murdering instead? Right you are then.

It is, then, all a bit daft and cliché-ridden, but darn it, you can't take your eyes off Idris. He shows himself in close-ups to be a pretty damn remarkable actor, throwing a million and one little facial reactions into the mix while the other person in the two-shot's talking, where a lot of actors would just sit and wait for their next line. He's got a Christopher-Walkenesque way of delivering otherwise unremarkable dialogue as if there were five commas in the sentence that no one else had noticed. And he wheels out all these little flourishes, like his preposterous swaggering walk (though that might just be his own walk), and a bit where he spins a full circle in a swivel chair for no reason and visibly takes the other actor by surprise.

This is by far the best thing about Luther. It gives Elba the chance to show off some range he never could in The Wire (where the character meant his performance was understated) or in Thor (where, let's face it, he was playing a god who guarded a big magic portal thing into another dimension).

Ha! I tell you what: if he wasn't in it, I'd probably just GIVE IT THE ELBA.

Oh right, like you didn't know that was coming.

More:  Luther  Idris Elba  BBC  The Wire
Follow us on Twitter @The_Shiznit for more fun features, film reviews and occasional commentary on what the best type of crisps are.
We are using Patreon to cover our hosting fees. So please consider chucking a few digital pennies our way by clicking on this link. Thanks!