Machine Gun Preacher: with a title like that, you'd expect a Grindhouse-esque, ultra-violent B-movie about a muscle-bound preacher with ripped sleeves, standing atop a pile of bodies, brandishing a huge gun, maybe with a cigar hanging out of his mouth, topped off with a killer catchphrase. "Pray for mercy," he'd say. Or something like that. 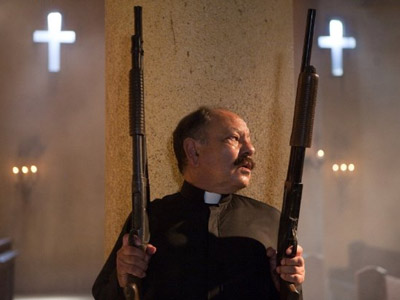 
Oh, how wrong we are. Instead, Machine Gun Preacher - directed by Marc Forster - is the true story of Sam Childers, a former drug-dealing gang biker turned God botherer who dedicated his life to helping the people of war-torn Southern Sudan (or, as Butler pronounces it, 'Soo-dane') by building houses and churches, rescuing orphaned children, shooting bad guys and generally being a Good Samaritan. This is the most blatant case of false advertising I've seen since The Neverending Story.

It almost seems too clichéd a story to be true. A tale custom made for the big screen - bad guy comes good, finds God, helps those less fortunate, learns life lessons. Gerard Butler puts in a passionate performance as Childers, possibly the best of his career, but it's a shame it's all too rushed and emotionally detached.

In no time at all, Sam goes from a drug-abusing, trailer trash hellraiser to Jesus's BFF, with his drastic change of heart never fully explained. All of a sudden he has his own building company, replaces the family trailer with a big house, starts wearing shirts, gets a haircut, reads bedtime stories, erects a church in his hometown and tells his family he wants to help people in Africa. Quick as a flash, he's lugging a wheelbarrow about in Uganda while the audience are still piecing everything together. This all happens in the space of twenty minutes or so. 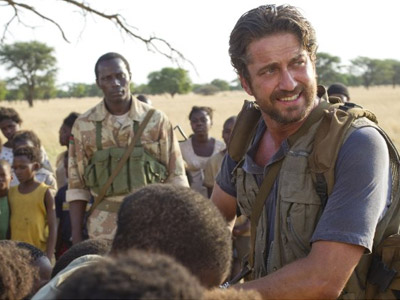 "Comic Relief, huh? I fail to see what's so funny about famine."


This fast-paced story-telling - with the film split between America and Africa - unsurprisingly leaves questions being asked and characters left under-developed. A decent Michelle Monaghan as Sam's wife Lynn becomes little more than a concerned missus on the end of the phone, while Sam's best friend Donnie (Michael Shannon) is a fascinating character who goes through a similar transformation to Sam, but is criminally underused. All credit to Butler, though, who confidently tackles his most challenging role with ease and confidence. Let's hope this puts an end to all those romcoms.

Sadly, once the action moves to Africa (with the odd trip home to shout at his congregation), it becomes an unbalanced mix of heartfelt inspiration and gun-ho, shoot 'em up violence as all sorts of moral questions about right and wrong are bandied about. Is he a humanitarian or a mercenary? Childers starts hunting rebel soldiers like an African Rambo, but it's cool because the big guy upstairs has got his back.

Ultimately, Sam Childers' life is too complex a story to fully appreciate in a two-hour film. With the need to cram everything in, we're left with plot holes big enough to hide a cache of orphans in, while interesting points, like his struggle to essentially live a double life, are swiftly dealt with. Marc Forster has all the right intentions but fails to capture the film's true depth. As it is, we're left with a story that perhaps would've worked better as a TV miniseries.

More:  Gerard Butler  Marc Forster  Michelle Monaghan  Michael Shannon  Machine Gun Preacher
Follow us on Twitter @The_Shiznit for more fun features, film reviews and occasional commentary on what the best type of crisps are.
We are using Patreon to cover our hosting fees. So please consider chucking a few digital pennies our way by clicking on this link. Thanks!