Getting over your first love can be tricky. When your heart has been torn from your chest and ripped to pieces in front of you by the cruel hand of fate (or by your childhood sweetheart), it's easy to believe that true love only exists in fairytales, particularly when you're standing outside their house at 2am, barefoot and screaming "WHHHHYYYY?!" Agony aunts will often offer up cheery advice such as "Take up a new hobby!" or "Try a daring new haircut!" My advice after watching Maleficent would be to get a set of leather horns, some red lipstick and go all 'bad witch' on his ass. Revenge has never looked so good.


Coming hot on the heels of the success of Frozen, Maleficent marks Disney's revival of the princess movie but for a modern feminist (and that includes the boys) audience. The House of Mouse has learned plenty from Pixar's special move of subverting traditional perceptions of good and evil, mixing it with the love of a good origins story (à la Marvel) and with an added dash of wry humour that works for kids and grown ups alike. Comparisons to other similar fairytale 'reboots' will be inevitable, but this fairy queen would probably twist off Oz The Great and Powerful's balls with her beautifully painted talons and impale Snow White and her Huntsman on those big pointy horns. This may be a Disney production, but there are no cheesy sing-a-longs or cute snowman sidekicks. There are all kinds of battles and dragons and shit, and the 3D is so sumptuous Angelina Jolie's cheekbones threaten to cut through the screen at any moment.

The actual Sleeping Beauty "reboot" comes mid-way through, after we've all swooned and aaaahed over Maleficent's magnificent wings. She swoops and soars through the magical forest she guards from those pesky humans, occasionally stopping to chat with some pretty freaky looking woodland creatures. It's Disney, but not quite as we know it. When an invading human army threatens the harmony of the land, Maleficent stands strong as its fearsome protector, leading to an epic battle of man vs forest. 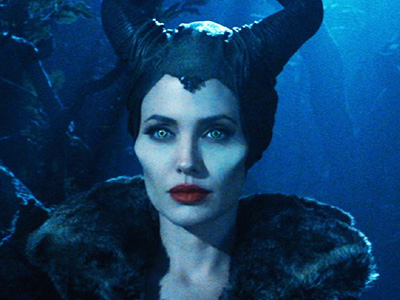 
After the humans beat a hasty retreat at her bellowing, Maleficent is revisited by her childhood sweetheart Stefan (Sharlto Copley channelling Shrek), but is ultimately betrayed when Stefan brutally cuts off her wings to impress his king. Understandably, this pisses Maleficent off and so her rise to infamy begins.

Ignoring all advice from Cosmo and the like, Maleficent forgoes a new hairdo and instead creates a thorny fortress of solitude to mourn the loss of her wings and smash her A-Team Blu-ray into smithereens. Jolie obviously revels in darker roles and the evil fairy is no exception: as Maleficent's heart grows darker, so too does the world around her as she slinks and stalks through the forest, basking in the sorrow that surrounds her. Time passes, Stefan eventually becomes king and has a daughter, but is still fearful that one day Maleficent will have her revenge. Upon hearing that she's not been invited to baby Aurora's christening, Maleficent does what any self-righteous gal does – puts on her best frock, polishes up her horns and goes anyway.

Her entrance is stunning; with her iconic silhouette slithering across the walls in a nice call back to the original film – the high collars! The horns! The green fire! Knowing the back-story between Maleficent and the king gives a new depth to her reasons for cursing the infant Aurora, and frankly, Stefan gets off lightly. He betrays her, and yet apparently if you show up uninvited to your ex's party and place an irrevocable curse on his daughter, then suddenly you're the bad guy. I can SO relate to Maleficent. 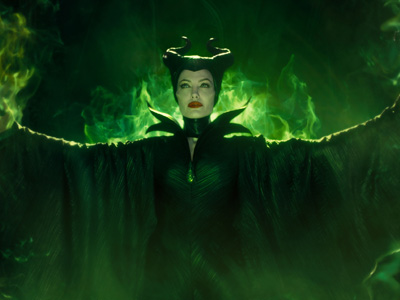 
The middle third of the film deals with Maleficent watching Aurora grow up and she displays a line in wit as sharp as her talons. Her scorn of the infant is laugh out loud hilarious, particularly a cute scene where she is accosted by what looks like a mini Brad Pitt (Jolie famously cast her daughter Vivienne as a young Aurora after finding other children were too scared to approach her in costume). Jolie really comes into her own, not having to deal with the weight of her CGI wings and it's hard to carry on from this point without it being an out and out love letter to La Jolie, but she really is fantastic. As well as being beautiful to the point of absurdity, she acts everyone else off the screen, able to convey years of sadness with just the flicker of an eyelid and the right degree of menace with an upturned ruby lip.

It would be unfair to say that this is the Jolie show: Elle Fanning manages to keep the teenage Aurora on the right side of annoying; her enthusiasm is actually catching rather than grating and it's not long before she's winning Maleficent over and taking her out for walks in the forest to pet the various woodland creatures. Theirs is the most important and emotional relationship in the film and a brief introduction to Prince Phillip (Benton Thwaites) as Aurora's first crush is merely a plot device to serve the twist in the finale: this time the girls are doing it for themselves. Meanwhile, Sharlto Copley's facial hair becomes increasingly unruly as King Stefan becomes more and more insane, waiting for the day Maleficent will rock up again. That she manages to instil fear without actually doing much is incredible: her subjects and the humans fear her, but only because of what she may do.

We've had tragic origin stories for villains before, but Maleficent pisses green fire all over Darth Vader's 'sad kid becomes petulant teenager' story by managing to fit in a well-rounded and plausible back story in one eighth of the time it took George Lucas. It's not just the classic tale from a different perspective, but elegantly manages to deal with issues of loss, betrayal, the consequences of acting in anger and the fact that good people can do bad things. There's a little bit of Maleficent in all of us (if only I had her horns. I will freely admit I have the horn for Maleficent's horns). 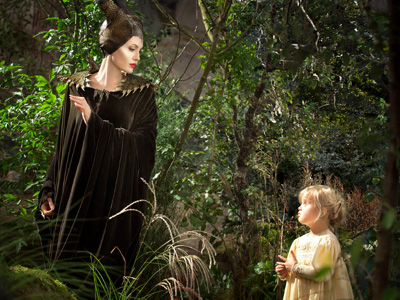 Angelina: [looks at child] [looks around] "I'm adopting that."


It's not completely without it's niggles: the war between the humans and the fairies is largely nonsensical, and there could have been a bit more explanation as to why the spinning wheel is important to the curse, other than the fact there was one in Maleficent's eyeline, but Jolie is so astonishing and the story is so tightly packed into 97 minutes that these can be overlooked.

The best piece of advice on getting over a break up is ultimately to just get through it, but I prefer Maleficent's scorched earth policy, mainly because she looks so scorching while doing it. A broken heart can lead you to do things we'd all rather forget, but Maleficent teaches us that we're all fallible and there's always a chance for redemption. Finally, here is a Disney princess I can really relate to – one that's as ease with sewing prawns into an ex's curtains as they are cavorting with talking animals in the woods. Now excuse me whilst I elbow some tweenagers out of the way at the Disney store for those horns.

More:  Maleficent  Robert Stromberg  Angelina Jolie  Elle Fanning  Disney  Sharlto Copley  Sam Riley
Follow us on Twitter @The_Shiznit for more fun features, film reviews and occasional commentary on what the best type of crisps are.
We are using Patreon to cover our hosting fees. So please consider chucking a few digital pennies our way by clicking on this link. Thanks!