Man On A Ledge

Go into this cold turkey and you could be forgiven for thinking Man On A Ledge is a contemporary commentary on the current state of the economy. Let's look at the evidence, shall we? It's set in New York, there are mentions of "this economy" followed by tutting, Ed Harris wears a sharp suit and smokes cigars like a boss (lit with $100 bills I hope ) and, oh, there's a bloke perched on a ledge threatening to throw himself off.


But no, this isn't the case at all. Any hint of a social commentary about the financial crisis jumps straight off the roof around the time we see Jamie Bell's rubbish little beard and his girlfriend's ample cleavage and matching purple underwear. This ain't no Margin Call.

Instead, we have a gripping, well-written, fast-paced heist thriller with a twist. While fugitive Nick Cassidy (a mumbling Sam Worthington) stands perilously on the ledge of a high-rise New York hotel, claiming his innocence while gaining the attention of the entire city, his brother Joey (a film-stealing Jamie Bell) and his full-chested missus are quietly breaking into a diamond exchange across the street in a bid to prove Nick was set up by big dog on the block, David Englander (a delightfully devilish Ed Harris, giving precisely zero fucks). 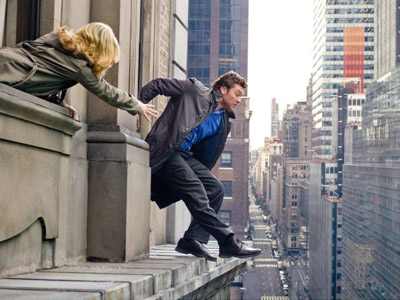 They both agreed: their game of tag had got WAY out of hand.


With the help of a handy flashback, we discover Nick is an ex-cop serving a 25-year sentence for stealing a $40 million diamond, which, of course, he denies. After being given leave for a funeral, he makes a run for it and eventually ends up on the ledge of the hotel.

Director Asger Leth does a bang-up job keeping everything chugging along at a steady pace. Elements of Phone Booth and Ocean's Eleven are thrown together to great effect and he takes his time revealing the intricacies of the story. What begins as a fairly simple premise explodes into a web of double-bluffs and unpredictable plot twists, and everything clicks nicely into place. Up until then we're as confused as the onlookers as to what the hell's going on, and with Leth flipping between Nick on the ledge and Joey going about his heist, we're never in one place long enough to get bored. 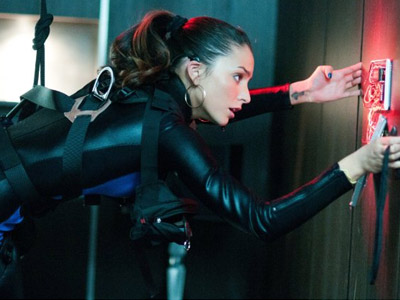 If necessary, N-Dubz would BREAK INTO THE CHARTS.


Leth and screenwriter Pablo Fenjves (also OJ Simpson's ghost writer) spend little time on back stories as insightful titbits become apparent throughout, which works well to some extent. Elizabeth Banks' negotiator, for example, is still haunted from unsuccessfully talking someone off a bridge. Not a particularly necessary point, but it makes her more human, rounded and sympathetic. On the flipside, Sam Worthington being an ex-cop serves little purpose other than to give his ex-partner Anthony Mackie something to do.

What ultimately knocks Man off his proverbial Ledge are the untied loose ends, unanswered questions and gaping plot holes left behind come the unnecessarily jolly credits. Not only does the ending feel completely out-of-place and tacked on, but the script gets careless with the complex details that made the previous 90 minutes such a tense, edge-of-the-seat thrill.

More:  Man On A Ledge  Sam Worthington  Elizabeth Banks  Ed Harris  Asger Leth
Follow us on Twitter @The_Shiznit for more fun features, film reviews and occasional commentary on what the best type of crisps are.
We are using Patreon to cover our hosting fees. So please consider chucking a few digital pennies our way by clicking on this link. Thanks!