I have been trying to write a movie script for a few years now. Of course, I am under no illusion that it will be any good but, like all aspiring screenwriters I am hoping for two impossible things to happen: 1) it will be lauded as a magnificent piece of art, and 2) it will actually get made into a film. What Mike And Dave Need Wedding Dates shows, however, is that if you care less about 1), there are some quick and easy ways to make 2) happen.


Because I'm pretty certain that if you write a half-baked screenplay that's set in Hawaii, whole swathes of talented, vacation-hungry actors will be fighting to sign up for the film... and then hopefully they can be relied upon to do all the heavy lifting. This is 'Hollywood holiday' filmmaking and is practically its own genre - incredible beaches filled with tropical trees where the main characters get into semi-funny scenarios whilst trying to relax with spa days and yoga. The palm-com? The om-com? Either way, you get the idea: this film is the new Couples Retreat.

Just like Vince Vaughn and Jon Favreau's "screensaver" comedy, here we have four brilliant and extremely funny actors: Zac Efron is still obviously a huge talent despite making questionable career choices, Adam Devine is undoubtedly a hilarious guy and expert improviser even if his default mode for both energy and audience sympathy tends to be 'full throttle', Aubrey Plaza is easily one of the funniest young actresses working at the moment despite never having any material that matches her work on Parks And Rec, and Anna Kendrick... well, she's practically a comedy angel.

Together, in this movie, they are a great cast but only creating occasionally funny moments because all they can do is make the best of the flimsy script they have. And the one problem that none of them can compensate for is that all of their characters are utterly obnoxious and unlikeable. 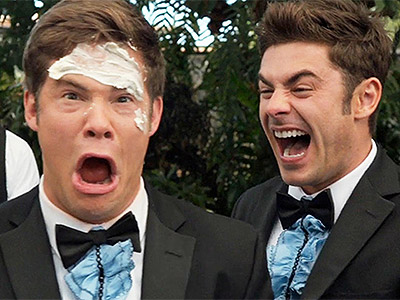 
Zac and Adam (Mike and Dave, although I forget in which order) are two party animal idiots who have made a promise to bring two respectable dates to their beloved sister's Hawaiian wedding and behave themselves. Their Craigslist ad goes viral (based on a true story of real-life terrible people apparently) and catches the attention of Aubrey and Anna's Tatiana and Alice, who are somehow even worse people than they are, but pretending to be someone they're not for the sake of a free holiday. Who knows how Plaza and Kendrick found their inspiration for these roles.

So the film becomes a series of mishaps in which Tatiana and Alice try to cover up their true intentions, and in this way the film presents a refreshing proposition. Honestly, I hope there will come a time soon when we can discuss female characters without feeling the need to talk about whether or not they present a feminist agenda, but it does feel pertinent to mention here that this film’s set-up proposes an interesting twist: subverting the male-centric title to have the female characters act as the real protagonists.

It sounds like an empowering notion, and had Tatiana and Alice been written as smart girls showing the guys the error of their douchebag ways, then this could have been the case. But instead the girls just turn out to be even douchebaggier, and Mike and Dave come across merely as victims of their scheming despite being awful assholes to begin with. So sadly, no, Mike And Dave Need Wedding Dates isn’t the film that will restore equilibrium to cinema’s gender imbalance and snuff out sexism in Hollywood. God, it’s like no one here is even trying. 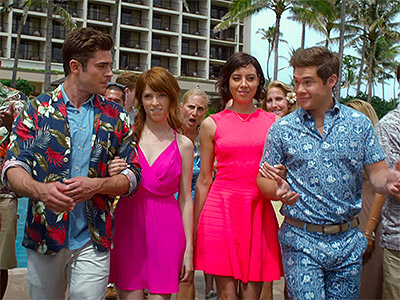 Adam Devine's outfit is the hardest working thing in this whole film.


But then, why should they? Everyone’s in Hawaii and they’re having a good time, and that actually is something that comes through here. Lazy script and missed opportunities aside, the stunning sight of luxurious beaches and glorious sunshine can always make for welcome viewing and a positive disposition. Which is why I’m taking a cue from this movie and rewriting my own script so that the story– about a woman in the 1930s embarking on a journey of sexual awakening in the face of rising Nazi totalitarianism that ultimately leads to a psychological investigation into mankind’s reliance on existential dilemma – is now set in Ibiza.

More:  Mike And Dave Need Wedding Dates  Jake Szymanski  Zac Efron  Adam Devine  Anna Kendrick  Aubrey Plaza
Follow us on Twitter @The_Shiznit for more fun features, film reviews and occasional commentary on what the best type of crisps are.
We are using Patreon to cover our hosting fees. So please consider chucking a few digital pennies our way by clicking on this link. Thanks!