You have to feel for anyone brave enough to release a political movie in this day and age, where even the 24-hour news cycle feels insufficient enough to get a handle on current events. Miss Sloane, from Brit director John Madden, is not explicitly about U.S. government per se - there are two ideologically opposing political parties though neither are named - but it is impossible to watch without viewing it through the lens of post-truth politics. Slick as it is, Miss Sloane is about a huckster lobbyist who can lie, cheat and talk her way out of anything - and she's the hero! However, if you can tune out the Kellyanne Conway-isms and mentally frame it as a romanticised throwback to political potboilers of old, when corruption was something that happened in underground car parks and not in broad daylight, then there's lots to enjoy.


Jessica Chastain is Elizabeth Sloane, a powerful Washington lobbyist - known in regular circles as a bullshitter - who could convince eskimos to invest in snow. When she's asked to help make a new gun legislation appeal to female voters, Sloane does an about turn and joins Rodolfo Schmidt (Mark Strong, though with a name like that the character could easily be a Muppet) to bury the bill once and for all. You know the genre, you know the drill: all characters talk with the kind of instant witty repartee that's delivered faster than the human brain could possibly comprehend, every second wall is made of glass and the only things sharper than the dialogue are the suits. Think a female Michael Clayton. It's Michelle Clayton. 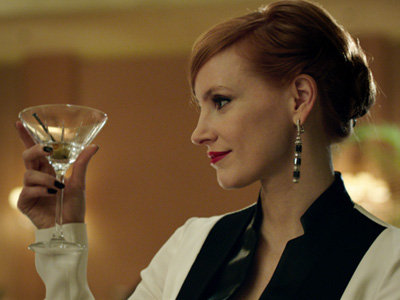 Cheers to another great gag.


Chastain gets great mileage out of a complex and interesting character: on the surface she's an ice sculpture that can't be thawed, but when you do see a chink in her armour, there's lots going on behind the facade. It'll take you about three minutes to make a Julia Roberts connection, not just because of the distinct Brockovich vibe in the room but because Chastain seems to be channelling her directly - even the honking laugh and subsequent hand over the mouth is right out of the J-Rob playbook. Also Chastain appears to have borrowed her wig from Mother's Day. At any rate, she's a spellbinding actress to watch in full flow and she wears the role - and some incredible coats - well.

The supporting cast only really exist to orbit Chastain, who runs the show and dominates the screen. There's a great moment where Sloane and Schmidt's team are working late, and when boss Schmidt says they can go home, they all glance at Sloane for permission. Nice touches like that make the relationships between the characters ring true, but Sloane is written as such a manipulative genius, her supernatural foresight means she's always eight steps ahead of everyone, which does tend to push the movie into fantasy territory. She's a bit like Jigsaw in the Saw movies, accurately predicting future events she has no business ever knowing about. What the movie needs is moments that puncture that pomposity, like in 30 Rock when Jack Donaghy starts addressing a just-arrived Liz Lemon with his back turned, before admitting he'd already done that to like four other people before she got there. 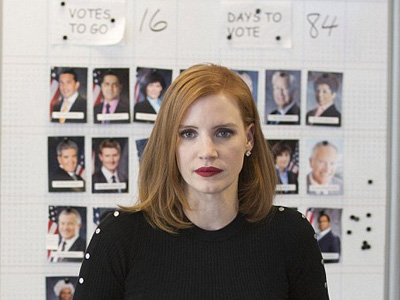 A woman in politics? Triggered much, liberal snowflakes? etc etc


It'd be unfair to call Miss Sloane a missed opportunity given the volatile political climate it has unwittingly found itself in, but it doesn't quite deliver that hit you're looking for. Maybe if America was currently serving under President Hillary Clinton it'd feel different, but that's too depressing to consider. What Miss Sloane does, it does well - walking the walk, talking the walk and talk, turning the screw, screwing the pooch etc - but when the most memorable thing about it is one of Jessica Chastain's black PVC jackets, clearly nicked off the set of a 1990s Janet Jackson music video, it's clear it's not going to be regarded as a classic.

More:  Miss Sloane  John Madden  Jessica Chastain  Mark Strong  Gugu Mbatha-Raw  Alison Pill  John Lithgow  Jake Lacy  Coats
Follow us on Twitter @The_Shiznit for more fun features, film reviews and occasional commentary on what the best type of crisps are.
We are using Patreon to cover our hosting fees. So please consider chucking a few digital pennies our way by clicking on this link. Thanks!