How many straight-up action movies have you seen this year? Remove all the superhero movies, alien invasions and Jason Statham films (which, as we all know, don't play by conventional rules), and there have been precious few pulse-pounders that were rooted in reality. Being grounded is not something typically associated with Tom Cruise – indeed, in Mission: Impossible - Ghost Protocol he comes closer than ever to his Space God, courtesy of the Burj Khalifa – but the return of Ethan Hunt and his IMF team should be welcomed in a year where far-out fantasy and outlandish action has so far reigned.


Let's cut to the chase: Mission: Impossible - Ghost Protocol doesn't quite trump JJ Abrams' third instalment as best of the series, but it is far pacier than Brian De Palma's stuffy franchise opener and is approximately half as ridiculous as John Woo's misguided sequel. Here's an infographic that basically visualises everything I just said. 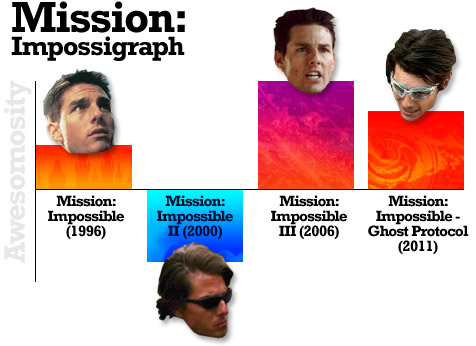 Cruise is on irrepressible form as usual, throwing himself into his stunt work with near suicidal gusto and welcoming his character's new shades of darkness. He's the linchpin of the entire movie and takes every action beat in his stride – always moving, thinking and running, running, running. The only thing he's not entirely comfortable with is levity: as hard as it is considering the rollercoaster that is his personal life, Cruise is a man who's more tolerable when taken seriously.

As big a star as Tom Cruise is – and he wants you to know it, listing the film as 'A Tom Cruise Production, starring Tom Cruise' in the opening credits – this is really Brad Bird's show. Making his live-action debut, Bird brings all the energy he's accumulated from animated movies like The Incredibles and Ratatouille, resulting in a movie that's turbo-charged and barely leaves time to breathe.

At its best, Ghost Protocol is tense, daring, funny, inventive, visually coherent and unpredictable; the middle section, situated on, above and hanging out the windows of the tallest building in the world, is a five-star experience and represents everything you want from an action film. It rivals any other scene this year in terms of sweaty palms. It'll send you dizzy with vertigo. 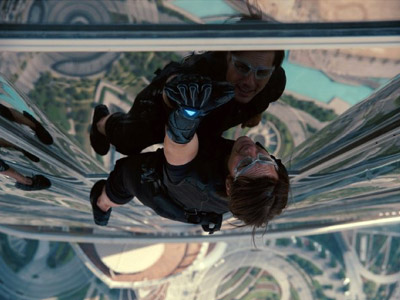 Don't try this at home. This man may very well be mentally ill.


Plotting elsewhere is pretty concise, if a little underwhelming when compared to the inherent mystery of the 'Rabbit's Foot' macguffin of M:I-3. The movie hangs off the hook of the threat of nuclear war, which a) you never really feel is a possible outcome in a movie like this, and b) is a little overdone when it comes to 'mad plots to destroy the world'.

Villainy is another area where Ghost Protocol is lacking: Michael Nyqvist's bad guy Curt Hendricks is an identikit antagonist, whose motives aren't particularly clear, nor is he even particularly charismatic. He and Ethan Hunt don't share one exchange of dialogue through the whole film – in contrast to the incendiary opening scene of M:I-3, in which Philip Seymour Hoffman is established as an evil bastard of the highest order in 10 tense seconds, Ghost Protocol is severely lacking when it comes to a decent foil for its star.

No qualms about the good guys, though. Jeremy Renner stakes his claim as a semi-permanent member of IMF with a tongue-in-cheek turn as analyst-turned-ass-kicker Brandt, although there's no sign of Cruise handing him his baton (so to speak) as was previously reported. Simon Pegg falls just the right side of comic relief as jittery tech specialist Benji, while Josh Holloway works wonders with a small role. 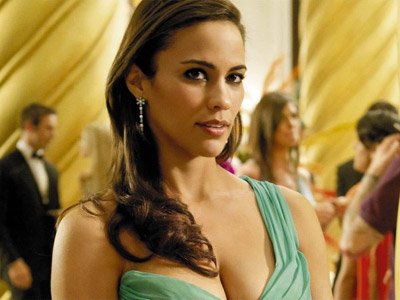 
An undoubtedly glamorous movie though it is, Ghost Protocol is having so much fun with itself, it almost doesn't want to end – the final action sequence, a multi-level snatch-and-grab that feels like Bird storyboarded it back at Pixar, is perhaps a lung-buster too far. That's not say it outstays its welcome, though; this Mission: Impossible is the kind of lean, mean, fearless action movie that chugs along at such a high tempo, you realise when leaving the cinema that you're actually running.

More:  Mission Impossible Ghost Protocol  Mission Impossible  Tom Cruise  Simon Pegg  Brad Bird  Jeremy Renner
Follow us on Twitter @The_Shiznit for more fun features, film reviews and occasional commentary on what the best type of crisps are.
We are using Patreon to cover our hosting fees. So please consider chucking a few digital pennies our way by clicking on this link. Thanks!