IN SPITE OF HIS RAGE, HE IS STILL JUST NICOLAS CAGE

"They fuck you up, your Mum and Dad. They may not mean to, but they do." Philip Larkin couldn’t possibly have known his ode to parenthood would inspire a Nicolas Cage movie that scores full marks on the gurn-o-meter, but then Philip Larkin didn’t see Ghost Rider: Spirit of Vengeance coming, either. Brought to you by Brian Taylor, one half of the ADD-addled braintrust behind Crank and its sequel, horror thriller Mom & Dad is another high voltage romp that burns energy like it’s jacked into the mains with no intention of paying the bill.


Here’s your killer concept: parents across America, apropos of nothing other than some odd TV static, decide that today will be the day they’ll kill their offspring. It’s a self-contained, Romero-esque conceit (guys: “Dawn of the Dad”, am I right? Up top!) that’s perfectly suited to American suburbia, where the smoothie sipping, mid-life crisising adults are just as directionless and miserable as the kids. Sure, the parenthood metaphors are heavy handed, but given the malice with which meat tenderisers are swung in this movie, a light touch just wouldn’t have got the job done. Horror movies rarely touch the taboo of killing kids - Mom & Dad takes great pleasure in scything down their own ungrateful spawn.

Nic Cage and Selma Blair are the malfunctioning parental units, both turned bug-eyed with infanticidal rage and both clearly having the most fun they’ve had in years. Much like The Purge, another movie with big ideas but without the budget to back them up, Mom & Dad starts broad - the first outbreak scene on the school yard is a savage affair, offset by some funky bossa nova beats - but gradually retreats within its means until we’re holed up with the kids in the boring old basement. 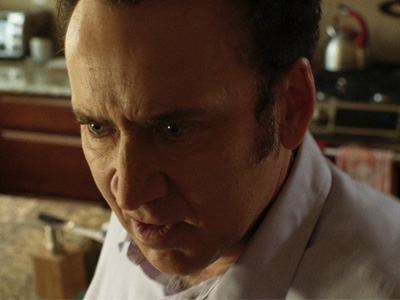 No need to be so cagey.


What the movie loses in urgency and scope it gains in humour; Cage and Blair are wonderfully macabre as they bitch and moan about the best ways to execute their children in the same tone they’d use to discuss cooking a ham. There’s a particularly great gag about Cage’s family man investing in a handgun ("What if some psycho breaks into the house?"). Time spent with Nicolas Cage hellbent on murdering *anyone* is never time wasted; the fact he also finds time to go at a pool table with a sledgehammer like a Street Fighter II bonus stage is the icing on the Cage.

In truth, aside from an unsettling premise and a few genuinely grim grace notes (a shot of a gaggle of fathers staring blankly through the window of a maternity unit will stay with me for a while), Mom & Dad still feels like it’s holding back a little. There’s not much on the gore front that you haven’t seen before, and save for a fun but predictable twist in the last act, it steadily runs out of steam until it stops dead. Movies that burn through this much bluster usually struggle to sustain interest for the entire running time, but at least Mom & Dad is just practicing what it preaches: at 83 minutes long, it dies before it gets old.

More:  Mom And Dad  Brian Taylor  Nicolas Cage  Selma Blair  Horror
Follow us on Twitter @The_Shiznit for more fun features, film reviews and occasional commentary on what the best type of crisps are.
We are using Patreon to cover our hosting fees. So please consider chucking a few digital pennies our way by clicking on this link. Thanks!