I've had nightmares like mother!, proper sweat-drenched, bolt-upright air-gaspers that have left me shaken for hours. The ones where ordinary, mundane events turn hellish in an instant. The ones where your loved ones are there too but they're in on the bad juju, their blank faces betraying the feverish insanity you feel. Mother!, the new movie from Darren Aronofsky, is the closest a film has ever come to replicating one of those bad dreams; how quickly the drip-drip-drip of reason gushes into madness, how helpless we are in the face of our own demons and how it's always the ones we love that hurt us most. That exclamation mark in the title does not signify a comedy - it's the kind you see shortly before you plummet off a cliff.


Oscillating wildly between haunted house horror and Fawlty Towers farce, mother! is a film that defies categorisation. On the face of it, you have Jennifer Lawrence playing the young muse of her poet husband Javier Bardem, busying herself by fixing up their creaky country home while her partner fails to plaster over the cracks of his writer's block. The troubles start with a knock at the door: Ed Harris's unexpected visitor soon overstays his welcome, bringing all kinds of unwanted attention to the doorstep, but it becomes clear there's already something rotten in the house's foundations. 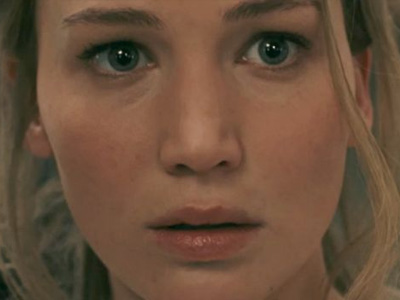 It's a bit like The Money Pit but with more existential dread.


Mother! is equal parts home invasion thriller and fraught relationship drama, teasing and inviting horror tropes like houseguests and placing the resulting strain squarely on Lawrence's shoulders. Aronofsky keeps his viewfinder trained intimately and uncomfortably on his lead actress; with the tight focus on her youthful face (it's worth pointing out she's still, somehow, only 27 years old), Lawrence wears the camera like a millstone around her neck. Framed as a meek audience surrogate, reacting to the intensifying madness as anyone would, hers is an insular but deeply affecting performance that will speak loudly to anyone who lives their life through the lens of anxiety.

Aronofsky purposefully keeps the screenplay sparse, dialling back the dialogue to let uncomfortable silences do the talking; the complete vacuum of a score echoes loudly throughout the house's empty rooms. For a brief moment, when Michelle Pfeiffer's brazen hussy enters the house and proceeds to get sozzled on alcopops, mother! threatens to become an arthouse odd couple comedy, but there's always an undercurrent of discomfort bubbling beneath the surface - and it's not long before it erupts spectacularly, like an episode of Grand Designs pitched on the edge of the Seventh Circle of Hell. 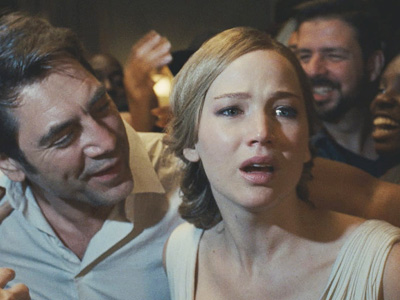 When bae swaps your Spotify playlist for his


Mother! can be read in many different ways - as a comment on the cycle of abuse, as a Bible allegory, an ode to the perils of motherhood, as a warning to anyone planning an open-invite house party - but whichever way you stomach it, it is quite simply one of the most relentlessly intense, gut-churning portrayals of escalating madness ever captured on screen. Lawrence, fragile and porcelain, has never felt more vulnerable, while the grinning face of Javier Bardem - who has the profile of an Easter Island statue wrapped in ham - is more frightening here in his placidity than he ever was as an out-and-out villain.

Mother! is not a film to which you will have a middling reaction: you may be deeply shocked, you may be appalled, you will more than likely have a hot take but you won't be bored. Aronofsky has captured something primal here; some deep-seated, three-inceptions-deep, subconscious level scary shit that you didn't even know was festering down there. I kept thinking back to that familiar dream state - that kind of heart-pounding, out-of-control, breathless horror that snaps you awake - and then realised that the experience of watching mother! was exactly that: a waking nightmare.

More:  Mother  Darren Aronofsky  Jennifer Lawrence  Javier Bardem  Domhnall Gleeson  Ed Harris  Michelle Pfeiffer
Follow us on Twitter @The_Shiznit for more fun features, film reviews and occasional commentary on what the best type of crisps are.
We are using Patreon to cover our hosting fees. So please consider chucking a few digital pennies our way by clicking on this link. Thanks!