Much Ado About Nothing

There are two types of Joss Whedon fan: the kind that admires how he managed to give due weight to each character in the Avengers while still littering the film with cool and funny moments, and the kind that yells "WHERE HAVE YOU BEEN? JOSS IS A GENIUS-GOD WHO SHOULD HAVE HAD HOLLYWOOD EATING OUT THE PALM OF HIS HAND YEARS AGO! ALSO I CAN SING ALL THE LINES TO EVERY SONG IN THE MUSICAL EPISODE OF BUFFY". I fall very much in the latter camp, which basically makes me a horrible person to be around. It also means that I'm the kind of person who will blindly squee his way along to see this film without giving a moment's thought to the fact that, oh yeah, everyone in it is going to be speaking 'Shakespeare'.


Don't get me wrong - I'm not acting the philistine here. I studied Shakespeare's works for a whole year at university (dontcha know) and, if I think really hard, I can just about remember the difference between his Much Ados and his Taming Shrews. The point is that there is an undeniable culture shock involved in the first 10 minutes of this film where, unlike any other in recent memory, you realise you are going to have to really concentrate on the dialogue to follow the plot. In fact, for anyone more at home with the thick-necked grunts of Vin Diesel or The Rock, this film will be damn near indecipherable for at least the first act. 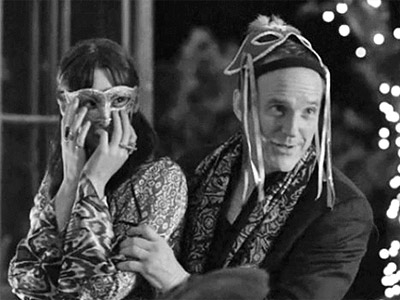 "The sight whereof I think you had from me, from Claudio and the prince and the nickynannywhioyuuigadfylq."


Far from it being a limitation though, the wonderful rhythmic lines of the Bard's colourful phrasing becomes the main reason why the film is such a delight. It even made this jaded ex-scholar of Shakespeare’s works remember what it was like to enjoy his writing without the joy-killing effort of analysing every syllable. And it seems clear that, for a vocal Shakespeare fan who famously holds frequent readings of his work, this has been Whedon’s goal all along. In a film that could be considered to have limitations in every other regard – it is, after all, a low-budget, black-and-white production filmed in Whedon’s own home while he took a brief break from Avenger duties – it is the writing and the dialogue that is made to shine. That is to say, in the absence of any real spectacle, the language here is Much Ado About Nothing’s special effect.

Although, of course, that shouldn’t take away from the marvellous performances on show. For a film that is so obviously populated by friends and colleagues from the Whedonverse (the poster might as well credit “Him off of Buffy! Her off of Angel! Him off of Firefly! Er… Him off of Dollhouse!”), the casting hardly seems based on familiarity and availability alone. 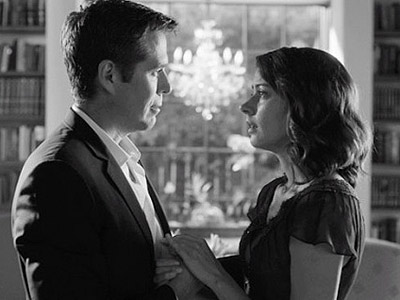 "I loved you in that thing in which I acted opposite you."


Fran Kranz boosts the zany stoner credentials he earned in Cabin In The Woods to play a raw and immature Claudio, whose impending nuptials to Jillian Morgese’s Hero forms the backdrop to this film. It is, however, Benedick (Denisof) and Beatrice (Acker) that really take centre stage as the cynical friends of each of the betrothed, bickering with each other until – you guessed it – they realise their true feelings for each other. While Amy Acker’s sharp-witted Beatrice can easily be added to Whedon’s ever-growing list of well-written, empowered women, her stubbornness frequently leads to comical foolishness. Meanwhile Alexis Denisof’s Benedick is the arrogant ladies man who becomes undone and goofy in Beatrice’s presence. When together, the pair exhibit the same sparkling chemistry that made them such a good pairing to root for back in Whedon’s TV days of fists and fangs.

Luckily, for those struggling to keep up with the farcical events that unravel toward the front of the screen, the background actors all provide much-simpler mirth and merriment. Clark Gregg gives Coulson-like cynicism another run-out, while Sean Maher makes for a devilish, deviant villain. The spoils, however, go to the comedy partnership of Nathan Fillion and Tom Lenk who, as the bumbling policemen Dogberry and Verges, provide silly, slapstick laughs, many of which appear to be unscripted. 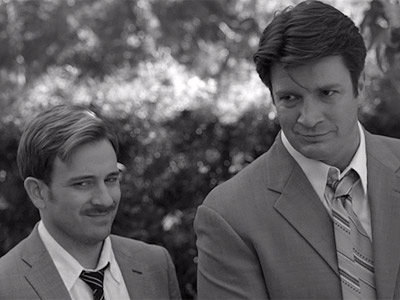 There's a pratfall coming. Wait for it...


Overall, the film seems like a difficult sell to those who aren’t already indoctrinated in Whedon’s career to date, but this isn’t simply a personal project released in cinemas to cash-in on his recent success. Whether you are a fully fledged Shakespeare scholar or an iambic pent-amateur, Whedon has yet again succeeded in assuaging all fears and delivering a well-balanced film that concentrates first and foremost on keeping its audience entertained.

More:  Much Ado About Nothing  Joss Whedon  Alexis Denisof  Amy Acker
Follow us on Twitter @The_Shiznit for more fun features, film reviews and occasional commentary on what the best type of crisps are.
We are using Patreon to cover our hosting fees. So please consider chucking a few digital pennies our way by clicking on this link. Thanks!