I'm not about to make apologies for No Strings Attached - it's a soulless movie with zero charm and almost no merits; a film which, if deleted from existence, wouldn't even make the smallest ripple in the space-time continuum. However, speaking from Natalie Portman's point of view, I can understand why she made it. After 12 months of hardcore ballet training for Black Swan, she just wanted to slum it. Acting opposite Ashton Kutcher is the equivalent of dropping down a year in school for someone like her.


No Strings Attached seeks to answer the question nobody is asking: "Can sex friends be best friends?" The question you need to ask yourself before you buy your ticket is, do you really want to spend two hours in the company of two rich, attractive megastars fucking each other senseless and crying about it? And anyway, what the hell is a 'sex friend'? No one with an actual fuckbuddy would ever say the words 'sex friend'. 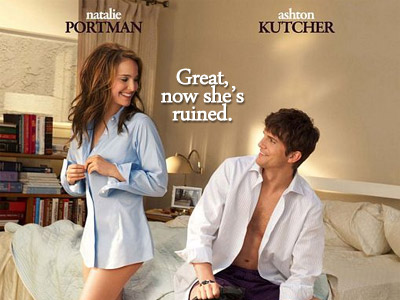 
This sex-com is directed by Ivan Reitman, which means precisely nothing in 2011 other than the fact it mercifully makes Ghostbusters III that little bit further in the distance. In a jaw-dropping gender reversal (*gawps*), Ashton Kutcher plays the soft and sensitive type who falls for Natalie Portman's feisty, independent woman (*snaps fingers*) who simply doesn't have time for relationships and has an "emotional peanut allergy" to the word love. Neither character are especially sympathetic or make for particularly good company, nor do you hope for them to end up with one another. It's a no-score draw, romance-wise.

Still, Kutcher and Portman insist on boning each other relentlessly - though without the nudity offered by fellow A-list wank-drama Love And Other Drugs - and fool themselves that sex is enough: that feelings must never come into the equation. Which is obviously a recipe for lingering close-ups, an indie soundtrack and a play-by-play from the Big Book Of Quirky Relationships, including bringing your date a bunch of carrots after she specifically asked for "no flowers". Cute, but what the fuck are you supposed to do with a bunch of carrots all night? Eat them? Throw them away? Insert them into yourself? 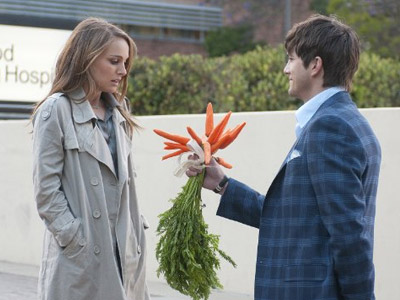 "I think you know where to put these..."


No Strings Attached drops plenty of big, obvious hints that the two leads will - gasp - fall in love, yet insists on using every contrivance possible to keep them apart, including an agonising final third which seems to go on forever. You're familiar with the now-customary 'race to the airport'-style mad dash finale? There's one of them, plus an extra half-hour of will-they/won't-they horseshit before the shocking conclusion that, yes, they will. And all you have to do is sit through Natalie Portman being a bitch and Ashton Kutcher being a dick for what seems like a lifetime.

It's the kind of film that's so worried it might offend you, it pairs up every single character in the post-credits montage (except Ludacris, the only black guy - presumably balla got to eat da pussy), just in case you didn't understand that TRUE LOVE ALWAYS PREVAILS. It's insulting, frankly, and entirely unnecessary - it's bad enough you have two leads with no chemistry, but turning a character gay just for a cheap gag? Lazy.

This kind of film is expected from Kutcher, who to be fair, is less smug than usual here, but at the opposite end of the 'could do better' sliding scale sits Natalie Portman, who can consider this her 'off polishing her Oscar' movie - a welcome breather and a nice paycheque between films of merit. However, that doesn't excuse sloppy writing, poor characterisation and an artless script that leans heavy on every cliché available. Audiences and Natalie Portman alike, listen up. You. Can. Do. Better.

More:  No Strings Attached  Natalie Portman  Ashton Kutcher  Ivan Reitman
Follow us on Twitter @The_Shiznit for more fun features, film reviews and occasional commentary on what the best type of crisps are.
We are using Patreon to cover our hosting fees. So please consider chucking a few digital pennies our way by clicking on this link. Thanks!