Now You See Me

In The Prestige, Michael Caine's Cutter posits that "every great magic trick consists of three parts or acts". You have the 'Pledge', in which the magician shows you something ordinary, the 'Turn', in which he turns that into something extraordinary and the 'Prestige', in which he makes the original item return. Now You See Me does plenty of Pledging and Turning, but fails to win over with the Prestige part. What we have here, is all the wondrous showmanship of a well-performed illusion, followed by the crushing disappointment of reality as our magician explains that it's all down to specially-built rigs and fake props. Except, here, that doesn't even make all that much sense.


I suppose it's bad form to talk about the end of a film at the start of its review, but it feels important to do so here because the third act essentially spoils everything that has come before it. In a film that deals with sleight of hand and deception, you expect there to be a twist at the end of the tale, but this film's final reveal makes very little sense and will have you disconnecting the dots of earlier scenes. Imagine David Copperfield making the Statue of Liberty disappear and then explaining that he just used a giant trapdoor in the middle of the New York Harbour. Your reaction would be "Ohhh... Wait, what?" and it's much the same here. Basically, on repeat viewing - when you already know the ending - this film won't make a lick of sense.

You get the impression that this stumble at the last hurdle is the result of the story succumbing to its own pressure. When you have a film filled with lots of small, clever moments, it clearly has to pull something out the bag for the big finale, and in this case it overshoots in a big way. But then there's a lot of enjoyment to be had along the way, mostly thanks to a plot that makes room for a lot of gimmicky stunts and fun mischief. 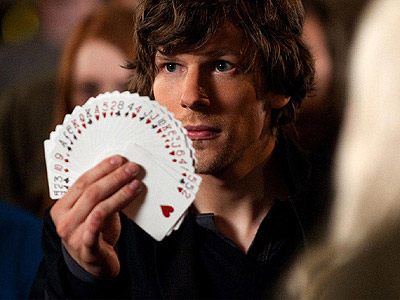 
We start with four magicians – well, a magician (Eisenberg), an escapologist (Fisher), a ‘mentalist’ (Harrelson) and a... er... pickpocket (Franco) – that are mysteriously brought together. A year later, they are performing on a Vegas stage whereby, in front of a huge audience, they apparently rob a bank vault in Paris. With no explanation for how they performed the feat, the group escape being arrested but, as they announce two more upcoming illusions, jaded cop Mark Ruffalo – who acts like he has never seen a card trick in his life – is hot on their trail.

Predictably, the pleasure here is seeing Eisenberg and co staying ahead of the game. Even when it looks like the magicians might take a misstep, you know that it’s all part of the act – the distraction, if you will – that sees them expertly perform their meticulously planned operations while often leaving Ruffalo red-faced in the process. Unfortunately, the way that this story needs to be told involves leaving us, the audience, in the dark for as long as possible. So, rather than following the far more interesting illusionists, including Eisenberg back on fine snarky Zuckerberg form again, and reprising his chemistry with former Zombieland co-star Harrelson who provides plenty of chuckles, we instead stick with Ruffalo’s frustrated loser-cop. 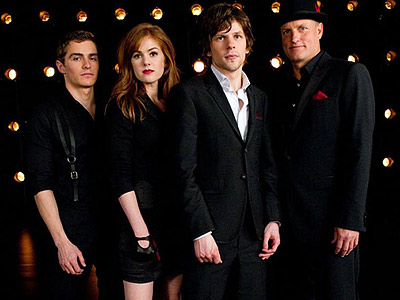 
It’s a tricky balance to maintain though. The best moments in the film are not only those in which our magicians get to perform their tricks, but also the few glimpses we see of their banter between performances. There’s a fun, flirtatious dynamic that runs through the group and, while director Leterrier is right to use this sparingly – like with any magic act, the aim is to leave us wanting more – you can’t help but wish that we were spending the film’s duration in their company.

The film comes alive in these smaller character scenes, however, thanks to the personality of its cast and the dedication with which they perform their own magical moments. It's fair to say that there are very few films about magic that work well, which is a shame because magic tricks are pretty much the single most awesome thing that any one person can do. Whether it's shuffling cards in a fancy way, making something disappear or even yanking a coin out from behind someone's ear, a well-performed magic trick on-screen is as close as you can get to a real-life special effect. As such, the film never gets any better than when we get to see the tricksters – Eisenberg, in particular – get one-up on their pursuers, whether it’s by showily escaping handcuffs or by switching out a supposedly incriminating tracking device.

Unfortunately, in this world of practical magic and real-life performances, it’s a huge shame that Leterrier often resorts to CGI to enhance the illusion. When the whole point of the film is to ask "How did they do that?" you would hope for each illusion to be achieved ‘in-camera’, otherwise every explanation feels like a cheat because you know it’s not really how the trick was done. Essentially, every illusion performed with camera edits and post-production undermines the fact that these are all supposed to be achievable in the real world. 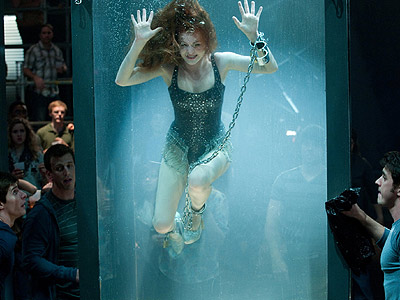 Although, it's acceptable in this case. I don't want Isla Fisher to drown.


However, this is just an occasional irritation in an otherwise hugely entertaining tale. While Morgan Freeman and Michael Caine phone in enigmatic and curmudgeonly roles respectively, fresh air is breathed into the somewhat questionable script thanks to the four charismatic magicians.

But then there’s that ending. Oh god, that ending. Come the credits, the greatest trick that Now You See Me ever performs is making all logic and sense vanish into thin air. And you won’t even want to know how it was done.

More:  Now You See Me  Louis Leterrier  Jesse Eisenberg  Mark Ruffalo  Woody Harrelson  Isla Fisher
Follow us on Twitter @The_Shiznit for more fun features, film reviews and occasional commentary on what the best type of crisps are.
We are using Patreon to cover our hosting fees. So please consider chucking a few digital pennies our way by clicking on this link. Thanks!