Having read, loved and wept over One Day: The Book, I am not qualified to review One Day: The Movie. At least, not fairly. As is the way with most books adapted to film, viewers that have read the source material bring their own baggage to the screening, meaning it's almost impossible to be objective. David Nicholls' novel forged such a powerful connection to its characters, so even though the author wrote this adaptation himself, I couldn't help but feel the film was lent shades of colour by the book; colour that simply doesn't exist on the screen. I projected 435 pages of joy onto a film that probably didn't deserve it.


The format works perfectly on the printed page: we chart one couple's relationship on the same day every year, for 20 years. In print, that's a luxury – acres of space for character development and personal growth. On film, it's a different story. Years pass by in the blink of an eye; relationships crumble and are rekindled within minutes. Every emotional beat from the book remains, but they don't carry as much weight as they should. It's a relationship on fast-forward; one that's rarely given time to blossom in the ways that the characters deserve. 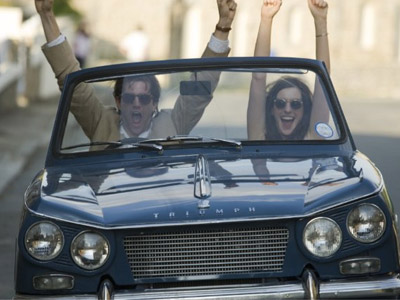 
Anne Hathaway plays Emma Morley, a Yorkshire-born student into political activism and "changing the world". Jim Sturgess plays Dexter Mayhew, a louche playboy-in-waiting. They hook up after college (without doing the deed) then continue to be friends as their lives play out over two decades, criss-crossing back-and-forth and taking in varying degrees of fame, hardship and turmoil. Dex and Em are Nicholls' greatest assets – witty, warm and with a great line in insult-based humour, they stand head and shoulders above the usual identikit romcom lovers. Here, you know they deserve each other, but they just can't face up to that fact.

Hathaway is an odd choice for Emma, given that's she's decidedly unfrumpy and most definitely not from Yorkshire – her accent speeds around the country faster than Challenge Anneka. Hathaway has a good stab at it, throwing in the odd "stoof" and "gerroff", but it's distracting at the best of times and you can't help but think there are five or six British actresses that could have done just as good a job.

Sturgess gets a bit of a raw deal. Dexter is supposed to be a lovely bloke in spite of himself, finding fame as a new lad TV presenter before spiralling into a drugs hell, but here he isn't afforded the time to develop and the character ends up stunted in his 'preening dickhead' phase. The narrative allows him some respite towards the end, but his heavier scenes fly by when they arguably represent the character's most important years. Likewise, Dexter's truncated relationship with his ailing mother cheats the character out of some dignity; when she tells her son how she worries he's "not a very nice person any more", you haven't yet seen on screen how nice a person he can be. 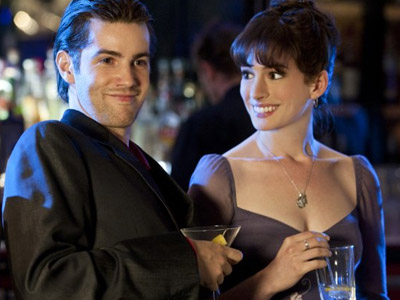 Emma did so love Dexter's impression of Russell Kane.


In the positives column, Rafe Spall is a great addition as luckless comedian Ian, managing the tricky task of making some who isn't funny appear funny, and Ken Stott brings the required gravitas as Dexter's dad (how he landed Patricia Clarkson as a wife is a gag that translates well from page to screen). There are a number of wonderful character moments not from the book that raise a smile (Emma's awkward cartwheel on the beach, Dexter's cringeworthy interview with a bunch of rappers, Tilly Killick's karaoke) but One Day is largely a faithful and surprise-free adaptation of the source material. Surprise free apart from 'that bit', obviously. Which is just as gut-wrenching and completely fucking horrible as you expect.

But then, I'm coming pre-loaded with 20 years' worth of back-story, which I shouldn't let affect my judgement. Hathaway and Sturgess obviously enjoy an easy chemistry and the time-skipping format does at least keep the pace zippy, albeit at the cost of some of the more character-building moments (Dexter's letters, Emma's school affair etc). Determined to get another point of view, I texted a friend who also saw One Day and asked her what she thought. Her response was as follows:

Well, there you have it, it wasn't just me. Maybe two stars is stingy: add a star if you haven't already read the book. But then, you could just read the book. Yeah, definitely do that. But don't say I didn't warn you.

More:  One Day  Anne Hathaway  Jim Sturgess  David Nicholls  Lone Scherfig
Follow us on Twitter @The_Shiznit for more fun features, film reviews and occasional commentary on what the best type of crisps are.
We are using Patreon to cover our hosting fees. So please consider chucking a few digital pennies our way by clicking on this link. Thanks!