First things first: let's get all the Drive comparisons out of the way, shall we? 1. Ryan Gosling is in it. 2. Nicolas Winding Refn directs it. Good, that's that done. Now forget about Drive, because Only God Forgives is about as similar to that film as I am to Ryan Gosling. And despite what you may have heard, that is, alas, not at all.


The mixed reaction to Only God Forgives at this year's Cannes Film Festival is destined to be repeated at cinemas up and down the land when it's unleashed on unsuspecting audiences. Some will find its woozy, meandering pace and reluctance to make much sense a huge turn-off, while others will allow themselves to be completely sucked into its nightmarish, fairy-tale netherworld and be spat out the other end, drenched in blood and bodily fluids, happy but in dire need of a shower. Because this isn't a film to watch, it's a film to experience, and if you don't let it grab you by the teeth and drag you to hell, you won't enjoy it.

That's not to say it's just a random collection of incoherent non sequiturs; in fact up to a point, Only God Forgives traces the well-worn plot of many a revenge thriller. Julian (a deliberately blank, near-silent Gosling) is a boxing club owner slash drug smuggler in Bangkok, whose brother Billy behaves like a proper asshat and is duly despatched on the orders of Chang, a corrupt and ruthless Thai rozzer who is also, in his spare time, the Angel Of Vengeance. Julian's mother (Kristin Scott-Thomas), an ice-cold bitch with an unorthodox relationship with her children, expects Julian to honour the family and exact bloody revenge, and her hold over him drives an odyssey which makes the Oedipus complex look remarkably straightforward. 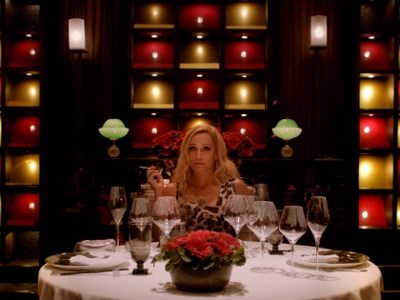 
But Nicolas Winding Refn isn't interested in making a revenge thriller. He's interested in creating an impossibly stylised dreamworld, a fucked-up headspace stuffed with motifs and metaphors, methodically rendered in achingly gorgeous compositions and clinical tracking shots and liberally splashed with body horror. If Hitchcock, Kubrick and Cronenberg went on a jolly to Bangkok, this would be their holiday video. Although Refn's Bangkok doesn't really feel like Bangkok (there isn't a single Australian tourist for a start): he uses the city as a symbol of unfamiliarity, a place where he can use strange customs and traditions to unsettle and discomfort. Is all that karaoke representative of some ethereal plane occupied by merciless gods, or is it just what Thai people do to relax after a hard day's violent retribution?

Recurring images pepper Only God Forgives with metronomic regularity. The allegory isn't subtle, nor is it 100% successful: Gosling is forever staring with childlike confusion at his own clenched fists and sinewy forearms, and frequently stands at (or is framed in) mysterious doorways, terrified to enter. By the time his mother casually belittles him for the insubstantial size of his todger, any doubts about his issues and their origins are kickboxed out of the window. It's a volley of symbolism that threatens to overwhelm, but it all just looks and sounds SO FUCKING AMAZING that any danger of overkill is swept aside.


Which brings us to the contributions of Only God Forgives' real stars, cinematographer Larry Smith and composer Cliff Martinez. Smith's lighting and compositions lend the film its otherworldliness in a way that recalls his work on Eyes Wide Shut, and it's impossible to tear your gaze away even when Chang is up to all sorts of unpleasantness with a variety of spiky objects. Meanwhile Martinez's score, working in perfect symbiosis with Smith's visuals, also evokes Kubrick in places; the ghost of György Ligeti haunts proceedings like a malevolent spectre.

Deliciously original and quite, quite mad, Only God Forgives isn't just a treat for the eye and earballs but is also a mind-bending, thought-provoking piece of work which towers over this summer's Hollywood enormogasms like a Gosling-shaped Jaeger. It might not be what you were expecting, but your expectations are about to get punched in the face. Wanna fight?

More:  Only God Forgives  Drive  Nicolas Winding Refn  Ryan Gosling  Kristin Scott-Thomas  Vithaya Pansringarm
Follow us on Twitter @The_Shiznit for more fun features, film reviews and occasional commentary on what the best type of crisps are.
We are using Patreon to cover our hosting fees. So please consider chucking a few digital pennies our way by clicking on this link. Thanks!