In bringing to prominence the idea of the American Dream in his 1931 book Epic of America, James Truslow Adams wrote that it was "a dream of social order in which each man and each woman shall be able to attain to the fullest stature of which they are innately capable". In doing so he likely didn't foresee that one day a film starring Marky Mark and The Rock would distort the notion with glorious excess, suggesting that it is a hollow hope when misinterpreted by the ignorant. Or that I would steal his quote from Wikipedia and pass it off as serious historical research.


The idea of upward mobility and status rewarding audacious effort has informed a lot of classic American crime cinema - GoodFellas, Scarface, The Godfather - in the sense that the criminal seeks to sidestep the implied 'honest hard work' aspect and grab the largest piece of the pie he can. In these cases no one is particularly concerned with the American Dream in itself; just with their own spoils. What's interesting about Michael Bay's Pain & Gain is that its main character and narrator Daniel Lugo (Mark Wahlberg) really believes himself to be "making America a better place" by pursuing a plan to kidnap a rich man and force him to sign over the deeds to everything he owns. Personal gain benefits everyone around you. It's important to note that Lugo is childishly naive, but still: this is the American Dream, Bay-style. 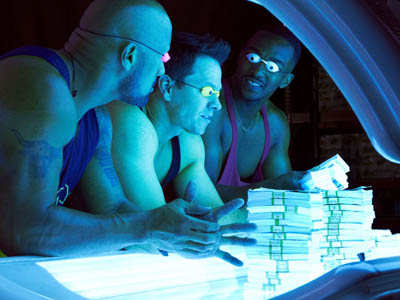 If you're stashing wads of cash in a sunbed, you've made it in America, right? (Hint: no, you're probably just a half-wit.)


That Lugo is a bodybuilder is just perfect: his is a lifelong struggle for self-improvement, and the most narcissistic kind. He and his his gym friend Adrian Doorbal (Anthony Mackie) are just on the cusp of realising that they've expended their lives' energy becoming supermen but use this only to pose in front of mirrors. Rather than redirect that energy positively, Lugo hatches a plan to rip off douche businessman Victor Kershaw (Tony Shalhoub) and take him for everything he's got, and brings Doorbal and another bodybuilder, Paul Doyle (Dwayne Johnson), along for the ride. Framed by Bay's perpetually moving camera, the three rise, then inevitably fall: none of them, it's fair to say, is the sharpest tool in the shed.

Stupidity is, if you like, a key theme here: nobody other than DuBois, Ed Harris's private investigator, makes good decisions, and the three leads revel in it. This is exactly where actors like Wahlberg and Johnson - limited, but great at what they do well - make the most sense. Both are playing men as dumb as a box of rocks, and both are screamingly funny at it. Wahlberg is constantly amped up, hyperactively misreading every situation he blunders into and making increasingly terrible choices. The Rock deadpans confusion while wearing an 'I'm on Team Jesus' T-shirt. In one scene he is inexplicably holding an oversized skateboard, and the sight gag alone is hilarious. You think back to the 90s, and remember how much fun Michael Bay is when he wants to be. 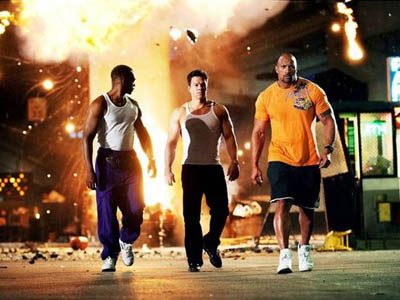 Some stuff blows up too, obviously. Not a lot of stuff, but a bit.


Since taking on the Transformers franchise Bay has become a lot of critics' bête noire for a hollow type of filmmaking that emphasises pyrotechnics over substance, but his is a style that makes a lot more sense when he's shooting people rather than robots. Here the constant zooms and tracking shots keep the story in a state of perpetual motion, just as Scorsese did in GoodFellas, and the whole point is that the characters' pursuit is a vapid one, so maybe this emptiness of which he's accused is just the right fit.

Sometimes the camera sweeps by a stripper's breasts or a beach bunny's bikini-covered arse but it doesn't linger or leer: Lugo is looking and thinking this is what he wants but, lest we forget, he's an idiot. His priorities are all wrong. When DuBois agrees to investigate Kershaw's case because "what they did to you was un-American", you realise he's the only one who understands what the American Dream's really all about, and that everyone else is chasing a worthless get-rich-quick scheme. Is this… cultural commentary? From Michael Bay? Sure, this is a film about dumb people, but it's far from a dumb film.

What I'm trying and failing to get across is that, for the first time this year, I sat in a cinema and had a joyous experience. Pain & Gain reminded me of the dopey excess of Bad Boys or Con Air, with the rise-and-fall, cautionary-tale narration of Blow or Casino. It felt like the 90s; like I'd just bought it on one of those DVDs that advertised 'interactive menus' as a special feature. It's a perfectly structured crime story, light on the action set-pieces you expect from its director, and it's funnier than any comedy this year.

So just because Michael Bay is a critical pariah, don't be dissuaded. Like Armageddon or The Rock before it, Pain & Gain isn't a guilty pleasure: it's just a pleasure.

More:  Pain And Gain  Michael Bay  Mark Wahlberg  Dwayne Johnson  Anthony Mackie  Tony Shalhoub  Ed Harris  Rebel Wilson
Follow us on Twitter @The_Shiznit for more fun features, film reviews and occasional commentary on what the best type of crisps are.
We are using Patreon to cover our hosting fees. So please consider chucking a few digital pennies our way by clicking on this link. Thanks!