Like any right-thinking adult, I make it my business to scare a child at least once a week. Otherwise there's a risk they could grow up soft, I always think, what with their Bebos and their Sylvanian Families. Happily, I can now take the day off every once in a while, because stop-motion animation ParaNorman should put the frighteners on them. Might even make them laugh a bit too, but then you can do that just by tickling them.

Laika, the studio responsible for Coraline and now this, have trodden the funny/scary line very deftly here, not so much by adding each element in equal measure, but by mixing them up together. The approach is to appropriate the standard images used in horror – the sudden face at the window, the ghoulish screaming apparition – and show them to a young audience in such a way that they'll appreciate how the characters must be scared, but not end up wetting the bed in terror that night themselves. Remember how Skeletor was an evil skull in a hood, so you should've shit yourself every time he turned up, but he was obviously just a bit daft so it didn't bother you? Yeah, like that. 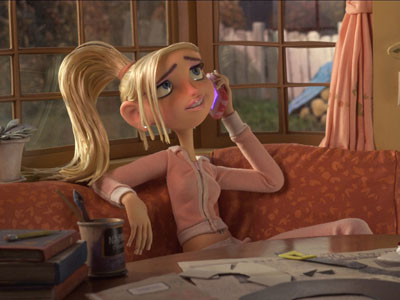 Tulisa Contostavlos was happy to appear in this cameo role.

ParaNorman takes as its starting point a pretty well-worn premise: the lonely kid with a special ability that no one else believes he has. In this case it's Norman, and he can see dead people. His family try to discourage him and his classmates bully him, except for Neil, another outcast. He's visited by the ghost of his mad uncle, who tells him he needs to perform an ancient ritual to stop the dead from rising and taking over the town, then it's pretty much zombies, ghosts and car and skateboard chases all the way to the finish line.

Throughout there's a knowing air about horror that'll please parents, with the usual gags about zombies being easy to outrun and some well-worked references to Halloween amongst others. There are some jokes that are most definitely for the adults too: it certainly earns its PG certificate. And through the fact that people actually die in it, ParaNorman takes some risks given its target audience. It's dealt with in a much more knockabout way than, say, the heartbreaking early montage in Up, and, in inhabiting a world where ghosts exist, it's tempering the finality of death, but it's still making children confront the idea of mortality head-on in a way that breaks with the conventions of storytelling for a young crowd. 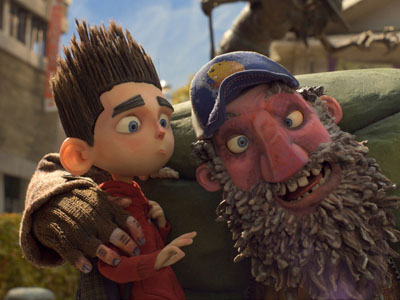 Even the issue of children being snatched off the street by hobos is dealt with in ... no wait, that's his uncle.

You've got to admire animators, especially when they work in stop-motion. The dedication and perfectionism involved, in which they choose to take an extra three days to get one little raised eyebrow just so, is staggering. These figures they've created are capable of expressing a huge amount of emotion and nuance, and the makers have taken the time to construct a world where everything looks cartoonish and yet recognisably consistent with the genre conventions of horror. As I say, it's a tricky balancing act between two generic polar opposites, expertly pulled off. My only real complaint is that the 3D is pointless: many scenes seem to be rendered in 2D anyway, and so I found myself looking over the glasses half the time so as to fully appreciate the colour without the murky filter.

You can't much argue with a child's view of a children's film, though. After the screening I attended, I overheard a woman ask her son whether he'd found it scary. No, he replied – and a child's is a far better endorsement than I'm qualified to give. Didn't last long, though: I jumped out at him from behind a bush on the way home. Scared the shit out of him.

More:  Paranorman  Animation  Kodi Smit-McPhee  Tucker Albrizzi  Anna Kendrick  Casey Affleck  Christopher Mintz-Plasse  Leslie Mann  Jeff Garlin  John Goodman
Follow us on Twitter @The_Shiznit for more fun features, film reviews and occasional commentary on what the best type of crisps are.
We are using Patreon to cover our hosting fees. So please consider chucking a few digital pennies our way by clicking on this link. Thanks!