Passengers is a sci-fi with an easily adaptable premise: what if, on the 120-year journey through space to colonise another planet, you were the only person on your spaceship to wake up? You can imagine dozens of versions of this movie. The Werner Herzog version is slow and considered and intimate and depressing and everyone dies. The Michael Bay version is huge and costs a billion dollars and has bikini models in zero gravity and it turns out the spaceship is evil. Nestling uncomfortably in the halfway point between the two is Morten Tyldum's Passengers, a shiny spin on Jon Spaihts' screenplay that can't decide if it's a blockbuster or a character piece and ends up being neither.


I like how basic this movie is. I like that it's essentially a two-hander. I like that it casts Jennifer Lawrence and Chris Pratt, literally the two sexiest people in the known universe, and then basically rubs their action figures together to make them fuck. Passengers is not a deep movie: Solaris it ain't - hell, it's not even a Sunshine. But it doesn't overreach. It delivers on message its warning about over-reliance on automation, it poses a few sixth form-level moral conundrums, it shows Chris Pratt's bum and Jennifer Lawrence in a swimsuit, then it explodes some shit just because it can. It's a thinkpiece movie for people who don't really like thinking all that hard.

Though dangerously, volcanically sexy, the characters are relatively bland: Pratt's engineer [slight spoiler alert] agonises over the not-especially charming decision to wake up - and effectively doom - Lawrence's writer [end slight spoiler] and spends the rest of the movie making reparations for that decision, but it's really the only interesting thing about him. Lawrence plays an author, who in time honoured fashion when it comes to movies featuring writers, writes terribly. (Also *laugh out loud* at the thought of a writer making the cut of the 5,000 people chosen to populate Homestead II). Lawrence and Pratt are effectively very sexy window dressing. Nice plants on a windowsill. The smiling couple in the photo that comes with your wallet. Etc. 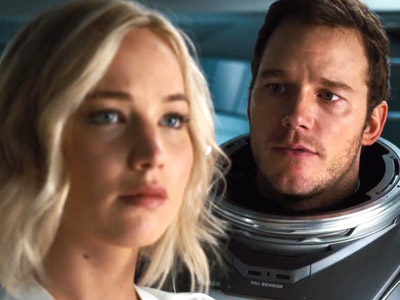 
Character is secondary to concept here, but it's a fascinating one, perhaps more suited to a horror movie than a sci-fi: how much would you trust the software fated to safeguard the future of the human race? Buried (not especially deep) in Passengers is a cautionary tale about over-reliance on automation and the ruin that way lies. We trust Apple and Google with our darkest secrets - but would we trust them with our lives? The thought of one sole company being responsible for 5,000 lives over the course of 120 years in the darkest recesses of space is ripe with premise, but Passengers is only partially interested in exploring that concept.

Example. Pratt's hibernation pod malfunctions and he wakes up 90 years early. The first thing he does is climb back in and go to sleep, but the lid locks him in and doesn't put him to sleep. Death by bad design. The Ridley Scott version of Passengers maybe cuts off his air and makes him suffer a while; the Tyldum version chickens out. There's a streak of wickedness here where Pratt's character is denied all but the most basic coffee options because he's not a premium passenger; there's definitely a Terry Gilliam version of Passengers with an underclass hero undergoing a futile struggle against an automated utopian bureaucratic paradise that's determined to deny the last man on Earth a luxury. Tyldum's version merely touches on the nightmarish idea that one day a tech corporation will be in charge of your oxygen or that you might die if you forget your password.

Instead, Passengers goes the screensaver route: an inescapably gorgeous movie starring a picture perfect cast inhabiting a beautiful world created by the guys who probably also do Sony's top-end TVs. It's not hard to imagine a dozen different ways the concept could be improved upon, but it's also not a difficult film to enjoy. If it had built towards something, anything other than its own rather underwhelming logical conclusion, then Passengers might have been worth recommending - as it stands, it's an inoffensive, glossy movie that always feels like you're in the safe hands of a factory robot, efficiently putting the pieces together. You can't shake the feeling that the Michael Bay version, with the lingerie models and the car chase somehow and the spaceship sponsored by Bing, might have been more fun.

More:  Passengers  Morten Tyldum  Chris Pratt  Jennifer Lawrence  Michael Sheen  Sci-fi
Follow us on Twitter @The_Shiznit for more fun features, film reviews and occasional commentary on what the best type of crisps are.
We are using Patreon to cover our hosting fees. So please consider chucking a few digital pennies our way by clicking on this link. Thanks!