It's fair to say Disney's been getting a little edgier in the films it distributes in recent years. But here's a new one on me: People Like Us, a likeable enough cookie-cutter 'douchey guy learns to be less douchey' flick, is at its core a film about incest. You heard.


Not that there's any straight-up, balls-to-the-wall sister-fucking going on, you understand. But the key narrative angle it takes amounts to a burgeoning romantic relationship between half-brother and half-sister, and even though it's kind of satisfying overall, it leaves a strange taste in the mouth. You know, like Lipton Ice Tea. Or actual incest, for that matter.

It all begins on a familiar note and doesn't do much in the way of changing tune. Sam (Chris Pine) is a confident, slightly brash salesman who learns that his father has died. He has to fly home for the funeral with girlfriend Olivia Wilde, but makes sure he misses it by pretending to forget his passport. Daddy issues, you see: his father was distant and unengaged, and Sam hasn't been home in years. The lawyer tells him there's no money for him in the will, but hands over a bag with $150,000 in it, to be given to Frankie (Elizabeth Banks), the half-sister he never knew he had. Sam tracks her down but, rather than handing it over straight away, gets to know her and her wayward son without revealing who he is. 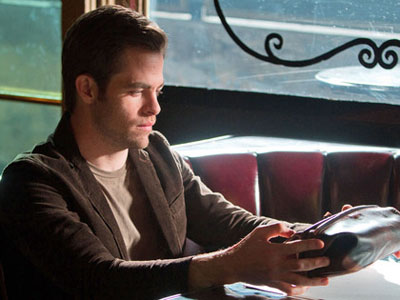 "Illogical, Captain. The progeny of two siblings would have a 68% chance of birth defects."

All of this has something in common (arf) with the Tom Hanks film Nothing in Common, by way of an overconfident guy getting his priorities straight through learning the true meaning of family. Pine is no Hanks, obviously, but he's certainly likeable enough to make you invest in his journey.

But it's the journey itself that proves the film's main problem. Sam's decision to hide his identity, which doesn't make much sense in any case, means that the narrative arc becomes all about whether or not he can tell Frankie the truth, rather than about his learning what it means to have a sister and to be a better person. And even more problematic is that their getting to know each other is presented in exactly the same way as a romantic comedy would a developing courtship: lots of flirtatious joking to demonstrate that they have 'chemistry'; montages of carefree, laugh-laden rides in a convertible; woman glances over at man when he's not looking and smilingly nods to herself, and so on. Frankie, though it's never explicitly stated, falls in love with him. 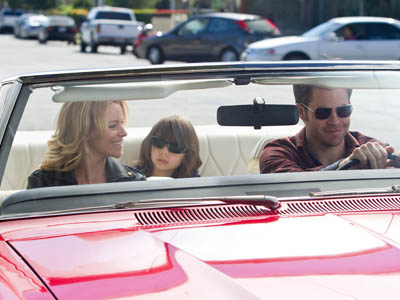 Hey, if you're going to bang your sister, might as well do it in style, amirite?

The fact is, a Hollywood film knows no other way to present this setup: there's no template for a man and a woman developing a platonic friendship, so here there's no option but to paste in the standard romantic one and hope for the best. Olivia Wilde, who's conveniently left Sam to it and disappeared for most of the film, pops up again and kisses him a lot to try and make us forget we've essentially been sold a romantic relationship between brother and sister, but the damage is done.

And yet if you ignore this, there's a perfectly satisfying film here. Both leads play very well off each other (Banks continues to be about as warm and funny a romcom actress as you'll ever find), Michelle Pfeiffer does a lot with a small role as Sam's mother, and a reveal near the end is pretty close to tear-jerking. It's just ... you know, the incest thing. This is a romantic drama, no matter what it's billed as. If nothing else, it'll be interesting to see what category they put it in on Netflix.

More:  People Like Us  Chris Pine  Elizabeth Banks  Michelle Pfeiffer  Olivia Wilde
Follow us on Twitter @The_Shiznit for more fun features, film reviews and occasional commentary on what the best type of crisps are.
We are using Patreon to cover our hosting fees. So please consider chucking a few digital pennies our way by clicking on this link. Thanks!