"A brazenly unconventional ghost story" says Time Out's poster quote for this film, presumably because "A profound and intimate exploration of humankind's innate need for existential crisis" didn't do the right job. There’s no denying that Personal Shopper is a ghost story of sorts, but that hardly seems an adequate description. It may begin with some spooky fare about a haunted house and a terrifying manifestation, but this isn't a film of jump-scares and sudden bangs, it's a film that gives the audience the space and respect to ruminate on the very concept of an afterlife. These ghosts don't say "boo!", they say "who?" and indeed "why?" as well as "how does that make you feel? Mm-hmm, mm-hmm. Let's talk about that."


Oliver Assayas’ intimate, thought-provoking ”ghost story” is mostly an exploration of bereavement, grief and desolation. It's about one person, Kristen Stewart's Maureen - a personal shopper for a Parisian rich bitch by day, and a medium by nature - mourning the death of her twin brother (also a medium) and awaiting a sign from him from the beyond as per the pact they once made. And it's a beautifully ambiguous examination of unfathomable ideas that addresses giant impossible considerations on a small, reflective scale. As a result, Maureen feels like the most personal of personal shoppers.

What she’s shopping for, besides the array of designer dresses, shoes and accessories for her high-profile celeb boss, is a sense of purpose. The irony is clear: Maureen is a lost soul looking for a tether to this world. She feels restless and empty, losing a part of herself when her twin dies and now struggling with her own sense of self as she waits in limbo for any kind of connection to her former life. And the longer she waits, the more desperate she gets. Maureen might be the first ever person to be haunted by the absence of a ghost. 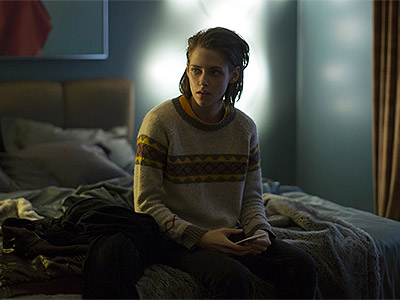 Which makes for a terrible Halloween costume by the way.


All in all, the film is an acquired taste, not least because it stars an actress who has consistently resorted to dour-faced hair-chewing and sleeve-tugging whether she’s tackling glitter-fanged vampires or feminist empowerment dramas. While critics haven’t always looked favourably on Kristen Stewart as an acting talent, this is a role that actually needs that distinct style of visible anxiety. As such, this is objectively the best performance of Stewart’s career. She flits between hollow listlessness and heightened agitation – two behaviours that are well within her discomfort zone – and she proves to be the perfect pairing for Assayas who insists on being equally divisive here in other ways.

While the glacial pace and largely abstruse narrative are likely to be reasonable sources of contention for a lot of viewers, the biggest eye-roller for those dissenters is going to be the film’s entire middle third, the entirety of which is a long, drawn-out conversation via text message… complete with key clicks. The anonymous, vaguely threatening exchange that unravels during this section is conducted as sexy power-play, with an unknown person challenging Maureen to find herself by daring her to be someone else, ordering her to dress up and masturbate in the clothes she has purchased on behalf of her boss. And it requires a lot of patience because text messages are, it seems, the least dynamic way to have a conversation on screen, not to mention that the continuity of the whole segment is ruined by the phone’s timestamps and OH MY GOD THOSE CLICKS ARE SO ANNOYING. 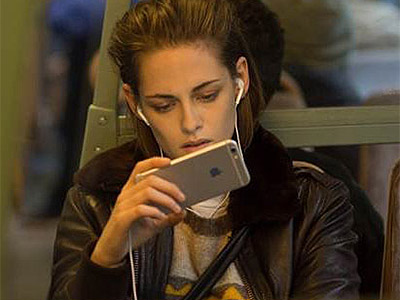 Go to Settings. No, SETTINGS! Oh, just put it on vibrate.


But thematically it works brilliantly. What could be better for Medium Maureen to reach out and find solace in a disembodied voice? A voice that, in what is the lowest point of her sheer desperation, she even wonders could be her brother’s. Just in case, when he passed away and his soul departed from this mortal coil ever to be absorbed into the light of eternal deliverance, he manages to find a way to send a few emojis from the other side. Oof, think of the network charges.

It’s a moment that could have easily been mishandled in another’s hands, but Assayas’ greatest strength here is in allowing so much room for interpretation. It may be maddening for some viewers, but how else do you delicately handle a sensitive plot that relies heavily on the abstract? Assayas rightfully places the whole story in the hands of his audience’s perception and ability to fill in the gaps. Which you could argue means that at least three of those stars at the top of this page must be thanks to my own awesome imagination. And to anyone who didn’t like it as much? Clearly your ghost story lacks a certain vision.

More:  Personal Shopper  Olivier Assayas  Kristen Stewart
Follow us on Twitter @The_Shiznit for more fun features, film reviews and occasional commentary on what the best type of crisps are.
We are using Patreon to cover our hosting fees. So please consider chucking a few digital pennies our way by clicking on this link. Thanks!