One of the many questions that spring to mind while watching Pixels - such as "Why doesn't any of this make any sense?" and "What would it take for Adam Sandler's tired Deputy Dawg face to register an iota of genuine emotion?" - is: Who is this film supposed to be for? As a PG movie packed full of fairly obscure 80s references, you can only assume that its core audience is nostalgic parents who won't mind it when, on the journey home afterwards, their child takes a brief pause from unpacking the latest expansion kit for their favourite immersive online RPG to ask: "What's a Donkey Kong?"


Being an Adam Sandler film, this is all to be expected, of course. Because it has long been established that the actor only wants to make films based on his own sensibilities, no matter how outdated, lazy and infantile they might be. For instance, here we have a film where the main message seems to be 'nerds can be heroes too', despite that particular tide turning 20 years ago, and where nonsense rules about how this logically problematic concept can actually exist are made up on the spot depending on what the scene needs to happen. 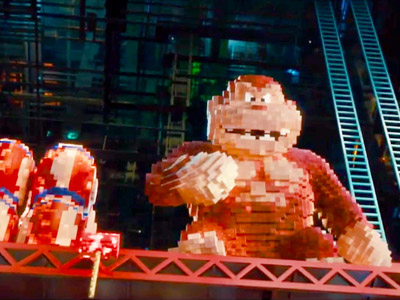 
It's a film where we are expected to believe that, just because Sandler's expert 80s gamer once got a high score for steering 8-bit Pac-Man away from 8-bit ghosts, he is the best qualified person to drive a real-life mini around the real-life streets of real-life New York trying to chase down a giant monster Pac-Man. Because something something strategy.

It's a film where an entire set-piece takes place in London and the main running joke is "Don't us Brits talk funny? Do what, do what, knock it on the 'ead, luv a duck, etc" and that almost everyone there - including Sean Bean - can't seem to do a half-decent English accent.

It's a film where an early 30-second cameo from Dan Aykroyd confuses and confounds until there is a very pointed, disgustingly cynical showcase of his own Crystal Head brand of vodka later on and you can imagine the exact basis for his single-clause contract.

It's a film where - most criminally of all - despite her easily being the most comically talented member of the entire cast, Jane Krakowski is sidelined into a non-existent role as President Kevin James' First Lady and says barely more than nine words.

However, being completely fair, it's also a film where there's some entertainment to be found. While Sandler and James drag their feet throughout and barely manage to speak their lines thanks to spending the entire running time trying to mentally calculate whether their big sacks of money can actually fit inside their massive, luxury trailers, Josh Gad and Peter Dinklage approach their parts with much more enthusiasm. 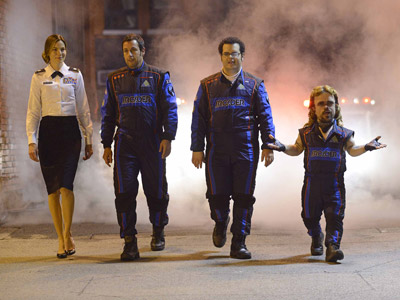 Sandler, here visibly pissed off at wardrobe having refused his request to just do the scene in his sweatpants.


While Dinklage's performance is often questionable (the question apparently being: "Is it funny when a 46-year-old man says 'tubular'?"), but it's always interesting nonetheless. Gad, on the other hand, gives the film its funniest moments and, whether through overblown indignation or screeching desperation, its best reactions shots.

And, of course, there's some fun to be had in the arcade characters themselves, although I'm not sure if, like I did, pointing and laughing because the ostriches from Joust have suddenly appeared should qualify as entertainment. In any case, things get increasingly frustrating as characters continue to flout the supposedly hard and fast arcade rules that they've spent so long establishing.

And then, at the end, the entire alien invasion, the destruction caused and the implications for the whole planet are just shrugged aside with a few choice words by President Kevin James. Because who needs a real conclusion anyway? Particularly when Adam Sandler seems to just be coasting whatever is left of his career, resigned to the fact that his game was over long ago.

More:  Pixels  Chris Columbus  Adam Sandler  Kevin James  Michelle Monaghan  Josh Gad  Peter Dinklage  Jane Krakowski
Follow us on Twitter @The_Shiznit for more fun features, film reviews and occasional commentary on what the best type of crisps are.
We are using Patreon to cover our hosting fees. So please consider chucking a few digital pennies our way by clicking on this link. Thanks!