You think a Christmas movie where Michael Shannon is mistaken for Bigfoot sounds weird? You don’t know the half of it. And trust me, you don’t want to know the rest. Unless you do, in which case that’s cool, we’re all friends here. I’m being purposefully vague because, well you’ll see... Let’s just say the internet has a lot to answer for.


There's no real way to discuss Pottersville, aka The Michael Shannon Christmas Bigfoot Movie, without first addressing a pivotal plot point that occurs roughly five minutes in. And while not strictly a spoiler, it's a surprising moment to say the least. A delightful treat for some in fact. You ready? Okay. After finishing a shift early at his quaint local store selling quaint local bits, humdrum Maynard (Shannon channeling, incredulously, Seymour Krelborn from Little Shop of Horrors) returns home to find his wife Connie (Christina Hendricks) in bed with Sheriff Jack (Ron Perlman). They are furries. Like, full on hide-your-boner-in-PetSmart, Mum-do-not-google-that furries. They dress up as cute animals to rut like beasts. 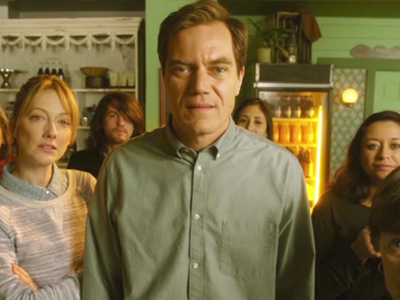 Just get through it and think of all the floral shirts you'll be able to buy.

Maynard isn’t into it, and consoles himself with a rage-filled drinking binge which sees him put on an improvised gorilla outfit and run amok around town - presumably to see whether he too can experience a sexual high from dressing like a creature that shits where it stands, although sadly this aspect is never fully explored. Before the night is through several locals have mistaken Shannon's hulking matted frame for Bigfoot, leading to a flurry of media activity and the town becoming prosperous on the back of a newfound tourist trade - leaving Maynard with the dilemma of whether to watch his friends and neighbours reverse their fortunes thanks to the revitalising power of sasquatch tat, or come clean and ruin everything.

Amongst this moral chewing over there's fun to be had courtesy of a monster hunting reality show dropping by, fronted by the egotistical-yet-cowardly Brock Masterson (Thomas Lennon), and Ian McShane’s grizzled Quint-esque hunter Bart, who delivers the immortal line “am I the only one here who doesn't want to hump Bigfoot?” after stumbling across a furry sex party in full swing. Because I’m not sure if I mentioned it already but furry sex plays a central role in this film? And everyone seems to know what furries are already and is totally fine with it? Not being judgy but there’s a normalisation here I wasn’t previously aware of, and I consider myself a bit of an expert at normal non-weird mainstream sex. 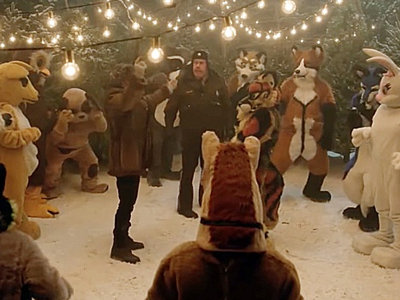 The laundry costs for this lifestyle alone must be excessive.

Anyway. Films like Pottersville that wed such bizarre and specific sequences of ideas can usually be trusted to know what they are, but you get the feeling that each person involved was told something different about what this was going to be. Once we get beyond the weird stuff we’re left with the sight of several notable household names unable to lift what is an obviously cheap production - one that looks more like a Christmas Channel TV movie than a Hollywood flick. And poor Judy Greer - reliably funny, but here consigned to a token love interest role for Michael Shannon to put his gob around at the end, despite no previous hints at a romance.

Where Pottersville triumphs - somewhat aptly given the ongoing mystery of Bigfoot’s existence - is in opening the mind. I frequently found myself wondering aloud 'what is going on?’ and 'how did this happen?’. But perhaps the biggest question of all is who this film is aimed at. The schmaltzy Hallmark-esque poster that left many as bewildered as the looks on the subject’s faces gave no hint of the seedy underbelly running throughout, almost as if it was purposefully designed to lure people in before blindsiding them with furry fuckfests. Don't be surprised if you're fielding a lot of awkward questions from elderly family members at gatherings this holiday season.

I don't know how or why Pottersville exists, and suspect digging into the history of such an inexplicably star-laden production will turf up clips of Michael Shannon grimacing through interviews as his brain tries to escape his massive skull, or industry websites blathering on about contracts or whatever - but I don’t care. For all its flaws, the message of Pottersville is one of love and forgiveness, and at this time of year I think that’s something we should embrace wherever possible. If Bigfoot is out there somewhere, I hope he has the very merriest Christmas of all.

More:  Pottersville  Michael Shannon  Judy Greer  Ron Perlman  Christina Hendricks  Ian McShane  Thomas Lennon  Bigfoot  Furries
Follow us on Twitter @The_Shiznit for more fun features, film reviews and occasional commentary on what the best type of crisps are.
We are using Patreon to cover our hosting fees. So please consider chucking a few digital pennies our way by clicking on this link. Thanks!