The London Film Festival's in town, and that means one thing: arty stuff. Yes, lots of films about French people dicking about on windy beaches staring moodily at the horizon, or sitting in bedsits looking fed up for an hour and a half. Cracking. Here's one: Prince Avalanche. It's about these two blokes, right, and they're in the woods, and they don't talk to each other much. Now this is what a film festival's all ab... wait a sec, it's not playing at the festival? Has anyone told them?


It's not like I only watch films in which the President's daughter gets kidnapped and he rescues her in a harrier jump jet. I like a bit of slow-building existential musing: you know, Gerry, Into The Wild, that sort of carry-on. I mention these because their themes of solitude and wilderness come to mind when you watch Prince Avalanche, whose blurb in the monthly booklet for the Ritzy Cinema I just received cheerfully announces that "nothing much happens". It's not an unfair summary, plot-wise, but you’ll find a lot to like in its two central performances, played as polar opposites who come to realise they're more alike than they thought. 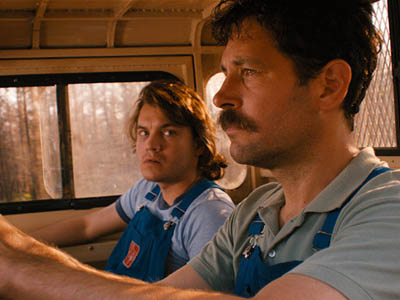 
Alvin (Paul Rudd), tetchy and uptight, hires his girlfriend's younger horndog brother Lance (Emile Hirsch) to work with him painting lines on the roads through a Texan forest just levelled by wildfire in the 1980s. There's a theme of change and new beginnings being sparked off here: forest fires are sometimes left to burn, because they can promote regrowth and allow vegetation to spring up afresh. Everything starts again from scratch. They don't know it yet, but that's what Alvin and Lance need to do.

Both are stuck in their own ruts: Alvin's convinced himself he took this lonely job to be a provider for his girlfriend, but really he just enjoys being alone where he's not challenged. Lance talks about nothing but sex. Neither is ready for the relationships that preoccupy them, and they're both coming to a flashpoint.

Rudd is perfectly cast. Of the Apatow set he's the one best suited to breaking out into successful dramatic roles, and there's a quietness in him here, suggesting more going on under the surface than the stoic state of perpetual annoyance he's projecting. The scenes after Lance goes back into town for the weekend, leaving Alvin alone in the woods, show us the silliness he keeps under wraps when others are around. 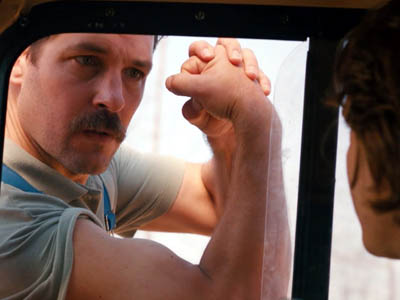 "Strength of the bear!"


Conversations between the two men consist mainly of Lance boredly prodding at Alvin to provoke a reaction of any kind, until a change in circumstances later on lets the older man loose and they get angry then boozy. When they start to fight there's some hilariously immature sniping back and forth ("You're the worst person in the world!"), and when they begin to accept each other it's without overt reconciliation, just a pleasingly gradual opening up to talk. An agreeably indieish acoustic score noodles away behind them throughout.

David Gordon Green, determinedly returning to independent film after a string of studio pictures, is confident enough to have very few actors making up the numbers: aside from the two leads there's a scene-stealing old truck driver (Lance LeGault) who pops up and dispenses moonshine and homespun wisdom, and a lady in a hat whose significance is unclear. To me, anyway. It was probably obvious to everyone else. See, this is the kind of thing that's second nature if you go to a lot of festival films. A woman in a hat pops up, there's some sort of hidden meaning. I'd be so much better at this if I paid attention.

More:  Prince Avalanche  David Gordon Green  Paul Rudd  Emile Hirsch  Lance LeGault  Joyce Payne  Gina Grande
Follow us on Twitter @The_Shiznit for more fun features, film reviews and occasional commentary on what the best type of crisps are.
We are using Patreon to cover our hosting fees. So please consider chucking a few digital pennies our way by clicking on this link. Thanks!