For all the talk of Prometheus "sharing the same DNA" as Alien, Ridley Scott's prequel doesn't bear much family resemblance to its granddaddy. The economy of horror that served his 1979 effort so well is replaced by a big-budget, star-gazing sci-fi that wants you to know it has size on its side. Hugely ambitious and staggering in its grand designs, Prometheus is almost hamstrung by the fact it is an Alien movie at all – the mishmash of grotesque body-horror and chin-stroking existentialism does not always make for the most coherent movie, but it is at least an entertaining one and certainly no black mark on the franchise.


Prometheus has a huge existential theme at its core – where do we come from, and why? Scott, making his return to sci-fi since Blade Runner in 1982, works in a scale to match these massive theological implications and isn't ashamed about posing loftier questions than who will survive and what will be left of them. The movie's fascinating opening scene, presented with nary a hint of context, hints that Prometheus' palette is way larger than you may have thought from those armpit-dampening trailers. 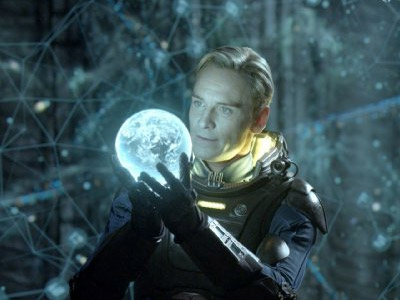 
The problems with Prometheus mostly lie in Damon Lindelof's script – a screenplay that includes countless scenes of intrigue but precious little reason. In true "From the creator of 'Lost'" style, every question you come to ask is only ever answered by another, bigger question. This might come as a relief to those of you too proud to be held by the hand and walked through a movie point by point, but it frustrates in equal measure anyone who thought that Prometheus' grander mysteries might have meaning. You will not find answers on LV-223. It does not build any bridges or join any dots. If anything, you'll be more thirsty for knowledge than you were before it started – not necessarily in a good way.

The closest Prometheus comes to replicating a feel for the franchise is in its casting. Noomi Rapace was a superb choice for Elisabeth Shaw, undergoing largely the same transformation from unassuming science boff to axe-wielding femme icon that Sigourney Weaver did. Rapace is put through Ridley's wringer and, a slightly shaky British accent aside, convinces as a woman tested to the core of her beliefs and pushed to the physical limits of her womanhood. Charlize Theron, as Weyland rep ice queen Vickers, is a neat spin on the corporate Company stooge, while Michael Fassbender's android David is a fine addition to the franchise's memorable production line of synthetics, his contempt for his human colleagues barely contained by his programming.

Scott drops his crew right into a melting pot of drama, landing on a distant planet with hopes of literally meeting their makers. Prometheus is at its best when merely teasing the horrors to come – the gigantic head looming over an array of suspiciously egg-like pods, bugs that literally get under your skin, odd ooze, and that quintessential Alien harbinger of doom: the blip on the radar. Once the tension's built up so much it has to burst, the results are mixed – for every iconic scene (two words: medi-pod) you are never more than a few minutes away from an action cliché (the biggest offender: an absolute insistence on out-running a giant collapsing spaceship instead of just sidestepping it). 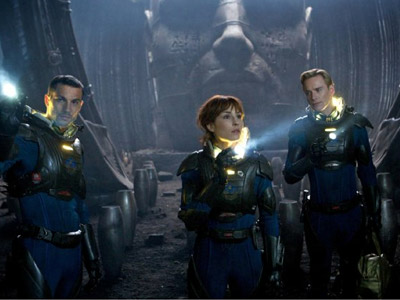 Also, if when exploring an alien planet you find a giant head: run like fuck.


It's the movie's final third which disappoints most – it's not that it lacks momentum or threat, but that it channels all its energy into crossing the finishing line in a sprint without really touching on what made the first two-thirds so fascinating. Odds and ends don't really match up; motivations are left unexplained; contrivances pile up – too much falls into the category of 'Cool-looking mysterious shit'. Once the credits roll and the fog lifts, you will take issue with lots of Prometheus' dead-ends and plot non-sequiturs. When the heart-rate slows, you may well come to the conclusion that you've been a little duped – not enough of the movie's early promise is made good.

Why are we here? Who are our makers? For all its ambition and scope, Prometheus never really had any intention of answering those grandiose questions – it turns out the plan all along was to make sure you're having too much fun to notice. It's hard not to feel a little underwhelmed come its conclusion, but considering its heritage, a sci-fi/horror as highly polished and interesting as Prometheus can hardly be considered a disaster. Maybe lower those expectations for Blade Runner 2 a tad.

More:  Prometheus  Michael Fassbender  Noomi Rapace  Ridley Scott  Alien
Follow us on Twitter @The_Shiznit for more fun features, film reviews and occasional commentary on what the best type of crisps are.
We are using Patreon to cover our hosting fees. So please consider chucking a few digital pennies our way by clicking on this link. Thanks!