DO I OFFEND YOU, YEAH

Review: After Life is not deft enough to avoid causing friendly fire

To promote his new Netflix show After Life, Ricky Gervais is out doing the podcast rounds, and telling anyone who'll listen why people who are offended by any of his jokes must have misunderstood them. He's probably right in some cases. But what he never considers, or at least never acknowledges, is that if a lot of people are misunderstanding your jokes, maybe it's because you aren't skilled enough at delivering them.


One such interview was on James O'Brien's podcast Full Disclosure, where Gervais used numerous examples to defend the principle that offence occurs only in the person perceiving it; as long as he doesn't intend to offend, he isn't responsible for how someone receives a comment. And in a sense he's right: there's merit in his point that people are generally only offended when they think they're the target. In a stand-up set full of jokes about famine, Aids, cancer and the Holocaust, he says it was only the last that prompted a letter of complaint from a Jewish society, whose representative had enjoyed all the other jokes, just not that one. (His account of the exchange is very #AccidentalBrent.) But the whole thing would ring more true if he weren't so transparently desperate to offend.

Discussing his stand-up, he's at pains to stress that on stage he's playing the character of an idiot who's getting things wrong and so doesn't mean the things he says, erecting a layer of distance between himself and the material. Therefore he's not punching down when, for example, in Humanity he employs unpleasant stereotypes about working-class mothers who've had several children, seconds after an ironic defence of how his wealth doesn't mean he can't do relatable material. His argument is that critics have missed this on-stage construct and are mistakenly critiquing the words of the man himself rather than the character. But I haven't missed it; I just think he isn't good at it.

The problem is that we know, or think we know, the man too well to buy the on-stage character. In particular it's that in his public appearances he's always either saying unpleasant things, such as at the Golden Globes, or defending his right to say unpleasant things, so audiences and critics can be forgiven for not buying it. I don't think this reveals a blackened soul at heart, but it does mean that he hasn't drawn a clear enough line between him and the character for it to succeed. In the podcast, he references a Golden Globes joke about airbrushing on the Sex and the City poster, which Kim Cattrall thought ageist, but he argues targets Hollywood's dismissal of older women. If people misunderstand your jokes, O'Brien puts to him, maybe they haven't worked. He replies that if someone doesn't grasp that 2+2=4, that doesn't mean the maths is wrong. Which means that the onus is on Cattrall to catch up: there can't possibly be a fault in the delivery. Taken to its logical extent, the argument is that she's stupid. 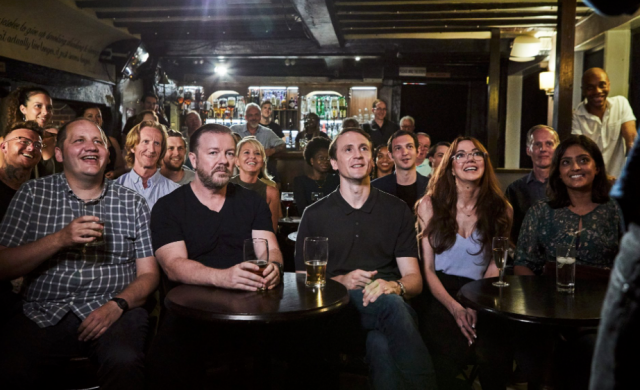 
After Life is full of ugly barbs deliberately intended to offend, written as such with the justification an afterthought, through the mouth of a character who's given up on pleasantries following the death of his wife. What if, he's asking, you didn't care about consequences and so just said whatever you wanted? The implication is that we all want to be horrible all the time, but don't because of social mores, which is a pretty fundamentally unlovable premise for an auteur piece. His Tony, of course, comes to realise that this isn't the liberating "superpower" he thought it was, and begins to act more kindly to people, so it's a redemption arc, which absolves him.

The problem with this is that you are encouraged to side with Tony when he's acting monstrously towards those around him. I'm sure Gervais would disagree. But if this isn't the case, why does Tony win all the arguments he starts, in a way intended to satisfy us? Time and again he and his scabrous worldview come out on top: he sends himself a postcard telling the postman to stop reading his mail; he takes down a chugger, piercing his holier-than-thou position of concern for the charity; he argues with a waitress who won't serve him a kids' meal and gets round it by ordering two meals for the kid and eating one himself, making sure she sees him doing it.

This last one, he says in the O'Brien interview, is something that happened to him in real life and that he meekly accepted, so presumably this is his fantasy of how he wishes he'd reacted. We aren't being told that Tony's behaviour is wrong and needs to be corrected; this is a narrative of triumph. Where this is most transparent is where he uses the character to flat-out make the points Gervais is most proud of, like Aaron Sorkin without the dexterity. Diane Morgan's Kath, who exists as a slightly lonely but harmless figure for him to victimise, suddenly says she believes in God so that Tony can trot out his creator's favourite argument for atheism: there are hundreds of gods, so I only believe in one fewer than you. If you're into arguing online with the faithful it's a good line, but it comes copied and pasted from Gervais's Twitter profile straight into the script, delivered by a man we're not supposed to be siding with.

When he is eventually redeemed, it's completely unearned. This was a problem in David Brent: Life on the Road too, in which as substitute for Brent changing and earning the respect of those around him, the characters simply started saying to camera: "Actually, he's a nice guy; I really like him." Similarly here, people abruptly begin to tell him how kind and funny he is, despite his having done nothing but abuse them. Redemption doesn't come easily to him when he writes solo: character growth itself is skipped, and you're just told he's now a good person. 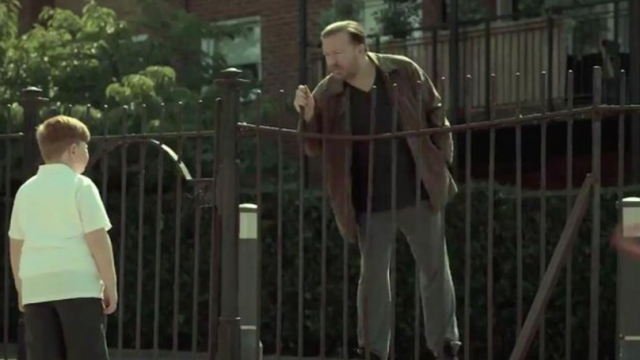 
I suppose I'd be more comfortable with his defence that he never punches down if the attempt didn't end up in so much friendly fire. He claims on the podcast that Tony is sympathetic to the vulnerable throughout: his graveyard buddy Anne, his nephew, the sex worker, the heroin addict. (The last two of which seem incongruous in such a nice sleepy market town, as does a hipster clothing store with a DJ.) But this ignores the times when he isn't: the waitress is a minimum-wage worker just enforcing the rules she's been told to. So is the chugger. The kid in the playground is fat and ginger, and we're supposed to delight in Tony telling him this. Kath is specifically set up as a lonely, awkward figure just trying to make friends, and he picks on her constantly. These are all vulnerable, low-status figures. The "punching up" argument only works if the fist never turns towards the ground.

The end result is a series that attempts to explore some big truths about the human condition, but fails because these themes are rinsed in a bile that structurally cannot come from anywhere other than its author's own liver. The conflict it stirs in me is that I don't believe Gervais is a hateful person, just that his work exists as a justification for him to say hateful things, and that he isn't skilled enough on his own to create a construct to allow this. It's as if, having written David Brent, a wonderfully vulnerable character who caused awkward situations through an overeagerness to please, he's now seized upon the wrong part of that tension – the awkwardness itself – to create comedy. A character actively trying to bring about discomfort through nastiness is not the same thing at all.