Review: Always Be My Maybe is almost definitely an okay film 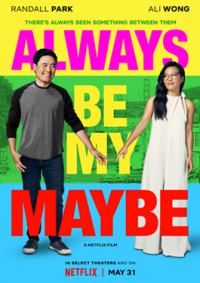 I've got some good news and some bad news. The good news is that Keanu Reeves' turn in Always Be My Maybe is as funny as you'd hoped, not just living up to his much-memed slow motion entrance in the trailer, but hanging around for a few more scenes and becoming part of the plot like he's some sort of jobbing actor or something. The bad news is most of everything else.


Sorry if that intro isn't what you wanted to hear, but it does come with a caveat: in an accidental test of short term rewatchability I've managed to watch Always Be My Maybe twice in the last couple of days. The first time was on my own and I was quite taken by the film. But then before I could begin writing a review my partner stuck it on again, and to avoid upsetting her I went along with the pretence it was my first viewing. She reads my reviews so I'm either in big trouble later, or she'll laugh it off and put it down to my lovable roguish nature. Oh sweet Christ I'm so boned.

Anyway, enough of my domestic woes. There's been talk the last few years about the death of the rom-com. They've not gone anywhere, they just got played out a bit in the '80s and '90s before special effects came along to rescue us from the drudgery of human relationships. But we're seeing a bit of a resurgence as of late in the fallout of the Me Too movement and its effect on diversity and representation - like a reminder Hollywood doesn't revolve around the egos and penises of middle-aged white Tom Cruise men. 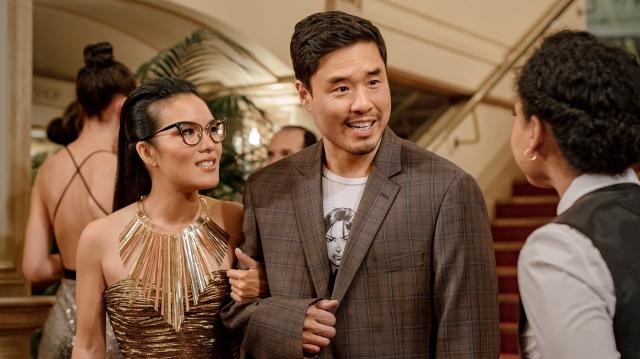 
Always Be My Maybe is notable for being a Western romantic comedy centered on two Asian characters - Vietnamese Sasha (Ali Wong) and Korean Marcus (Randall Park). Sasha and Marcus grew up together in San Francisco, sharing innocent youthful adventures and their separate cultures until eventually, inevitably, they shared the backseat of Marcus' car (with their clothes off having sex in case that wasn't clear). Good friendships don't often make for good romances though, and the ensuing awkwardness sees Sasha and Marcus drift apart.

Jump forward nearly twenty years and Sasha is now a successful restaurateur engaged to millionaire entrepreneur Brendan Choi (Daniel Dae Kim) - who wants to take her brand global, but not until he's closed a business deal, and another venture takes off, and the wedding is shifted to accommodate all of this *record scratch* Wait, what? Sasha realises the love she's found is akin to being a cog in someone else's machine and calls a halt to proceedings, pitching up back in San Fran. Marcus still lives with his dad, smoking weed, and inhabiting the same dive bars with his brilliantly-named (and quite excellent thanks to Dan the Automator's input) band 'Hello Peril'.

By circumstance and a little match-making the pair come together again, and the prospect of reviving a long-forgotten romance is suddenly on the cards: but will the years and their vastly different lifestyles be an obstacle to rekindling what was only ever a brief spark? The roots of Always By My Maybe lie in Ali Wong and Randall Park's friendship going back to the '90s. Wong has been quoted as saying she wanted to make their version of When Harry Met Sally. Which is a noble idea, but nothing close to the near-philosophical musings on life, loss, belonging and contentment is found here.

My take is clouded due to watching it twice in quick succession and finding its initial charms had worn off. That's probably unfair - films don't necessarily have to be rewatchable, or be expected to hold up to scrutiny under multiple viewings at all. Like all relationships, however, when they come to an end what you take with you are the memories and maybe that novelty toilet roll holder you thought was funny. The film is fine, really - it's funny and sweet, and Randall Park raps good. My judgement is compromised. So I'm sorry, Always Be My Maybe - it's not you, it's me.