Review: Avengement roundhouse kicks the dictionary in the throat 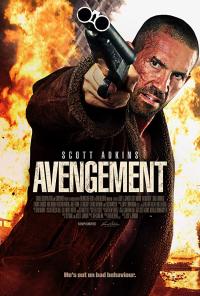 The most tense pub situation I've ever been in was on a Sunday morning in a Wetherspoons, in Bristol. I'd gone there for breakfast despite the owner's recent stance on Brexit; the promise of free coffee refills enough to overcome any amount of bigotry. I joined the queue at the self-serve machine and edged my way forward, but two people shy of my goal disaster struck: the machine had stopped working. The air turned immediately oppressive, and remained so for several minutes until an extremely nervous man came to put new beans in the machine under the watchful, angry, twitchy eyes of the entire pub. It's no exaggeration to say if he'd spilled a single bean the place would have erupted in an orgy of savage violence. So in a way I feel like I have already lived through the events of Avengement, aka the sweariest fucking film ever cunting made.


Every so often I find myself revisiting the fascinating world of Scott Adkins. He's a likeable screen presence, and has been fortunate enough besides EastEnders and Doctors episodes - and even the odd Marvel movie - to have nurtured an early career in the East; cutting his teeth with the cream of Asian martial arts filmmaking talent. Now nearing his mid-40s Adkins appears to be adopting a big brother-like position in the local kick flick market, serving as producer to a run of Direct-to-Asda B-Movies that embody the same high energy, crowd-pleasing spirit of his formative roles. But that doesn't mean Adkins is slowing down.

In Avengement, Adkins plays Cain Burgess - a reluctant criminal forced to toughen up after finding himself behind bars, the foil in a scheme concocted by his loan shark brother, Lincoln (Craig Fairbrass). To make things worse instead of using his time inside to think about the actions that may have led to his current predicament, Cain spends it fending off ambushes from a non-stop stream of goons, sent to kill him by an unknown puppet master. Eventually the pummellings reduce Cain to an unfeeling shell, and upon seizing a fluke chance to escape the slammer he sets off with only two things on his mind: MARTIAL ARTS and REVENGE. Or AVENGE. Some kind of venge anyway. 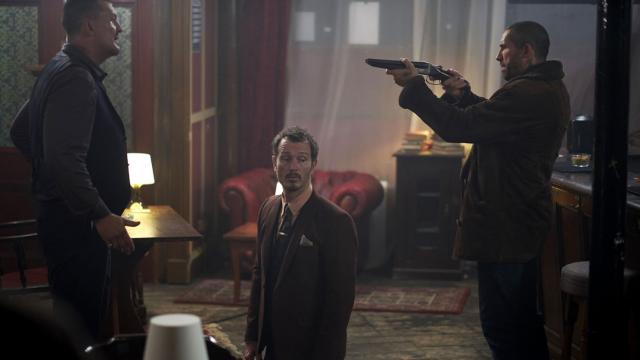 
Cain heads for Lincoln's pub where he hopes his brother can shed some light on who the devil might be out to kill him, and to some extent why. But mostly who, so Cain can smash a pint glass over their head and make them eat the shards and then shit out the shards and eat them again, I imagine, such is his primal urge for satisfaction. Lincoln is out sharking some loans though, so Cain takes the occupants of the pub - including Thomas Turgoose and that old stalwart of the London gangster movie, Nick Moran - hostage until he arrives.

It's here we find the backbone of the film - a one-locationer of sorts - where the tension is ramped up with sporadic bursts of violence as Cain attempts to retain control. But it's the dictionary that takes the real punishment, as the hapless punters express their displeasure in typically colourful East End style. At a conservative estimate I reckon the word 'fuck' is uttered about two hundred times during the film. And sure swearing is cool, but have you ever considered there's an upper limit to how cool you can be? 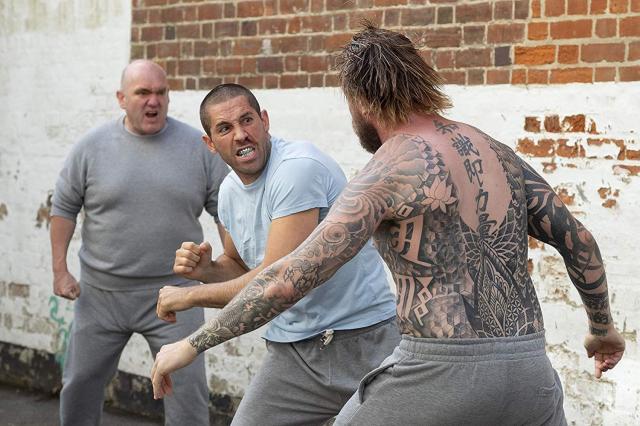 
Things aren't as simple as a bunch of cockney types exchanging fuck yous in a boozer, however. Throughout the ordeal Cain relates his return via flashback, gradually piecing together a situation that isn't as straight-forward as it first appears. This clever device gives us just enough information to guess at what's really going on in Cain's head, without revealing whether he's truly cracked or if there's something else lurking beneath his mangled exterior. And as it turns out Cain is a complex individual - sure he's got his revenge to get, but a plot detail involving his brother's loan shark business shows that more is on the table than his own health and wellbeing.

It's rare that a brawler should have an almost altruistic moral streak, and it's a welcome one that elevates Avengement above the standard London East End gangster fare. The switch up from petty criminal to 'doomed man seeking redemption' harks back to classic tales of conflicted warriors (and indeed writer-director Jesse V. Johnson cites the 1962 Japanese Samurai film Harakiri as an inspiration), and while Avengement isn't exactly a classic in any regard, it's a step in the right direction for a new breed of British thumpfests that - if Adkins can wield his sensibilities correctly - may just begin to rival their Eastern origins.

More:  Scott Adkins  Craig Fairbrass  Nick Moran  Thomas Turgoose  Jesse V Johnson  Stu Small  Netflix
Follow us on Twitter @The_Shiznit for more fun features, film reviews and occasional commentary on what the best type of crisps are.
We are using Patreon to cover our hosting fees. So please consider chucking a few digital pennies our way by clicking on this link. Thanks!