Review: Behind the Curve lets us gawp but doesn't offer any insight 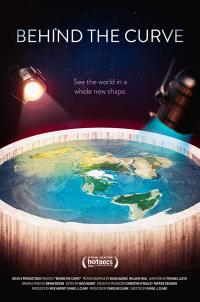 It's so sad to hear about Piers Morgan. Oh, nothing's happened to him. I mean just generally whenever he pops up it makes me feel sad that an adult would cultivate mock outrage in pursuit of attention. We should cut him off so he can disappear forever, but he's harmless really - a fart in the wind - and everyone sees the desperation in his tiny haunted eyes. And he's a coward. To properly grab people's attention nowadays you have to go down the alt-right route like Hopkins and Milo, baring your wretched soul fully in a self-immolating endgame; not have a dig at vegan pastries from the safe space of a colourful sofa. He's a rank amateur. What does this have to do with flat earthers? Well, they're the same thing as Morgan aren't they? Poor deluded fuckers confusing passing glances with validation, convinced they're part of the fabric of reality, when really they're touching cloth.


If you've never heard of 'flat earth theory' - firstly, I am so envious of you - secondly, all you have to know is there are groups of people dotted around the globe who believe science is wrong, space travel is a fallacy propagated by The Evil Lying Lizard Government, and the earth is in fact a flat plane we move about on up, down, left, right like in ToeJam & Earl for the SNES. Naturally you have questions, such as what happens when you reach the edge, or where do the sun and moon go? Well they've got an answer for everything you stupid idiot, cuh! But we'll get to that.

Mercifully, Daniel J. Clark's Behind the Curve is not a pro-flat earth documentary, so you can take a deep breath and let the red mist subside. Even the title hints at there being something slow or backwards about flat earthers. And while that's not a harsh assessment considering the intensity with which they hold onto beliefs that are 100% refutable, it's not a helpful one. Flat earthers are all around us - serving us coffee, driving our buses, teaching our children in schools - they are normal people with the same everyday concerns you and I have, except they've fallen into a trap that is a side effect of modern online life. 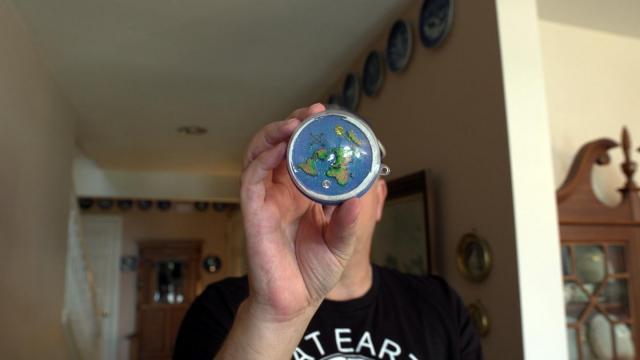 We largely follow Mark Sargent, a leading voice in the flat earth community, in the build up to the first official flat earth conference where he is due to deliver a merch-shifting keynote. The conference is scheduled to coincide with an eclipse over the US mainland - a detail not lost on Mark, who has an impishly ironic sense of humour. Sargent spends his days recording podcasts and videos spreading the flat earth message for his growing audience. Interspersed with this we meet the more outlandish characters of the scene, ranging from artists inspired by the image of a big disc flying through space, to plain old violent whackjobs trying to usurp Mark as King of the Flat Earth. They're a nutty lot.

And then we have Patricia Steere. Oh, lovely, lovely Pat. Mark regularly joins Patricia on her show, and is so soppily in love with her you forget for a moment the total bollocks that has brought them together in the first place. Patricia is a one-woman bullshit factory. Her image is carefully constructed to pander to her audience of lonely, gullible men: tight clothes but not too revealing; flirty yet distant; ready for a selfie in an instant. She's the belle of flat earthism, but could snap your neck with a scowl. Mark, in his cap, relaxed jeans and 'Flat Earth Army' t-shirt, doesn't stand a chance.

This mono-entanglement forms an endearingly lopsided emotional core, as the pair meet in person to go on a series of quasi-dates in the run up to Mark's big day. In a sequence that wouldn't be out of place in a Christopher Guest mockumentary they share the eclipse together, hang out watching movies, and have fun shouting "Earth is flat!" in a NASA rocket museum. Alas romance is not on the cards for Mark, who openly discusses his chances with Patricia, unaware he is at a point so far in the friendzone no light can escape. Not that Mark would take any advice to give up the ghost on board anyway. He's not one for facts. 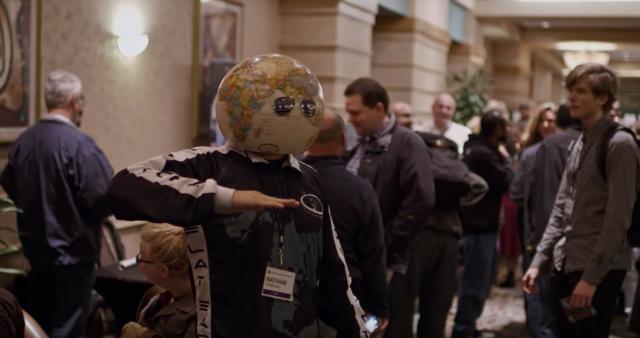 As easy as it is to have a chuckle, it's worth remembering that none of this is good. Mark and Patricia are at the forefront of a movement spreading anti-science dogma - flat earth is a belief system after all, rather than evidence-based, because if they listened to evidence then... yeah - in return for fame and money, which are ostensibly delivered through online clicks and impressions. Whether they believe the lies or not, there's cash to be made in duping people looking to belong somewhere, and flat earthism is a cottage industry riddled with competition, meaning if you want to stay on top you have to double down on the lies, upping the ferocity while presenting even more outrageous claims.

So how did we get stuck in this perpetual spiral forever scraping the bottom of the infinite lie barrel? YouTube has a lot to answer for. Their recommendation engine has been flagged recently as guiding users down increasingly biased funnels as it tries to figure out what to serve next. For example, if you search for funny animal videos, then click on a cuddly dog video, YouTube will suggest more videos of dogs because it has no idea how to curate different animals into your personalised listings. Now replace cuddly dogs with anti-vaxxers. Or holocaust deniers. Or Sandy Hook false flag conspiracists. Suddenly you're stuck in an echo chamber, and it turns out an alarming number of people are displaced enough socially, or otherwise maligned, to be receptive to the friendly faces leaning into their screens telling them the most insane falsehoods as fact.

I've always joked the only thing better than a good conspiracy is a bad one, but I think Behind the Curve has broken me. The subjects are hopelessly blinkered and need either a good talking to or, in the worst cases, intervention and rehabilitation. To continue laughing at them is to ignore the reasons why they - or anyone - could gravitate towards resisting a factual world. There's something fundamentally wrong with our culture that is letting a good portion of people down somehow, and sneering isn't going to reverse the damage already caused. We should be reaching out, not pointing and laughing, because whatever shape the earth is we're all stuck on it together.

More:  Documentary  Daniel J Clark  Mark Sargent  Patricia Steere  Flat Earth  Netflix
Follow us on Twitter @The_Shiznit for more fun features, film reviews and occasional commentary on what the best type of crisps are.
We are using Patreon to cover our hosting fees. So please consider chucking a few digital pennies our way by clicking on this link. Thanks!