Review: Between Two Ferns: The Movie justifies its own existence... just 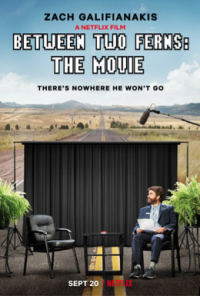 There are a few hurdles to clear before getting on board with Between Two Ferns: The Movie. Firstly, the idea of a fairly one-note sketch show stretched to feature length is inevitably going to require padding. Secondly, stars playing wacky exaggerated versions of themselves gets tedious real quick. And thirdly, celebrities being pranked yet are clearly in on the joke because they'd never have agreed to appear otherwise is a bit, y'know, shit. I guess if you're able to separate yourself by a few degrees then you stand a chance of being entertained by the quasi-meta comedy on offer. But if you can't do that then, well, you're screwed really. It's hard work enjoying films these days.


I think this was intended as a fond farewell - closure of sorts - to a series that only ever existed for the simple joy of watching a willing celebrity cringe as Zach Galifianakis asks them increasingly embarrassing questions. And to bid goodbye we're leaving the confines of the studio behind and going full narrative. The challenge then is how to retrofit backstory to a format that was never meant to have any story at all, which hangs a lot of faith on an audience tuning in that probably weren't all that curious to find out what Galifianakis' rude alter-ego gets up to when not sitting between the plants.

The "plot" (extreme air quotes) driving Between Two Ferns: The Movie sees Galifianakis and his crew - producer Carol (Lauren Lapkus), camera operator Cam (Ryan Gaul) and boom operator "Boom Boom" (Jiavani Linayao) - on a road trip to interview celebrities at home after their regular public access studio is destroyed in a flood. Will Ferrell turns up too, doing that thing he does which I will never understand, as Galifianakis' boss, offering him a shot at primetime if he can restore Funny or Die's traffic which had been relying on Ferns.

Maybe shouting the joke a third time will make it funny?


It's basically an excuse for an extended version of the sketch show, but if you were hoping for a big swansong then I'm sorry to say it's a far cry from the days when they scored Barack Obama or Hillary Clinton. The movie churns up Jon Hamm, Matthew McConaughey, Brie Larson - people you'd expect to have a sense of humour about their status, rendering the skits tame. For example, did you know Benedict Cumberbatch has a funny name? Of course you do, he's a ridiculous posh fop, they all have funny names. But here's a shock: he knows his own name sounds funny too! And so on.

Galifianakis has stated that the marks don't know what's coming, but it's hard to imagine if they did anything genuinely offensive the footage would stay in. Consequently there's an air of restraint to proceedings. But still, it's a unique enough position to be in that Galifianakis can call up his film star buddies and they go hang out for the day, larking about like you'd imagine they do - I just wish the playfulness of an end credits blooper reel had made it into the film itself. When they do attempt jokes rather than trying to get rises - such as Paul Rudd's fun self-deprecating section, during which he states "I'm not a practising Jew... I've perfected it" - it works so much better. 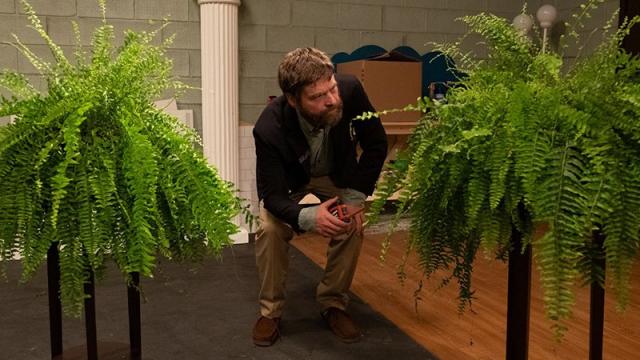 Literally the title of the show


I'm being unfairly overly negative. Between Two Ferns: The Movie is not a disaster by any means, and I found myself chuckling often enough to justify its claims of being a comedy. Galifianakis is always watchable, and it seems like he and co-writer Scott Aukerman genuinely wanted to inject some pathos into the Ferns-verse. And they very nearly succeed in fleshing out a one-note joke to a character worthy of leading an actual proper film - although this comes at the cost of watering down the original USP of the show.

So is that it for Between Two Ferns? I was surprised to learn during doing research for this review that despite a handful of specials, the show by and large ended in 2013, and only numbered about twenty episodes in total. Free of plot the short instalments serve their purpose of being fun snippets to watch on the go - and more importantly share - and have made their mark culturally. But we've moved on and insulting celebrities is something any dickhead can do on Twitter these days. If Galifianakis does ever want to get back into the shock game it looks like his best route is to resurrect the Hangover series with director *checks notes* Todd Phillips?

More:  Zach Galifianakis  Lauren Lapkus  Ryan Gaul  Jiavani Linayao  Scott Aukerman
Follow us on Twitter @The_Shiznit for more fun features, film reviews and occasional commentary on what the best type of crisps are.
We are using Patreon to cover our hosting fees. So please consider chucking a few digital pennies our way by clicking on this link. Thanks!