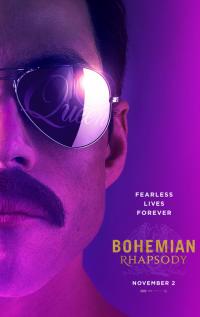 Watching Bohemian Rhapsody is a bit like seeing Queen perform with Adam Lambert: yeah, the songs are all good, but at the back of your mind you know you're not getting the real deal. Bryan Singer/Dexter Fletcher's biopic is the sanitised retelling of Queen that leaves out all the good stuff in order to be family friendly. Where are the dwarves with trays of cocaine on their heads? The nights out with Kenny Everett and Princess Di in drag? Naked renditions of We Are The Champions? Can anybody find me something to love?


As an excuse to dig into Queen's greatest hits, Bo Rap ticks all boxes, although you have to wait until the very end to hear 'Don't Stop Me Now' which is downright criminal. But while the near-perfect renditions of live performances are en pointe, what we're really crying out for is an unflinching behind the scenes look at one of history's more charismatic performers. We're introduced to Freddie as a baggage handler at Heathrow, marvelling at the exotic stickers on suitcases, before coincidentally bumping into Roger Taylor (Ben Hardy) and Brian May (Gwylim Lee) after they lose their original lead singer, and then suddenly... Queen. Not much is given to Freddie's life before, with scant detail about his growing up: this is the story of Queen, with the word "family" said so often it could fit in nicely into the Fast and the Furious franchise if it had a few more cars.

Screenwriter Anthony McCarten frames the band's rise to fame within their blistering performance at Live Aid which opens and closes the film, but lets a series of contrived happenstances tell the tale of what is nothing more than a simple road-to-fortune movie. It all just feels slightly too convenient that every major moment in Queen's history is perfectly pat. For example, when May wants to create a song "that the audience can play" (stomp, stomp, clap), or a bit of pushing and shoving leads to 'Another One Bites The Dust'. Even more unforgivable is that all of Mercury's emotional loose ends are neatly tied up on the way to Wembley, although a lazy third act is elevated by a carbon copy of nearly the entire famous set at the end. 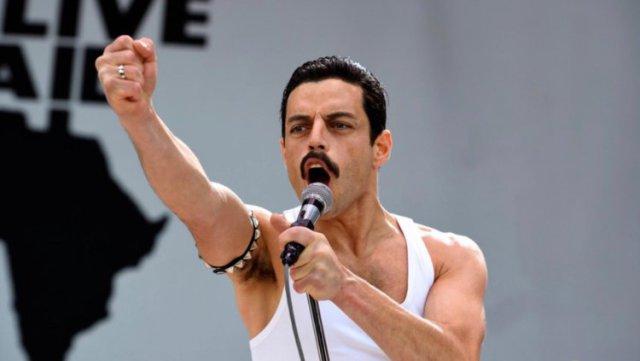 "We intend, to the best of our ability, to rock and/or roll you, you being the audience!"


For a film that plays around with timelines (Mercury's solo album came out the same year as Live Aid, whereas Singer/Fletcher suggest this preceded a temporary break which put their participation in the concert in jeopardy), it tries to be staggeringly self-aware. Mike Myers is cast as the EMI executive who turned down Bohemian Rhapsody, which leads to a Wayne's World reference that feels unnecessary. There are even points where May is given a platform to defend his Louis XIV hairdo, and Taylor gets to explain the process behind 'I Love My Car'.

Both May and Taylor contributed to the film and serve as producers, so perhaps it's understandable they want to play down the wilder aspects of their past. May is portrayed as the sensitive, understanding one, whilst it's heavily hinted that Taylor


While the actors are fairly good lookalikes, it's lucky that Malek goes full-method and really inhabits his role as Freddie in the film's other saving grace, bringing a multifaceted performance to what is a one-dimensional rendering of the beloved showman. Giving a gallant effort against a mouthful of cumbersome prosthetic teeth, he perfectly nails Mercury's posturing and posing in a galvanizing display, and you literally cannot take your eyes off him whenever he appears on screen, especially when in a monochrome jumpsuit.

"
"
Bohemian Rhapsody is a slightly romanticised version of Freddie's legacy
Around the time of the first trailer release, much was made about the fear the biopic would dampen down the facts that Freddie was gay, not to mention his AIDS diagnosis, and to be fair it does cover these aspects, albeit with a light touch. But this is the stuff we knew; what's more intriguing was what was going on behind closed doors. The remaining members of Queen, as well as Mary and his lover Jim Hutton, are fiercely protective of Freddie's legacy and so it's this slightly romanticised version which is brought to the screen. Instead of the brazen gay rock and roll hero, who would spring about the stage, shouting out "bite it hard, baby", we're given the slimmed-down, more palatable Freddie who's just a harmless eccentric. And maybe he was, but his portrayal seems at odds with the guy who once said, "I'm just an old slag who gets up every morning, scratches his head and wonders who he wants to fuck."

It's no surprise though that the best bit about Bo Rap is Queen's music, playing banger after banger, and the recreation of the Live Aid set (or "the concert for the Africans") is almost as breathtaking as the real thing. That, and Malek, is almost enough to rock you, but as deep insight into a complicated and beloved superstar, it's definitely not a kind of magic.

Additional observations
- One thing I did learn was that Kenny Everett was the first person to play Bohemian Rhapsody on the radio. That's like learning Dale Winton was the first person to play Whole Lotta Love.
- Singer was fired after clashing with his actors and not turning up to set, but still claims the director's credit. Brought in at the last moment, Dexter Fletcher's contribution seems to be the cheesy graphics which he last used in Eddie The Eagle.
- In the official poster, the reflection of 'Queen' in Freddie's glasses means he would be looking at it the wrong way round and it pisses me off more than Ryan Gosling's hand on the poster for La La Land.
More:  Bohemian Rhapsody  Bryan Singer  Dexter Fletcher  Rami Malek  Joseph Mazzello  Ben Hardy  Gwylim Lee  Mike Myers  Aiden Gillen  Queen
Follow us on Twitter @The_Shiznit for more fun features, film reviews and occasional commentary on what the best type of crisps are.
We are using Patreon to cover our hosting fees. So please consider chucking a few digital pennies our way by clicking on this link. Thanks!