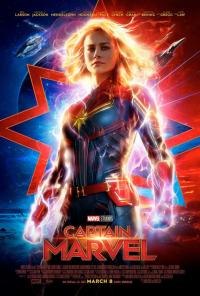 It seems strange now to consider any new Marvel movie to be a risk. After 20 films, each amassing box office receipts equal to the size of entire national economies, surely a new instalment of the MCU can only ever be a sure thing at this stage? And yet, here we are, with a film that is about risky as Marvel gets now; not because this is its first female-fronted film (Wonder Woman has kapowed that glass ceiling already), but because we are dealing with a character most won’t know, with abilities that are supposed to be more powerful than anything we have ever seen before, played by a still relatively obscure lead actress. Oh and there’s that little thing of presenting her as the Endgame saviour of the Infinity War. Have no doubt, Marvel is rolling the dice here, even if they are safely loaded.


The risk lies in the lack of context for this character to exist. Who is Captain Marvel? What does she do? Who is she fighting? Even after seeing the film, none of those questions are easy to answer, least of all the first one. Those coming to the movie pre-armed with comics knowledge might be better prepared - Captain Marvel is the latest iteration of Ms Marvel, who got her powers from Kree alien Mar-vell, but she’s actually also human Carol Danvers and definitely NOT the Captain Marvel from the forthcoming Shazam! movie, etc - but to almost everyone else it just seems like Marvel needed a female hero fast and spent all of twenty minutes creating her from scratch.

It’s apt then that her own identity crisis is centre stage in this film. The film begins with Brie Larson’s superpowered warrior-hero living on the Kree-populated planet Hala being trained for Star Force military missions by mentor Jude Law. She has a wry sense of humour, a renegade attitude, some glowing fists and some dreams of some possible past memories that she doesn’t seem at all interested in investigating. With the Kree engaged in a bitter intergalactic conflict with the shape-shifting Skrulls, she soon finds herself on Earth and, as the plot expertly unravels to explore hidden depths to her character, she uncovers the stunning revelations that those memories are actual memories and her glowing fists are also important somehow. 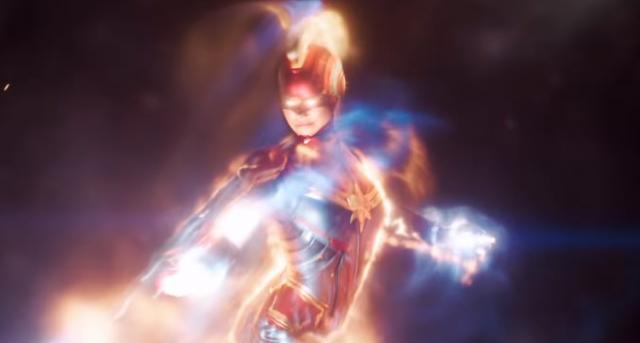 It's probably nothing though.


After an initial section that feels more serious than the film eventually becomes, the familiar glib humour and colourful fun of Marvel’s template sets in and what felt more like a space epic thankfully evolves into a Guardians-style space adventure. There is a sense here though that the MCU formula is now being relied upon to paper over some of the cracks in the storytelling. The shorthand style of throwing the audience into the deep end and bombarding them with distractions results in some quiet, nagging questions throughout. For instance, our enigmatic lead doesn’t seem all that active in discovering her own backstory until she stumbles on to some clues to it, so where did she think she came from? Don’t worry about it, here’s a joke about the 90s. If she’s obviously not Kree-born, what does she remember about getting to this planet? Why is she happy to just be trained and used as a weapon against the Skrulls? It’s not important, here’s a creatively choreographed fight scene. Why does Skrull leader Talos talk with a gruff part-Cockney-part-Australian accent? Just go with it, it’s fun!

"
"
A CGI-young Jackson acts and emotes without an ounce of visible special effect on him
As ever with Marvel movies though, on the whole it works. The momentum of the gags and the action, balanced against enjoyable character moments, makes up for the lack of detail and questionable logic. Key to the film’s success in this way is Brie Larson’s charismatic personality in the lead role, enjoyably aloof when she’s not mischievously breaking rules. And as Carol Danvers learns more about herself, Larson lends scenes of literal empowerment a heart-bursting sense of wonder and defiance.

Elsewhere Samuel L Jackson pitches his performance as a more wet-behind-the-ears Fury perfectly, playing resourceful fish-out-of-water in a way that is far removed from the SHIELD director we already know, but still seems to track well with how you imagine that character evolving between films. And if you ever thought that Marvel’s de-aging technology in previous scenes was ‘98% there’, then this is the film that locks it down as officially perfect. A CGI-young Jackson acts and emotes without an ounce of visible special effect on him. 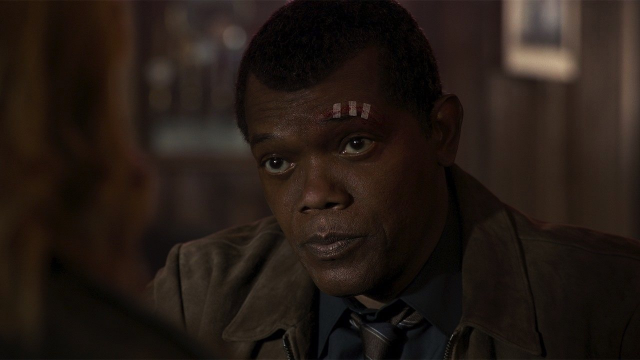 This scene was actually filmed with just a tennis ball on a stick with a plaster on it.


The same can’t be said for Ben Mendelsohn who is buried under heavy prosthetics as the Skrull baddie, but he still somehow manages to be the funniest element in the movie. Providing dry, down-to-earth responses that sound exactly like Vinnie Jones trying to make sense of this film’s script, his Talos is an odd curio in the film and a delightful far cry from the likes of Thor: The Dark World’s Malevolent Keith, to whom he most closely resembles.

The humour in these moments is more vital than it should be because elsewhere the film relies far too heavily on its 90s setting for quick reference jokes. An initial crash landing in a Blockbusters store is a great way to set the period, but very quickly the sight of a Gameboy here, or a CD-ROM there, is established as a replacement for an actual gag. It’s particularly noticeable because, outside of these pointed moments and a soundtrack made up of songs by female-fronted 90s bands that are just a little too on the nose, the film does nothing to make you believe it is set in the 90s. After all, it mostly takes place in space or a dusty town. As it stands, the period seems much more like a cynical attempt to mimic the success of Guardians Of The Galaxy only with a different set of tunes and different generation’s nostalgia. 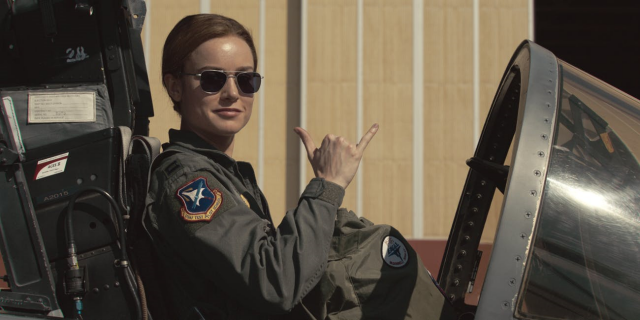 
Because judging a Marvel movie always, inevitably, has to end with some kind of comparison or ranking placement with the rest of the franchise, it has to be said that, overall, this film falls into the more forgettable end of the spectrum. Aside from the most iconic moment in the film - the sight of a fully-powered Captain Marvel soaring through every obstacle in her way - there isn’t much here to latch on to for years to come. The lack of a clear antagonist, including the entirely superfluous reintroduction of Lee Pace’s Ronan The Accuser, doesn’t help matters, nor does the lack of a clear sense of purpose for the character beyond establishing her own powers.

"
"
More than ever, the MCU feels in desperate need of a shake up
To put it another way, this is more Doctor Strange or Ant-Man & The Wasp than Iron Man 3 or Thor Ragnarök. It’s a crude way of establishing quality of a film like this, by essentially proving its value only against the other instalments in its franchise, but this is how we view the MCU these days, isn’t it? Captain Marvel is ultimately lots of fun, which is exactly as everyone would expect, but it’s not going to set the world alight as something especially ground-breaking.

It also says something that one surprise plot point and both credit scenes were all correctly predicted by those I was with just before the film started at my screening. So, while Captain Marvel is a hugely enjoyable cinematic experience, it’s also an unsurprising one, and all this does is build further anticipation for Avengers: Endgame. Not just because there’s excitement for seeing how the rest of that story plays out, but because now, more than ever, the MCU feels in desperate need of a shake up.

Additional observations:
- There's some interesting narrative stuff at the start of the film that seems to defy the usual structure of superhero - particularly origin - story, right up until a scene in which Carol Danvers is experiencing her own memories while someone commentates over them. It feels like a fresh approach for the script, but then everything after this follows a very standard plot, so the only conclusion is that this sense of inventiveness is purely accidental.
- There is a reveal towards the end of this film that will cause you to mentally track continuity over several other MCU films to make sure it makes sense.
- The Stan Lee cameo is remarkable for the reference it makes to another movie. I'm pretty sure though that the first time you see him, hidden behind the pages of a book, it's actually just a really poor double.
- Some of the 90s references really are distracting, particularly for my generation. I spent a full five minutes wondering if the use of a Smashing Pumpkins poster and a Nirvana song were actually appropriate or not. Being featured in a mainstream movie about aliens and superheroes doesn't sound like the kind of thing that Kurt Cobain would have signed up for, does it?
- Cats are brilliant. There should be more films that have cats in them. That is all.
More:  Captain Marvel  Marvel  Ryan Fleck  Anna Boden  Brie Larson  Gemma Chan  Jude Law  Samuel L Jackson
Follow us on Twitter @The_Shiznit for more fun features, film reviews and occasional commentary on what the best type of crisps are.
We are using Patreon to cover our hosting fees. So please consider chucking a few digital pennies our way by clicking on this link. Thanks!