GRIM AND BEAR IT

If you hadn’t realised it from the twee, plinky-plonky marketing, Christopher Robin is a movie aimed more at large adult sons than it is small children - the kind of film that insists the key to happiness and the secret to being a better man, husband and father, is to be more childlike. That’s kind of Disney’s whole thing right now; the studio seems intent on arresting the development of adults around the world with superhero universes and space sagas and glitter-flecked versions of the movies they loved as children. But hey, if there’s any character that’s going to cut through corporate cynicism, it’s Winnie the Pooh, a bear after my own heart, living my trouserless dream, who is so loveable he could tell me he just disembowelled and stuffed the other residents of the Hundred Acre Wood and I’d still let him bumble around my house, stuffing his adorable face with £13-a-jar Manuka.


It’s basically Hook. There’s your pitch meeting in a nutshell: it’s Hook, but with Winnie the Pooh instead of Peter Pan, and Ewan McGregor instead of Robin Williams, and a suicidal donkey instead of Tinker Bell. There’s even a touch of the original and unused pitch for Monsters, Inc., wherein a man was forced to confront figments of his childhood imagination in order to truly grow up. It’s new ground for Pooh and friends, taking them out of their cute little comfort zone, but it’s not even close to an original idea.

Christopher Robin is an uncomplicated movie that makes an uncomplicated point: being a grown-up sucks ass, and kids don’t know how lucky they are to live in their own little worlds. McGregor, as the adult Christopher Robin, now father to a young daughter and working at a luggage manufacturer, has left the world of Pooh behind and instead lives in a world of shit: a crappy job, a horrid boss, a wife and kid he never sees and a fear that, at any moment, the Hun may reorganise and the world will once again be plunged into bloody war. That last one is assumed on my part, but then I never thought I’d see a Winnie the Pooh movie in which Christopher Robin, under heavy fire from the Nazis, screams “WHERE ARE MY REINFORCEMENTS?” while his friends are blown to bits. Being forever young seeming more and more like a plausible option for old Private Robin right about now. 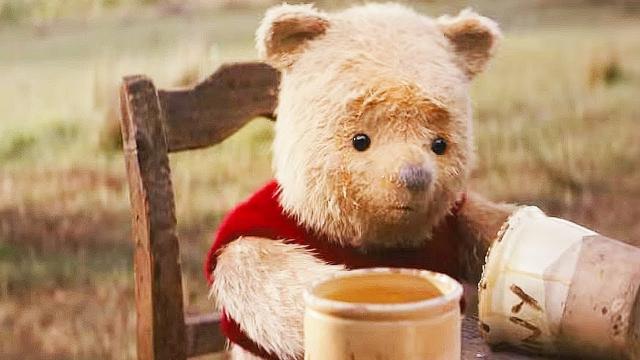 Pooh himself never quite got over Vietnam.


You could write a very boring essay on the various interpretations of the characters of the cinematic Poohniverse - on the importance of creativity and the power of fantasy and the freedom of imagination and the characters as fragments of Christopher Robin’s crazed psyche - and though the movie half-heartedly subscribed to (almost) all those viewpoints, it does place Pooh and friends rather definitively in the real world. As in, Winnie the Pooh is real. The Hundred Acre Wood is a real place, that Robin accessed through a real tree stump. Other people can see the animals walking, talking and moving. Most frightening of all is when Pooh is forced to “play nap time” and go limp so as to avoid detection, and all the life drains from his body, his button eyes blackened and dead. I’m not sure I am ready for my world and Pooh’s world to be one just yet, it’s just too intense.

"
"
Everything right with Christopher Robin is down to Jim Cummings
I cannot overstate exactly how much of what is right with Christopher Robin is down to Jim Cummings aka the voice of Pooh. Maybe it’s the real world makeover, but this Pooh seems extremely “pre-loved”: a bit scraggier round the edges, a bit more cumbersome, the voice a touch more weary and cracked. Brace yourself for the scene in which lonely Pooh stares at the door to Christopher Robin’s world, waiting for his best friend in the whole world to return like a dog waiting for his master, presumably for decades. Prepare yourself for the scene in which Pooh - holding a red balloon, looking inquisitively at the angry adult man who has long since outgrown him - says apologetically: “Have you let me go, Christopher Robin?” Cummings brings the bear of little brain to life, and the heart cannot help but flutter in his presence: I have never wanted to cuddle anything more in my entire life. In this respect at least, I remain a child and I DON’T CARE WHO KNOWS IT. 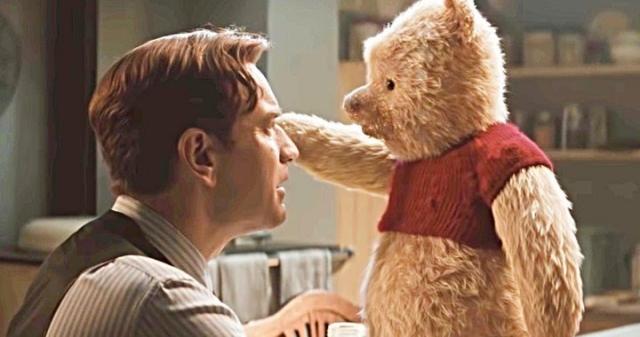 Cuddle him. CUDDLE HIM NOW.


It’s an odd movie of sorts, in that it’s not really very kid friendly (see the aforementioned World War II flashbacks, and the looming threat of a PowerPoint presentation as the main source of drama) and the dry, adult stuff isn’t particularly sophisticated. The inevitable final scene, where Robin channels the homely wisdom of Pooh to solve all of his personal and professional problems in one predictable epiphany, doesn’t feel particularly satisfying - perhaps it speaks volumes that I was watching the movie expecting an actual answer to his boring workplace bullshit.

Also unsurprising: I related way more to Eeyore than I ever did as a kid, particularly the level of shade he throws (“You don’t have to tell me every time you find one,” he rumbles to Christopher Robin as he picks up Piglet’s acorns). I noted that Christopher Robin only really regressed into a childlike state when he was reacquainted with his misanthropic donkey friend, perhaps subconsciously enjoying once again tapping into Eeyore’s bottomless well of sadness. I really must write a boring essay on all of this one day, but this boring review will have to do.

Additional observations
- Piglet is now British. I’m not sure how I feel about this. Is this how the rest of the world sees us now? Nervous and foppish and porcine?
- I can’t compare this to the unrelated Goodbye Christopher Robin movie that came out last year, because I have literally never wanted to see a movie less.
- I thought it was a bit of a shame that Peter Cullen didn’t return to voice Eeyore. He voiced Optimus Prime AND EEYORE! Brad Garrett is fine but sounds like Brad Garrett voicing a sad donkey.
- My five-year-old liked it just fine, but I suspect he’s just in it for the popcorn.

More:  Christopher Robin  Winnie The Pooh  Marc Forster  Ewan McGregor  Hayley Atwell  Disney
Follow us on Twitter @The_Shiznit for more fun features, film reviews and occasional commentary on what the best type of crisps are.
We are using Patreon to cover our hosting fees. So please consider chucking a few digital pennies our way by clicking on this link. Thanks!