Review: Color Out of Space is high on promise but lands with a bump 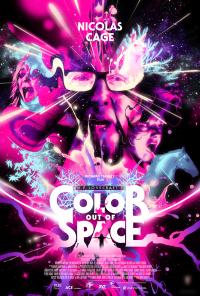 Richard Stanley is a tantalisingly distant figure in filmmaking. His filmography reeks of such pure talent you wonder why he's not a bigger name. The answer to that lies in the documentary Island of Lost Souls, which recalls Stanley's involvement in the ill-fated big budget 1990s take on The Island of Dr. Moreau. To say it didn't go well is an understatement, with everything from the elements to his erratic star Marlon Brando working overtime to derail things. Subsequently Stanley left the mainstream under a cloud (literally a cyclone), which is why Color Out of Space is being bandied as 'The Return of Richard Stanley' - given a fresh chance to bring a H. P. Lovecraft short story to life with Nicolas Cage in the lead. With such a dizzying rider it can't possibly live up to the hype, can it?


This is the stuff of gatekeeper dreams. Richard Stanley! Have you seen Dust Devil? I mean from the 5-disc collectors edition you can only import from Germany? Nicolas Cage! What's your favourite weird Nic Cage film? Not as weird as the one I was thinking about (Vampire's Kiss). Lovecraft! Oh that stack of books on my very eclectic shelves? Don't ask why they're still in the wrapper, just know that I've got more books than you and can read all the words in any of them at a moment's notice. It's a shame then that for all these elements, Color Out of Space is only so-so.

But don't read into that vague assessment too much: an average Stanley or Cage venture is leagues ahead of most other films, so in relative terms we're still getting a treat. Cage has his moments - not as unhinged as in Mandy but he's clearly well into it - playing Nathan Gardner, a citysort turned alpaca farmer ("the meat of the future" he claims to his impatient family) removed to the sticks with wife Theresa (Joely Richardson), witchcraft practitioner daughter Lavinia (Madeleine Arthur), stoner son Benny (Brendan Meyer), and third child Jack (Julian Hilliard). 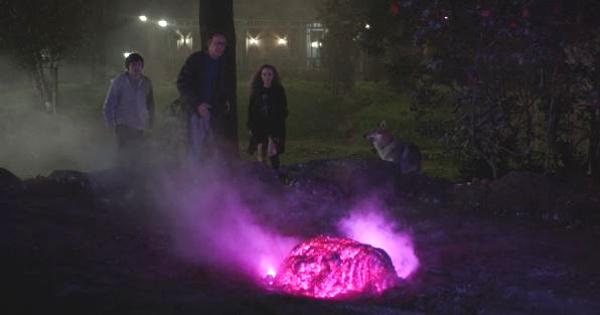 
The family are just about tolerating the boredom of the countryside, until things kick up a notch with the arrival of a big bloody rock from outer space - crashing down in their garden, and bringing with it a mysterious alien force capable of unleashing otherworldly terrors on anyone it comes into contact with. Conveniently timed to witness the resulting mayhem is Ward Phillips (Elliot Knight), a passing hydrologist who connects the dots when things start to go south for the Gardners and he detects a *dramatic pause* problem with the local water table!!

It's a bit of a thin setup, and it becomes clear pretty quickly we're on a downward spiral with nowhere for the characters to really explore - think Hereditary through a flesh-filled kaleidoscope, with a bit of Tremors knowing hokeyness and black humour thrown in the mix. Stanley has a natural gift for constructing a scene, which he complements with eye-melting effects to add psychedelic overtures, and there are even some disturbing physical creature effects and prosthetics - I hope Joely Richardson is remembered for what they put her through in this when whatever the horror equivalent of the Oscars comes around. 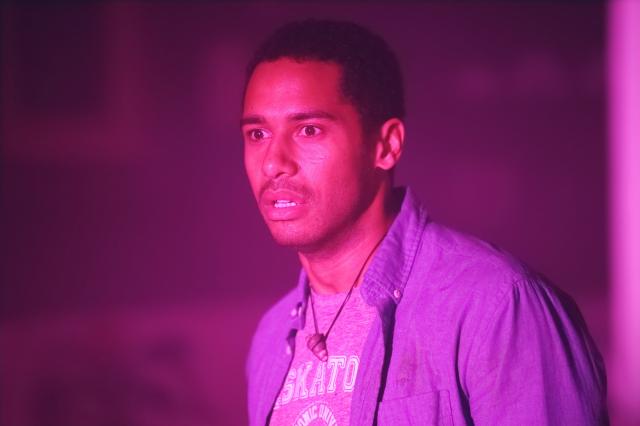 
Color Out of Space is very reminiscent of '80s films such as The Gate and From Beyond (itself a Lovecraft adaptation) in style, but as with any Lovecraft story it's the tone that needs to be handled right to justify the qualifier. Uncanny and weird is what we're looking for, but what we've been given is more distressing in a traditional horror sense. Incorporating drug use and witchcraft is all well and good as traits, but when used as cinematic shorthand there's got to be something else other than "the kooky one" or "the dopey one" to underpin our connection with the characters.

It's a difficult balance as by rights we should be following events from Ward's perspective - the outsider turned horrified narrator - but seeing as we also have to follow the family during their experiences which occur behind the closed doors of the farm, the two threads never feel intertwined enough to leave a strong impact. It may be that further viewings prove revelatory (and I'm keen to revisit if Stanley's promised Lovecraft trilogy materialises), but as it stands instead of curious gothic sensibility we have surface level psychedelic phantasmagoria.