Review: El Camino is a familiar dose that goes down easy (drugs) 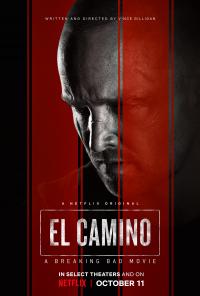 It would make absolutely no difference to anything whether Breaking Bad spin-off movie El Camino existed or not. If in a few years' time show creator Vince Gilligan responded to a fan question at a Comic Con panel with his plan for Jesse instead, the cultural impact would be much the same. That said, Gilligan can direct the hell out of the world he created and this re-visit is a reminder of the show's absorbing style, and of one of the central tenets of Bad: how much chaos can one person cause?


There's a really big explosion in El Camino. Like, huge. I'm not going to spoil what explodes, or why or when, but it honestly came as a surprise how big the explosion was. If you've got no interest in the further adventures of Jesse Pinkman, you may get a kick out of the explosion at least. Looks like it cost a fair bit of the environment too so you might as well have a peek because we're not getting that back. This is the most persuasive argument I have for people who bypassed the original series (which we covered here in... 2013? Jesus) or find the idolisation of a criminal hard to reconcile with.

Jesse was never the main draw of Breaking Bad. There are many slightly pathetic, morally dubious characters inhabiting that world, but they all lived in the shadow of Walter White and his megalomaniacal attempt to build an empire. At heart Jesse was a sweet boy gone wrong - as demonstrated in an early flashback (one of many which affords the return of past characters) where he tells wise old hitman Mike Ehrmantraut he's going to put everything right, to which Mike replies it's too late for that. 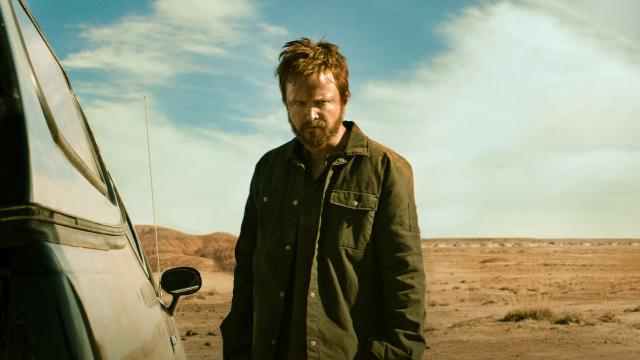 
Mike's not wrong: it was already too late after the first episode of the show, when Jesse decided to help Walter industrialise drug production and became an accessory to murder. So it seems a bit reductive in an epilogue nobody was asking for that we're asked to sympathise with a character who arguably got what they deserved. But if you can get on board with the notion that Jesse may have also been a victim of White's forceful, menacing Heisenberg persona, then I guess we can give him this one chance to take a next step on his own two feet.

"
"
Lots of plot but nothing of great consequence
So what does happen next, besides the explosion? Lots of plot but nothing of great consequence. Events pick up immediately after the closing scenes of the Breaking Bad finale - Jesse's joy turning to desperation as he goes from captive to fugitive, and decides to once more employ the disappearing services of Ed Galbraith (Robert Forster). Only Ed's holding a grudge from the last series, demanding twice his usual fee to make up for being left in the lurch. Jesse comes up short, and the resultant quest for cash becomes the main driver behind the rest of the story.

Not exactly Faust. But Breaking Bad was always smart enough to know exactly what it was: a kind of boy's own dark wish fulfilment fantasy for people who've played too much Ridge Racer on PS1 and watched Scarface too many times. The trick was never knowing whether the next scene would be a ridiculously outlandish plot twist, or a punch in the gut. The goal was to keep us coming back the next week, and we were hooked. Without Walt's spiralling insania keeping things on a knife-edge, however, we're left with Jesse reacting to his surroundings. It's fun, but never compelling. 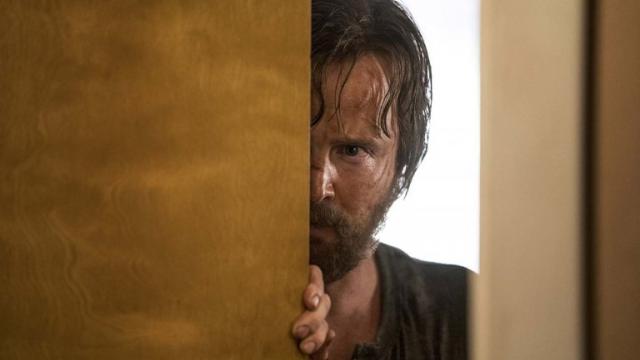 
The real revelation is Jesse Plemons' Todd Alquist character - seen entirely in flashback because, y'know, definitely dead - who brings such a chilling matter of factness to his own murderous crimes, you feel the room temperature drop whenever he opens his sweet simple face. Todd is what Jesse would be without any potential. Only Todd's willingness to kill completely devoid of emotion marks him out as more dangerous than Mike or Gus, or even Heisenberg himself. When those come for you it's for a reason; Todd kills because he *thinks* he's doing the right thing, and he's an idiot.

Nobody is holding a gun to your head to watch El Camino. If you enjoyed the original series and respect Gilligan's commitment to giving Jesse a send off, you'll probably get a lot out of this extra two hours of screen time. If you've never seen Breaking Bad then get a free Netflix trial and watch it - it's worth it. If you're done with the show after Walt's demise then feel free to give this a miss. If you want to see a really big explosion though, then I know where you can find one. Did I mention the explosion?