Review: Elizabeth Harvest brings a touch of class to the male wank fantasy 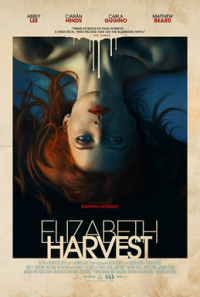 A few months ago I forced myself to watch Eli Roth's Knock Knock. It was a truly pathetic faux-apologetic excuse to show two young actresses naked, under the pretence it was all okay because they were getting revenge on shitty men. That's not to say I'm above looking at pointless nudity - I am a shitty man myself - but it has made me wary of how films are presented and my own sense of dismay when something turns out to be as grubby as you'd hoped it wouldn't be, even if a part of you secretly hoped it would be.


The Netflix autoplay teaser for Elizabeth Harvest is a sinister clip of Ciarán Hinds telling his sexy young wife he loves her, but she must never open the door to his mysterious special room in the house they share. The listing image has the same sexy young wife being held by a hand gripped firmly around her neck. And this is how they're trying to get people to watch the thing. It's got more red flags than Communist Russia, and should be a cause for concern the target demographic appears to be violent masturbators. If anyone knows their audience it's Netflix though right?

The sexy wife in question is the titular Elizabeth (Abbey Lee), who finds herself a proverbial bird in the gilded cage after bagging a rich complicated genius scientist husband, Henry (Hinds). Henry is so charming he plays piano at home in a suit, which initially placates Elizabeth as she adjusts to her life of swimming and being waited on by Henry's two live-in helpers, Claire (Carla Gugino) and Oliver (Matthew Beard). Eventually Elizabeth grows restless and decides to explore her luxurious trappings. And if you can't guess what happens next, then I'm not even sure how you've managed to read this far.

The new Next Home advert gets dark real quick


Yes, she opens the damn door. And then pretty much everything that happens after is spoiler territory, so we won't go there. I will say that the secret behind Henry T. Scientist's door - as obvious as you might expect if you have seen Elizabeth's vacant mannerisms in the trailer (and you're probably right tbh) - opens out into a very efficient setup for reveals and twists, making full use of the cast and then some. The surprises may not be the most revolutionary, but at least writer-director Sebastian Gutierrez isn't scared to switch things up, keeping you on your toes and proceedings ticking over nicely.

It's a good looking film too, if you'll forgive the phrase. Gutierrez has composed some memorable imagery, combining out of body nightmares with disorientating flashbacks, and even some sordid creepy voyeurism - but that should be expected given Elizabeth's desire to please Henry is key. Again, no spoilers but there are all perfectly valid reasons for this in the context of the story. Although that doesn't make me feel any less grim for watching, and a lot of where Gutierrez goes with Henry is more than slightly troubling.

So here we are: an actress' nude performance excused by a plot. Of course this is nothing new, and we've seen it celebrated countless times in recent years with Under The Skin, Ex Machina, Suspiria, The Neon Demon (which also featured Abbey Lee). I'm not about to co-opt feminism, and Lee may have been perfectly fine with all of the creative choices, but it jars that Hollywood still insists on telling stories about the ownership of women's bodies while literally putting those bodies on display to draw in gawping eyes.

Anyway, I think I've made the points I wanted to make and shall now stop clutching these pearls. Elizabeth Harvest is an effective enough sci-fi thriller which puts the science on the backseat in favour of shock twists. While there's an unfortunate irony in the area it tries to explore being its own clumsy undoing, that doesn't mean it should be totally written off. Just don't be surprised if you feel the need to scrub yourself clean afterwards.

More:  Abbey Lee  Ciaran Hinds  Carla Gugino  Matthew Beard  Dylan Baker  Sebastian Gutierrez  Netflix
Follow us on Twitter @The_Shiznit for more fun features, film reviews and occasional commentary on what the best type of crisps are.
We are using Patreon to cover our hosting fees. So please consider chucking a few digital pennies our way by clicking on this link. Thanks!