Review: Fahrenheit 11/9 is a lukewarm takedown of Trump

There are ambitious movies, there are overly-ambitious movies, and then there are 'Let's tell the story of Donald Trump' movies. By now it should be pretty clear that the tall tales of the Trump presidency cannot be adequately covered in a single documentary - we're surely in 'multi-season HBO mini-series' territory - but Michael Moore has attempted to document Chapter 1 of The Donald Trump Story, the story of the American dream turned into a waking nightmare, handily prefaced here with a perfectly succinct and necessary question: "How the fuck did this happen?"


Unsurprisingly, there is no easy answer to how the fuck this happened, or no satisfying answer anyway. What Moore does with Fahrenheit 11/9 is not concern itself with the various grotesqueries of President Trump's numerous misdeeds - wise, because he's already committed enough for a sequel - but tackle the root cause of America's decay: if Trump is the symptom, what is the disease? Sadly, this movie is the Man Vs Food of documentaries, biting off way more than it can chew; the result is a disappointing and scattershot doc with not enough shock and too broad a remit.

Moore's passion for the form is still evident, but he feels out of his depth here, frequently resorting to topics that have served him well in the past: corruption at a local level. Fahrenheit 11/9 is not entirely devoted to Trump - large sections of the movie switch focus from Washington to Moore's native city of Flint, Michigan, who have not had drinkable public water for four years. Moore attempts to draw parallels between Flint's water situation - an honestly horrifying act of flagrant government corruption - and Trump's ascendancy, but the connections are not expanded on further than 'this rich white asshole got away with this bullshit here, so why wouldn't this other rich white asshole also get away with other bullshit'. It's a subject that is clearly personal to Moore's heart, and the Flint sections see the director on form that suggests there's still fire in his belly, but this feels like a separate movie. 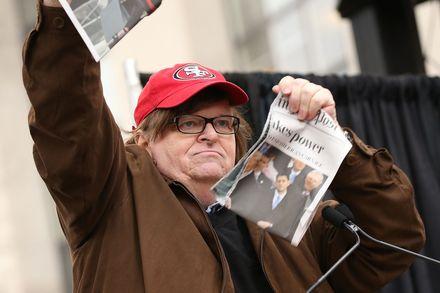 Holy SHIT did he just tear that newspaper in two? What a statement!


When he does orbit Planet Trump, Moore struggles to find anything that hasn't already been said about Literally The Worst Man In The World - there's nothing here that punctures the thickening numbness that's enveloping us all. It's all well presented and incisive enough, but if you stay informed - because how could you not these days? - then you probably already follow two dozen Michael Moores on Twitter, and there is no shortage of skidmark-laden dirty laundry for them to air. Netflix shows like Dirty Money sift through his financial connections, newspapers dive into his taxes, tabloids lay bare his affairs: a feature film documentary just doesn't cut through the noise like it used to in the era of Bowling For Columbine. Tellingly, Trump himself hasn't even bothered to publicly berate Michael Moore on Twitter, which should tell you exactly how unconcerned he is about the film's content.

So: there's no mention of his taxes, there's no mention of the 19 credible sexual abuse claims against him, nothing about the porn star he fucked and paid off while his wife was home with his newborn baby, nothing on Charlottesville save for a few montages, no heat on Paul Ryan or Mitch McConnell or any of the gutless GOP cronies that prop him up, very little on Steve Bannon or Jared Kushner or Paul Manafort or Michael Flynn, or Don Jr for that matter, and there's not much more than a single joke about Russian collusion. There are, however, jibes at Obama and Hillary and the DNC in what feels like a misguided attempt at even-handedness, although that is not to say I am disputing their accuracy (the stuff about Bernie Sanders getting shafted by West Virginia despite winning all 55 counties is particularly galling, but again: different movie).

Moore does find time to offer slim hope courtesy of young Democrats like Alexandria Ocasio-Cortez and her fellow grass-roots socialist campaigners, like the incredible Parkland kids, lobbying harder and effecting more change than politicians three times their age. The film's cast of characters is huge, introducing a few new faces like the ex-Marine mayoral candidate who is constantly itching for a "fist fight out in the street", yet it still feels unsubstantial as a body of work. Fahrenheit 11/9 does not tell the full story - because, honestly, how could it? It doesn't pull its punches - there is a quite literal Hitler parallel in its closing stages - but it feels like precious few of them land - and if you're anything like me, you're still dreaming of the knockout blow.

Additional observations
- I was preoccupied throughout this entire film thinking about what the defining movie chronicling the Trump era will be. Not apropos of nothing, I miss Philip Seymour Hoffman.
- I had to choose between a screening of this, or a showing of Venom. I'm still not sure which film would have made me angrier.

More:  Fahrenheit 119  Michael Moore  Donald Trump  Politics
Follow us on Twitter @The_Shiznit for more fun features, film reviews and occasional commentary on what the best type of crisps are.
We are using Patreon to cover our hosting fees. So please consider chucking a few digital pennies our way by clicking on this link. Thanks!